On June 3, Nickelodeon’s new film "Teenage Mutant Ninja Turtles: Out of the Shadows" hit theaters across the country. Well before opening night, Nickelodeon partnered with Wal-Mart on a cross-media advertising campaign to drum up excitement for not only the movie, but also the toys and accessories that would launch with it.

Beginning on May 1, Wal-Mart launched a rotating banner advertisement on its website promoting the movie release date (see the image below for the full cross-media campaign for TMNT). The banner remained on Walmart.com for the duration of May, and linked to product pages for the new TMNT action figures that would be available for kids exclusively at Wal-Mart.

To ensure consumers were aware of the partnership between Walmart and TMNT, the mass merchant amplified the ad messaging on its website through both print and digital channels during the week leading up to opening night. On May 26, Wal-Mart ran its first promotion for TMNT toys in an online display ad, encouraging shoppers to “Go Full Turtle Power at Walmart.”

The next day, Wal-Mart’s circular was distributed to shoppers across the country featuring an advertisement for the film on the cover and a full two interior pages promoting TMNT toys, games and other products. The retailer also launched an online video on May 27 reminding shoppers that Wal-Mart is the only place to buy the new lines of TMNT products.

After its circular dropped, Wal-Mart took to social media on May 28 to share content posted by Nickelodeon. On both Facebook and Twitter, Wal-Mart reposted (and retweeted) a message from Nickelodeon advertising both the movie and the accompanying retail products. The message included a video of a TMNT character opening a Wal-Mart box, only to find the new line of TMNT toys inside. 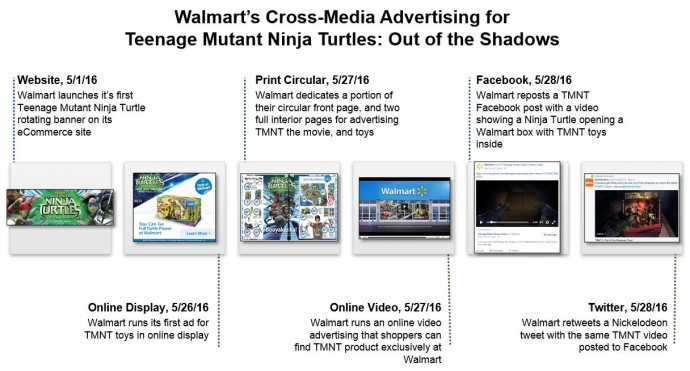 No matter where consumers engaged with Wal-Mart — online, social media, print circular — they were presented with ad messaging driving them to theaters on June 3, and to Wal-Mart stores to complete their TMNT experience. This omnichannel engagement formula has become commonplace for big movie and/or video game releases over the past few years. In addition to Wal-Mart, Target, Best Buy, and others have partnered with studios and publishers to build anticipation for films among consumers.

What made the partnership between Wal-Mart and TMNT especially unique, however, was the inclusion of a third brand partner in the campaign — Sun World International. According to an article on The Packer, Wal-Mart, Nickelodeon and Sun World joined forces on a joint marketing campaign to spread a healthy message among kids.

This month, Sun World grapes will feature a TMNT sticker on the packaging. According the article, consumers who purchase the two-pound package of grapes will receive $5 off the TMNT DVD release later in 2016. Commenting on the partnership, Natalie Erlendson, program marketing manager for Sun World, said, “We saw the popularity of the TMNT franchise as something fun and exciting to align our product with — plus turtles and grapes are a natural fit. They’re both green and loved by kids.”

Finding a unique value message is critical to establishing a deeper engagement with shoppers. Wal-Mart, TMNT and Sun World combined to not only offer compelling promotions to drive consumers to the store, but also to support healthy eating habits among America’s youth — a timely social topic that's sure to resonate with parents (maybe children) everywhere.

Succeeding With Back-to-School Commerce in 2022