In today’s highly competitive environment, it's exceedingly difficult for retailers to differentiate themselves enough to win one trip from shoppers, let alone earn their long-term loyalty. Successful retailers have aimed their focus at consumers, finding unique ways to not only deliver incentives to bring them to the store, but also to interact and build relationships with them.

This deeper level of consumer engagement has taken many forms in recent years. Macy’s launched its All School Lip Dub lip synching Challenge in 2014, a back-to-school sweepstakes that awarded the “most spirited lip dubbin’s student body” a $25,000 prize. The contest engaged students — key influencers in the back-to-school shopping process — in a creative and fun way.

During holiday 2015, Wal-Mart took the process of comparing prices online from shoppers’ with its Dare to Compare campaign. The mass merchant monitored competitor prices throughout the season, matching prices that dropped below its own. The effort showed Wal-Mart’s concern for both its customers’ wallets and their time.

The most recent example of a retailer forming a closer tie with consumers happened just last week. The Home Depot Foundation recently provided a grant to complete home repairs for a veteran living in Hattiesburg, Mississippi, according to an article in the Hattiesburg American (part of the USA Today network). Jasper Perry served in Vietnam and has been an active community member since he was honorably discharged in 1968. On June 7, the Hattiesburg Area Habitat for Humanity will work with staff volunteers and Home Depot to begin the repairs on Perry’s home.

Perry was injured while serving as Senior Airman in the 3960 Civil Engineering Squadron, but has since contributed a great deal to his local community. He has served as deputy tax collector for Hattiesburg and later got into politics by running for Circuit Clerk in 1978 and District 4 Supervisor in 1991. Perry received three medals for his service: Good Conduct, National Defense Service, and Declaration of Achievement.

Home improvement retailers have shown great support for the American military, as evidenced by The Home Depot’s work with Perry and its ongoing veteran programs. Last week, in the lead up to Memorial Day, several retailers ran advertising for their military veteran support programs. Market Track reviewed website and print circular promotions for Memorial Day, and found that in addition to Home Depot, Sears and Lowe's also showed their support for active and former military members.

Below is a sampling of promotions featuring specific services and discounts that benefitted U.S. service members. The Home Depot linked its “Team Depot” page on both the front cover of its May 26 print circular, and on its website on the same day. Lowe’s offered a service member-specific Memorial Day promotion in both its print circular and website that provided 10 percent off any purchases made starting on Memorial Day through June 6. Sears featured its Heroes at Home program on the cover page of its circular. The program helps with the rebuilding of military homes. 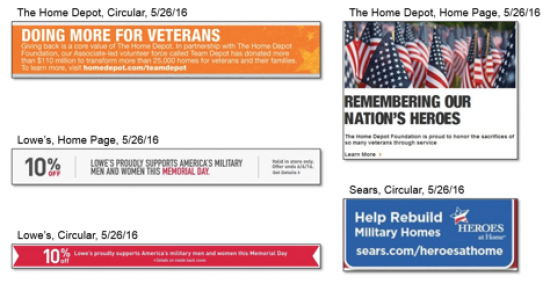 Building a deeper connection or sharing an experience with consumers can make a retailer stand out from the rest, which is critically important at a time in which consumers have more choices of where to shop than ever before.