The Amazon Effect: How Brick-and-Mortar Sales Have Trended the Past 2 Years

Amazon.com's recent Prime Day shopping event generated the “biggest day ever” in sales for the retailer. The online retailer reported that sales grew by more than 60 percent from the same 30-hour window in 2016.

This isn’t surprising; it seems as if it's Amazon against the world as of late. To help retailers better compete with the industry Goliath, Total Retail recently released a new research report, "The Amazon Effect: How Retailers Are Adapting Their Business to Better Compete With the Industry Leader."

The report analyzes the impact Amazon’s growing influence is having on the retail industry, and what retailers are doing as a result, from increasing spending on technology to implementing some of Amazon’s digital innovations on their own sites.

This week, we’re featuring a chart from the report that gives an overall view of how retailers’ brick-and-mortar sales have trended over the past two years, no doubt influenced by consumers increasing tendency to shop online (and more often than not, with Amazon). 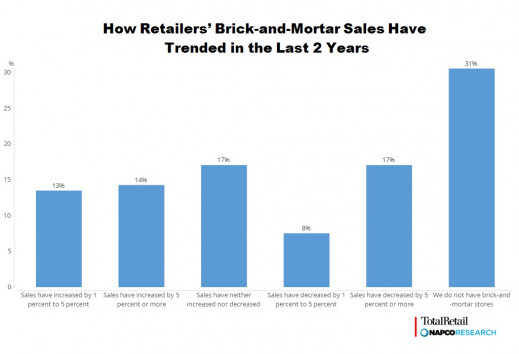 In the chart above, you can see that 31 percent of respondents said they don't have brick-and-mortar stores, and 17 percent of those that do have stores have seen store sales decrease by 5 percent or more over the last two years, indicative of the challenges that traditional brick-and-mortar retailers face in today's digital-first environment.

The retail sector is on pace for a record number of bankruptcies. Last week, True Religion became the 23rd retailer or consumer-oriented company to file for bankruptcy in 2017, joining the likes of Gander Mountain, hhgregg and Gordmans, which have all filed for Chapter 11. Others, like The Limited and Wet Seal, have gone out of business altogether this year.

A general trend we're seeing is consumers preferring the ease of shopping online via mobile, tablet or desktop, whenever it's convenient for them. Retailers will need to take a closer look at the role of the brick-and-mortar store going forward, and how it can be an asset to be better serve today’s omnichannel shoppers — and not a cost burden.

Not all is doom and gloom with brick-and-mortar retail, however. Twenty-seven percent of respondents report their brick-and-mortar sales have increased in the last two years, with 14 percent posting sales gains of 5 percent or more.

We’ll continue our coverage of the "The Amazon Effect" report next week with a look at how retailers’ e-commerce sales have trended the last two years. In the meantime, make sure to download the full report!

What CX Means for D-to-C Profitability

How to Cultivate an E-Commerce Ecosystem

4 E-Commerce Strategies for Retailers in 2022