A New Approach for Marketing to Back-to-School Shoppers

With peak back-to-school (BTS) shopping season a little less than a month away, early-bird retailers have already started marketing their upcoming sale events. Much like the holiday shopping season, retailers have used a variety of tactics to capture consumer attention before their competitors.

Among the more common strategies used to engage BTS shoppers early is advancing advertising and promotional schedules. While five years ago it was common to see the first BTS-themed print circular in the first week of August, today, retailers run BTS messaging as early as June — right after the close of the preceding school year. Likewise, it's common today for retailers to link visitors to their “Back to School” or “Back to College” online shop well before the start of the July through August BTS “season." The page may not feature their best deals until later in the summer, but at the very least it shows consumers that they're thinking about their upcoming needs.

Just last year, the BTS season saw an interruption in the form of Amazon.com’s inaugural Prime Day. No, Amazon's one-day sale event wasn't intended to be a BTS event, nor was it advertised as such. However, it took place on July 15, which was close enough to the peak early August weeks to convert BTS shoppers who needed to complete their school supply lists at some point before September. Prime Day offered a slightly earlier option that had the potential to save consumers both time and money. With Prime Day now an annual event (taking place on July 12 this year), retailers that rely on a spike in traffic and sales during BTS to meet their annual goals need to revisit their strategy. They must find new ways to incentivize consumers and keep them away from Prime Day.

Target has taken that new approach. The mass merchant is a destination store for many BTS shoppers, as it offers everything from stationery products for younger students to laptops and home goods for college students. To capture shopper attention early, Target is applying gift registry, a concept traditionally reserved for weddings, to this year’s BTS season.

According to Target's website, shoppers can “create a Target College Registry to outfit your dorm room with furniture, tech gear and more.” This strategy helps Target get itself on the mind of BTS shoppers earlier. The retailer is also providing incentives like free shipping on orders over $25 and 15 percent off remaining registry items when shopping online. Everything is guaranteed to arrive two weeks before the customer's first day of class, and Target promises a hassle-free return policy with exchanges available up to one year after the event date.

The College Registry was originally promoted in Target’s print circular on May 8 and again on May 22 — more than two full months before the traditional early August BTS shopping period. However, registry fulfillment didn't launch until early June according to an article by Target Corporate. The retailer is calling the service a “modern day twist on the classic college ‘care package.’” Target hopes its College Registry will work hand in hand with another digital tool it's using to innovate the BTS season — Target Subscriptions. This feature lets shoppers place recurring orders on Target.com for everyday essentials to be delivered right to their doorstep. 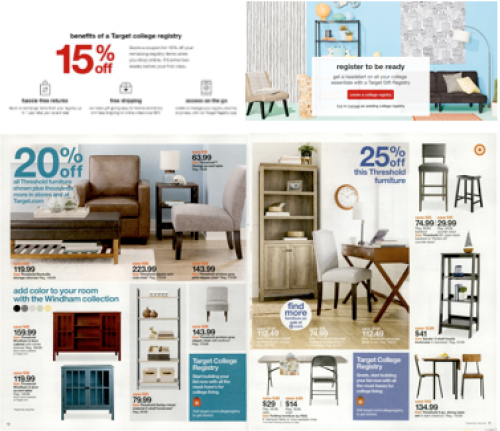 Market Track reviewed BTS promotions to get a better idea of the key periods in which they run. Over the past 24 months, 41 percent of stationery/school supply promotions have run during July or August. The chart below shows the biggest spikes in school supply print feature ads happened during this time as well. Target’s decision to promote its registry in May tells us that it's eager to take demand out of the market early for BTS. The registry not only made Target the first-to-market among big-box retailers with a BTS promotional message, but also gave shoppers a reason to buy early by allowing students to create their lists and share them with family and friends. 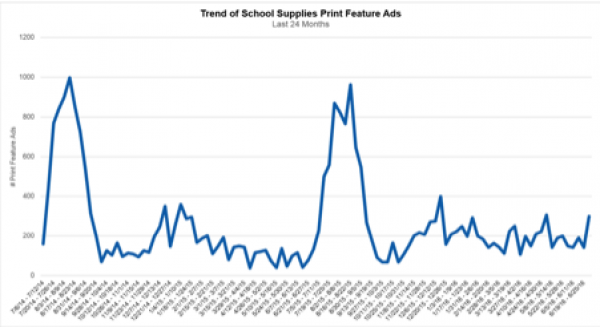 CEO: How J.Jill Serves All Women With New Campaign

4 Tips for Holiday Planning Based on BTS Trends