How Where Your Company is Headquartered Impacts Your Salary

How does where you work and live impact how much money you make? This is just one of many questions that Total Retail's 2018 Salary Benchmark Report provided answers to. The report was based on a survey sent to Total Retail's audience.

Retail executives’ salaries appear to be adjusted for the cost of living in the geographic region in which the company is headquartered. Respondents whose company’s headquarters are in the Northeast section of the country (New England: Connecticut, Maine, Massachusetts, New Hampshire, Rhode Island, Vermont; and Mid-Atlantic: New Jersey, New York, Pennsylvania) are receiving the highest base salaries, on average. This makes sense considering these regions tend to be some of the more expensive places to live in the United States. 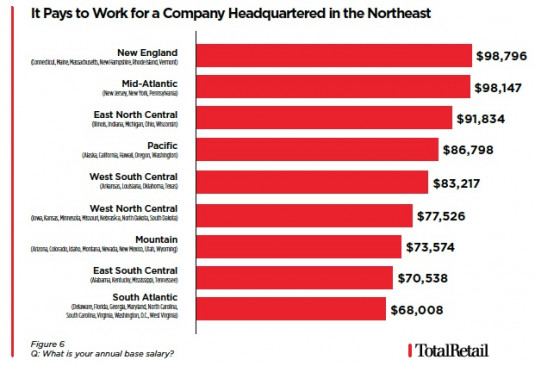 When evaluating total compensation (base salary plus financial benefits), respondents with company headquarters located in the East North Central region of the country (for the purposes of our survey, Illinois, Indiana, Michigan, Ohio, Wisconsin) are paid the most. The distribution in salary ranges between the top seven regions is rather close — $21,866 separates the first from the seventh region. Where we start to see a significant drop-off in executive compensation is for companies headquartered in the two lowest-paying regions: Mountain, with an average total compensation of $103,350; and East South Central, where average total compensation came in at $79,722. 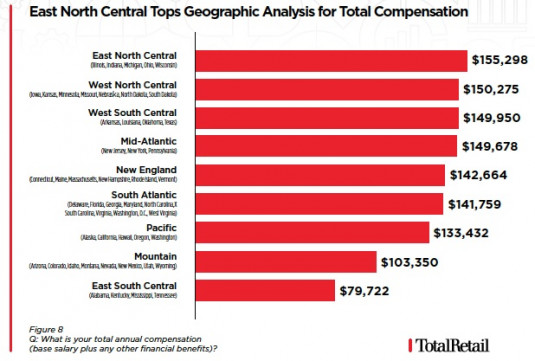 When considering job offers, compensation is just one of many factors to consider. Where you will live and will be working — and the commute between the two — should be carefully considered as well. The data above can provide a benchmark to evaluate the attractiveness of a job offer in a certain region.