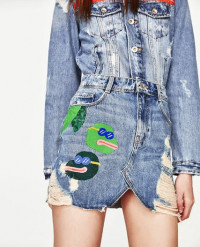 Zara recently withdrew apparel featuring a controversial cartoon image. The women's apparel retailer (owned by Inditex) has more than 2,100 stores in 88 countries, and is ranked No. 53 on the Forbes 2016 list of most valuable brands. The Washington Times reports Zara recently removed from its website a denim mini skirt with an image resembling Pepe the Frog, a controversial internet meme designated an alt-right symbol last fall, due to social media outrage. A spokeswoman for Zara told The New York Times, “The skirt is part of the limited Oil-on-Denim collection, which was created through collaborations with artists and is only available in selected markets. The designer of the skirt is Mario de Santiago, known online as Yimeisgreat. There's absolutely no link to the suggested theme.”

Total Retail's Take: This isn't the first time Zara has gotten into trouble for insensitive branding and merchandising. Most recently, the company ran a campaign to "Love Your Curves" with notably thin models, which also stirred up controversy on social media. In a connected world, social media has become the first avenue retailers need to check for customer service and other PR feedback. Another brand recently making the news with its marketing and advertising is Adidas. The brand sent an insensitive email about the Boston Marathon to runners.