Total Retail recently released its seventh annual ranking of the 100 fastest-growing publicly traded retailers. This year’s list, as in years past, is based on companies’ year-over-year net sales growth, comparing the 2016 fiscal year to the 2015 fiscal year.

A relative newcomer to the industry tops the list of fastest-growing retailers for the 2016 fiscal year. Founded in 2002 as CSN Stores before rebranding in 2011, Wayfair is the world’s largest online destination for home furnishings and décor, offering over 8 million products from more than 10,000 suppliers. Wayfair is the parent company of five brands: Wayfair.com, Joss & Main, AllModern, DwellStudio, and Birch Lane. 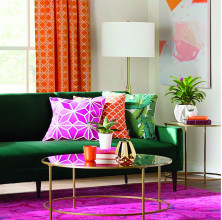 Boston-based Wayfair saw its net sales grow from nearly $2.25 billion in FY 2015 to $3.38 billion in FY 2016, a 50.25 percent increase. The online retailer currently counts 8.3 million active customers, and has more than 5,600 employees with operations throughout North America and Europe.

Key to Wayfair’s sales gain in 2016 were several new initiatives the retailer launched during the year, including an expanded product selection, a 2-D feature on Wayfair’s mobile app that lets users see furniture and décor in their homes before they buy, a partnership with A+E Networks to create the first-ever fully shoppable TV series, the launch of a wedding registry, mobile web checkout integration with Apple Pay, the opening of a research and development laboratory, and the launch of its Canadian website.

"The success we saw in 2016 is a direct outcome of what we’ve been building for the last 15 years," says Niraj Shah, Wayfair's co-founder, CEO and co-chairman. "Through an unmatched selection, exceptional service and technology innovation, we will continue to work towards redefining retail in our efforts to completely transform the shopping experience for consumers.

"At Wayfair, we believe that the long-term success of our business rests on our ability to delight and serve our customer. Our team is constantly developing, testing and improving to deliver a shopping experience for home that's not only exceptional online, but better than what can be offered in a brick-and-mortar store. As we look forward to the next 15 years of growth, we see even more opportunity to lead the way in bringing shopping for home goods online, and we will do it by staying true to — and building on — the core values that brought us here."

What's Next for Smaller Retailers in 2023?

NRF to Launch Big Show in Singapore in 2024

5 Methods to Grow Your E-Commerce Operations