Walmart's success doesn't depend on earnings, but rather the story it tells.

Amazon.com's revenue climbed since 1998, while net income stayed flat (per FactSet and Recode — see chart below), and Amazon stock rose 1500 percent in that time period. 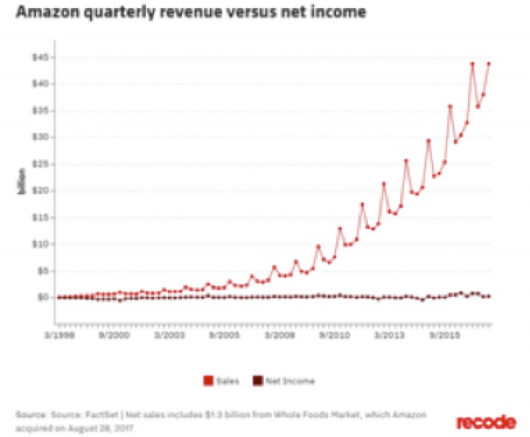 Walmart … welcome to the technology ball.

The biggest earnings quarter to watch for Walmart will be this year's fourth quarter, but the retailer's stock will be buoyed by the strategic story it tells for the next 18 months provided that its e-commerce growth continues at a 30 percent to 40 percent clip, and its acquisition spree continues.

The reversal occurred in 2015: Amazon's market cap eclipsed Walmart. But now, the hunt is on for Walmart to retake the e-commerce retail crown from Amazon.

It's personal. Years ago, Walmart tried to buy Amazon, and Amazon did a lot to replicate the logistical supply chain expertise of Walmart. While that was happening, Amazon bought a company called Quidsi (Diapers.com, Soap.com), which was led by Marc Lore. (Quidsi no longer exists.)

Rumor has it that Lore (now CEO of Walmart E-Commerce) was marginalized and kicked to the curb by Amazon, prompting him to start Jet.com, which was acquired by Walmart for $3.3 billion.

In a New York Times interview, Lore plays down any feeling of revenge against Amazon, but the story (whether true or not) fits perfectly with Wall Street. This is because Wall Street is all about the story and the psychology when it comes to technology, and Walmart is now morphing into a tech company. In fact, Walmart's P/E ratio is double that of Target. 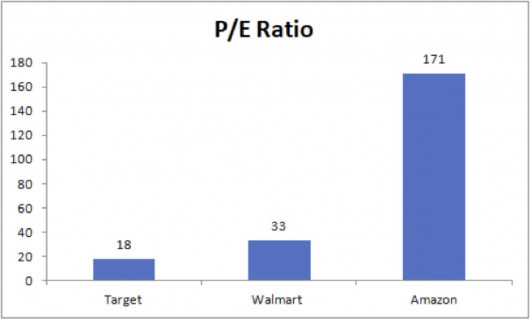 Earnings? No worries: Walmart has acquired Jet.com, Bonobos, ModCloth, and a $16 billon piece of Flipkart.

From an execution standpoint, if Walmart a) continues its acquisition spree; b) shares all logins across the Walmart family like Zappos/Amazon; and c) deploys best-in-class CRM and product association suggestions to increase average order value and order frequency, that's a three-point plan of success.

Strategically, just as Fox bought its way into TV with prized NFL rights in the early 1990's, and Oracle invented tech M&A, Walmart will do the same.

And at the helm is Marc Lore, a guy who wants to win, a guy who doesn't need the money, a guy with a big chip on his shoulder. An underdog.

Amazon has patents, Prime, and deeper electronic roots into its customer base. But Walmart has much better advertising right now, and a strategic advantage with its brick-and-mortar "Click & Collect" door-to-car delivery.

It will be fun to watch as Walmart hails, "Damn the earnings, full speed ahead!"

Mark Hughes is author of "Buzzmarketing" (Penguin/Portfolio) and CEO of C3 Metrics, a cross-channel advertising measurement and accountability solution.