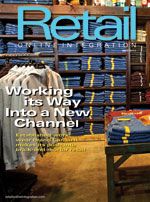 In today's cross-channel retail environment, a holistic approach to making any investment decisions — especially when it comes to choosing an e-commerce provider — is the name of the game. The process of choosing the right partner for your business can be a daunting one. H

7 Things You Should Know About Google +1

Recently Google announced the launch of +1 (yes, plus one, a name even more unfortunate than iPad), its version of the Facebook "Like" button. Google says +1 is shorthand for "this is pretty cool" or "you should check this out," and that it's designed to help you "share recommendations with the world — right in Google's search results."

A Marriage Made in Heaven

Ever since the first e-commerce website appeared, manufacturers have been smitten with the idea of transacting directly with consumers in the digital realm. However, some of their early attempts at online retailing offered poor customer experiences and didn't support their relationships with retailers. These days it's a different story.

An End to the Tax Holiday for Online Shoppers?

Dick Durbin (D-Ill.) is about to propose sweeping legislation that would impose a tax on all online purchases in a move aimed at closing states' budget shortfalls. Durbin's bill, dubbed the Main Street Fairness Act, intends to push online retailers to collect state sales tax on items purchased out of state. For more than a decade internet shoppers have enjoyed a sales tax holiday as a result of sales tax moratoriums established in 1998 to foster growth in the digital sales business. But with e-commerce businesses like Amazon.com no longer fledgling entities, and with states' budget deficits growing, imposing an e-commerce sales tax has become a hot-button issue.

Best Practices for Selling on Amazon

The key to success on Amazon is understanding and abiding by best practices to make sure your product listings aren't only found by shoppers, but also appeal to shoppers. Most importantly, learn how to optimize search terms, product descriptions, details, images and more to position your products to sell on Amazon.

Don't Burst Your Pop-Up's Bubble Before it Grows

A growing number of cross-channel retailers are turning to pop-up stores to launch products and concepts, generate buzz, build brand awareness, and dip their toes in the water of new locations. But something that might begin with a lightbulb-over-the-head scenario takes a lot more to put into action than the simple act of turning on a light switch, displaying an open sign and unlocking a door.

We all like to have our own ideas reinforced; it's difficult to hear the cold, hard facts. Like successful leaders and managers who are willing to speak up and be heard, I've identified 10 things company presidents don't like to hear. As good managers, it's your responsibility to speak the truth. So here goes:

Jessica London, a cross-channel retailer of apparel for plus-size women in the Redcats USA OneStopPlus.com division, launched a fashion blog in late January called PlusSizesDresses.com. Created to engage and interact with curvy women who love fashion and are looking for dresses that "fit and flatter" their figures, the blog offers fashion tips and insight on all things related to plus-size dresses in a fun and engaging manner.

For MEC (think the REI of Canada), the inability to simultaneously test pages or functionalities on its website led to a lot of head-scratching. Testing was a part of the cross-channel retailer's culture, but tests were run at different points in time. This often left MEC wondering whether the results of its tests were affected by outside variables (e.g., a holiday, free shipping promotion) unrelated to what it was trying to measure in the first place and, more importantly, if it was leaving money on the table.

Will Fits.me Fit Me?

Working its Way Into a New Channel

Recognized for its durable and high-quality products designed for working men and women, Carhartt has over a century's worth of trust built up with its customers. The cross-channel re- tailer has built that trust not only through its quality products, but also by engaging consumers on multiple levels: as a B-to-B/B-to-C hybrid brand; a wholesale supplier to thousands of brick-and-mortar stores throughout the country; and a direct retailer via catalogs and an e-commerce site. Carhartt believes company-owned retail stores is its next big opportunity.