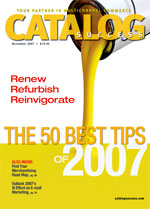 Ask the Right Questions to Get Your Metrics Positioned

Whether your catalog company is at $10 million or $150 million in revenue, there are questions about the key metrics of cataloging and Web marketing you should ask yourself — and know where and how to find answers — if you expect to regularly generate above-average profits. Here are the key areas; some are in the form of questions that I use when helping direct marketers prepare their strategic plans, raise growth financing or sell part or all of their business. Merchandising Q1. Describe your merchandising and buying function. Is it a “one-man show?” Q2. Who attends trade shows, makes overseas sourcing trips, selects final products? Is

People On the Move Coldwater Creek: Dennis Pence, who cofounded this multichannel women’s apparel cataloger 23 years ago, retired as CEO on Oct. 30. He’ll retain his role as chairman, however. President/COO Daniel Griesemer was promoted to president/CEO and will serve on the company’s board of directors. Griesemer joined Coldwater Creek six years ago. dELiA*s: The multichannel teen/tween apparel company has named Chris DiChiaro as the divisional merchandise manager of its Alloy division. Prior to joining dELiA*s, DiChiaro spent seven years as the vice president of merch-andising of intimate apparel for Victoria’s Secret Direct. dELiA*s also announced the hiring of Lee Bissonnette as senior director of

Draw Up Your Brand’s Road Map

We all need road maps, particularly us merchants. There’s so much good stuff out there to choose from, so many different directions you can take in merchandising your catalog, that you need to find ways to navigate. In my 20-plus years as a creative merchant, I’ve always made product fit charts my strategic tool of choice as I sift and sort through thousands of product possibilities for each brand’s offerings. I treat them as my merchandising road maps, driving me to the very heart of each brand I work with. They help me edit the multitude of products I see at trade shows

I often ask if you like what we’re doing and if there’s anything more we can offer in our print and online vehicles. Most of you say you get plenty out of Catalog Success, and you find it beneficial to cherry-pick from all the tactics and tips we offer. To that, I say, Neh! I think you’re wrong. I believe we can offer plenty more. But we need your help. More on that in a moment. This is the second November issue I’ve presided over, and it’s become one of my favorites. Along with the rest of the Catalog Success staff, I’ve scoured through all

CONSUMER The Green Thumb Ladies Masterfile The more than 10 million women on this file all are self-reported serious gardeners. They are mail order buyers who might be interested in offers for gardening publications; seeds, bulbs and nursery stock; herbs; gardening tools and accessories. The base list price is $75/M. The Big Lists, (201) 750-3222, www.thebiglists.com. Williams-Sonoma — Families with Children The more than 1.2 million buyers on this file have purchased from either the Pottery Barn, Pottery Barn Kids, PB Teen, Pottery Barn Bed & Bath, West Elm, Williams-Sonoma Home or Williams-Sonoma catalogs. These are upscale catalog, Internet and retail buyers of high-end home

Rather than the awe-inspiring equivalent of a moon landing as Microsoft had hoped, the rollout of Outlook 2007 instead has been greeted by the business community as a giant leap backward for e-marketing. That’s because Outlook 2007 regularly mangles most higher end image- and animation-dependent marketing e-mails, due to Microsoft’s decision to “dumb down” Outlook’s design and image-rendering capabilities. “Microsoft has taken e-mail design back five years,” says David Greiner, co-founder of Campaign Monitor, an e-mail tool provider. The problem’s been further compounded by the rollout of Vista, Microsoft’s new Windows operating system. It has forced consumers and businesses to adopt Outlook 2007 whether they want to

There’s a ton of power to be had from “speaking personally” to a prospect or customer. Writing copy that touches consumers personally connects to those who otherwise might not pay much attention to your catalog or Web site. Writing to them just as you’d speak to them — one on one and as a trusted friend or colleague — breaks down the barrier that often exists between you and all but your most zealous customer. The fatal flaw of writing impassively or impersonally shows up more dramatically in direct mail than in catalog. With your catalog, you at least have photos to support the

Tailoring Directly to Their Customers

Catalog established: 1980 Headquarters: Charleston, S.C. # of employees: 35 (full- & part-time) Merchandise: Men’s neckwear, shirts, eyewear, shoes, slacks, jackets, some women’s apparel Customer demographics: Professional men, 45-plus, who prefer traditional clothing # of SKUs: 5,000-plus WHAT GOT YOU HERE: Both Sue, the company’s president and daughter of Ben Silver, and Robert, managing director, earned law degrees and spent time working as attorneys. Prior to taking over the family business following Ben’s death, they worked together in the wholesale jewelry business. “We found that the items we were selling weren’t being promoted in a meaningful way,” Sue recalls of the wholesale jewelry business. So when she and Robert

Tailoring Directly to Their Customers: A Chat With Sue & Robert Prenner

Catalog Success: What are your catalog’s customer demographics? Sue Prenner: Professional men over the age of 45, but we’re trying to get younger. Bob Prenner: We’re in sort of a niche market for people who like traditional clothing. Sue: We like to say that it’s classic style and so for a long time the only people who recognized classic style were people who would be in that age demographic. But now it’s becoming fashionable, so they’re people who have never seen classic style before who are interested in it. But our price point is high so its going to appeal to the same

Since mailing its first catalog in 1983, Doctors Foster & Smith gradually has built a name for itself in the direct marketing pet-supplies business. But as of last year, the Rhinelander, Wis.-based cataloger still was searching for a way to propel itself to becoming a household name. So to boost its brand and name recognition, as well as build sales, it launched a TV advertising campaign. The company signed on with A. Eicoff & Co., a Chicago-based direct response advertising agency specializing in TV marketing. “We wanted people to get to know who we are,” says Gordon Magee, Internet marketing and analysis manager for

Say what you will about this wonderful trade we call the catalog/multichannel business, but whichever way you spin it, you can’t go very far if you’re unprofitable. That’s why above all else — the marketing, the merchandising, the creative, the e-commerce, etc. — we’re most interested in helping our readers make more money. So we bring you our annual binge of tactics and tips extracted from all of this year’s issues of Catalog Success, our weekly e-newsletter Idea Factory and our biweekly idea exchange e-newsletter, The Corner View. Our editorial staff went through every article we’ve produced this year to give you a nice,

Catalogers spend loads of time and money acquiring one-time buyers. But there’s more you can do to get these individuals to purchase again. Typically, fewer than half of your first-time buyers make a second purchase. With the high cost of mailing catalogs today coupled with lower response rates, most catalog companies acquire new buyers at an incremental loss. Catalogers must be willing to make an investment in acquiring a new buyer to grow, knowing the payback will come sometime in the future. The amount of time to payback the investment — normally one year — can be reduced by developing a strategy to

Why Accurate Addressing Matters More Than Ever

There’s a lot that’s already been written on both the passage of postal reform and the 2006-7 postal rate case. To your never-ending relief, I have no intention to speak to either issue here. Sure, your business life often depends on rate case. And the passage of the first new postal law in three decades is nothing to sneeze at. Nonetheless, it’s the “little stuff,” the seemingly niggling changes in postal rules and mail make-up procedures that can carry costs that might add more to the cost burden mailers have to carry than inflation-bound rate changes. As one of our board members likes to put

Woodworkers Catalog Can Easily Go From Good to Great

Osborne Wood Products positions its catalog as a full-service resource for woodworkers and artists, be it layman consumers looking for products to spiff up their homes or interior designers looking on behalf of their clients. With a few improvements and alterations, this catalog can attract an even broader audience and increase response. Front Cover There are several elements of the catalog’s front cover that give it a workbook appearance, from the holes punched near the spine (suggesting this is a reference tool to draw on time and again) to the photo of woodworking hands. The cover photo, positioned slightly askew with tape willy-nilly along