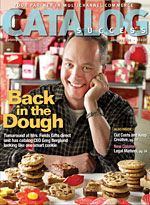 Are you on top of today’s hottest ideas in free and paid search? Here are 14 easy-to-implement ways to get your site to the top of everyone’s results. Each could support a full article in its own right, so I’ve also provided additional links to help you dig in further. Free Search Engine Optimization (SEO) 1. Social media sites drive links; links drive rankings. Get familiar with Digg (digg.com), StumbleUpon (www.stumbleupon.com), Netscape (netscape.com) and Reddit (reddit.com), because these social-media sites can drive huge traffic. More importantly, that traffic leads to numerous inbound links, which are the rocket fuel powering your organic rankings.

Back in the Dough

The exterior view portrayed a strong, stable company — a well-oiled machine churning along toward future profits and continued success. The interior showed an entirely different story — a company crumbling just like one of its cookies. Mrs. Fields’ early success actually led to the downturn of its catalog direct/online unit. With that early success and rapid growth, Mrs. Fields didn’t invest properly in the infrastructure (marketing database, systems, tracking) of the direct division, says Greg Berglund, president of Salt Lake City-based Mrs. Fields Gifts. What’s more, the company failed to keep product offerings fresh and relevant, especially the refreshing of photography and item

Looking to grow its brand and leverage its successful B-to-B catalog business, The Great American Hanger Co. last year launched a B-to-C catalog. Though considered a gamble at first, the Miami-based cataloger of specialty clothing hangers has reaped rewards from the book. A year into the new business, the consumer catalog already accounts for 27 percent of the company’s total sales. A Head Start Although the nine-year-old marketer had only sold hangers to such industries as retail stores, hotels, cruise ships and closet manufacturers until recently, it did have a head start in the consumer arena. High-profile customers such as Jennifer Lopez and Jerry Seinfeld have

“Our brand gets your shirts whiter!” “Our mouthwash keeps your breath fresh longer!” “Our battery lasts longer!” It’s no secret consumers are bombarded with generic comparative messaging. But while this is the norm in much of the advertising world, there’s no proof that it’s the right way to go. In fact, most consumers regard generalities as no more than opinion. Direct marketing tests have proven that the more specific a comparison is, the more valid the consumer considers it. This reveals a powerful tool for copywriters and marketers. And while it requires a little bit of homework, the payoff can be great. While many of us have

The clock already may have struck midnight on postal reform, but that doesn’t mean your catalog has to turn back into a pumpkin. There’s no need to strip it down in ways that sabotage branding, creativity and, most importantly, sales. Even within the design and financial confines of today’s postal rates and structure, the dream of an effective, financially viable catalog doesn’t have to be a fairy tale. Through postal reform the U.S. Postal Service is developing a more accountable rate-making structure, as most catalogers should be aware by now, replacing irregular rate hikes with more predictable and regular adjustments. It’ll take serious housecleaning

In the IndustryEye section of this issue on pgs. 12-13, you’ll find our second quarterly Catalog Success Latest Trends Report, a benchmarking survey we conducted in late November in partnership with the multichannel ad agency Ovation Marketing. This one focuses on key catalog/multichannel issues, and we’ve included most of the charts there, so I encourage you to take a look. You’ll be able to find some charts only on our Web site due to magazine space limitations. We also didn’t have the space to include the numerous comments that you — our readers and survey respondents — wrote in response to two of the questions.

Consumer Direct Media Credit Base The 153 million names on this file have been compiled from multiple sources, including the Internet and national demographic files. This database consists of data from a proprietary credit-scoring model called Credit Score Analysis in conjunction with demographic, psychographic and ethnic data. The base list price is $85/M. Direct Media, (203) 532-1000, www.directmedia.com. Affluent African American MOBs The more than 1.5 million 12-month mail order buyers on this file are affluent African-Americans with an average household income of $50,000 or more. Selects include lifestyle interests, household income, geography, children by age, length of residence, gender, homeowner and marital

It’s been nearly 10 years since the Direct Marketing Association (DMA) began requiring all members to follow its Privacy Promise. In 1998, faced with mounting concerns from legislators, advocates and consumers, we unveiled this self-regulatory initiative and aggressively enforced it. Since then, we’ve seen regulators and legislators impose restrictions affecting certain direct marketing sectors, specifically teleservices, health care and financial services, as well as those who market to children or adults online. But the self-regulation put in place years ago has served the mailing industry well. Now it’s time to take that to the next level. At the beginning of my lengthy career in

Tax-savvy multichannel marketers know “nexus” isn’t a new hair product or a high-priced automobile. The term “nexus” (derived from a Latin word meaning “to connect”) refers to the amount of contact an out-of-state retailer must have with a state before that seller is legally obligated to collect sales tax from customers. The Supreme Court’s landmark Quill v. North Dakota decision in 1992 made clear that, under the Commerce Clause of the Constitution, the nexus standard requires an in-state physical presence on the part of the retailer. In other words, mail order sales alone will not subject a remote seller to sales or use-tax collection

HOW DID YOU BREAK INTO THE CATALOG BUSINESS: With a thorough knowledge of computers. A former middle-school science teacher, Ann Killeen was introduced by a friend to Jerry Machado, who was then founding the Storybook Heirlooms catalog (now closed). In discussing working together, the two came to an understanding: “I said to Jerry, ‘I like computers,’ and he said, ‘OK, you’ll be the director of IT.’” Eight years later, after helping Storybook Heirlooms grow from a start-up company to a $30-million operation, Killeen had become fully immersed in the catalog business. She moved on to other catalogers, including Tzabaco, Boudin Bakery, Real Goods and

Strike While the Fed Dollars are Hot

Every August and September, there is a spike in federal spending. This is the annual “use-it-or-lose-it” period referred to as the “busy season.” Government agencies (federal, state and local) are allocated specific funds each year. If money is left at the end of the fiscal year, the agency doesn’t get to keep it; the money goes back to the Treasury Department. The federal fiscal year (FY) is Oct. 1 through Sept. 30, while most states are on a July 1 to June 30 fiscal year. The question then becomes, how does a company go after that end-of-FY “treasure trove?” Here’s where B-to-B catalogers stand to benefit

We bring you our exclusive new Catalog Success Latest Trends Report, the second quarterly joint venture with multichannel ad agency Ovation Marketing. This one focuses on the key issues in the catalog/multichannel business. As with our inaugural report last October, this survey contains a statistical analysis of a questionnaire we sent to the Catalog Success e-mail list in November. The responses came from 80 B-to-C and 45 B-to-B catalogers. You can click on the separate B-to-C and B-to-B charts below, as well as the cumulative chart. Some percentages don’t quite add up to 100, due to rounding.