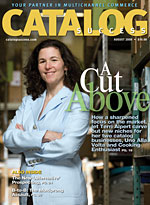 WHAT GOT HIM HERE: A failed catalog company of his own. After a brief stint working in television as a producer of a live talk show on cable TV, Chris Harris turned to direct marketing, an arena that always intrigued him. He founded his own catalog/multichannel company, the Graham Harris Trading Co., on a business model he formulated in college. His goal was to be the distributor of the finest men’s and women’s apparel and accessories available through the mail and online. For a while, it appeared he would do just that. Starting the company with “a balance of about $50 to my name,”

Catalog Success: Where’s the company headquartered? Chris Harris: It’s in Baltimore, Maryland. CS: What’s your customer demographic? CH: It’s a B-to-B client, which is primarily indoor malls, interior designers, the hospitality industry and retail chains. CS: What’s the primary merchandise offered in the catalog? CH: We sell commercial-grade holiday and theme décor. If you’re decorating an indoor mall or storefront, you’re going to want to buy around Christmas time or Easter or any holiday … you’re going to want to buy our theme décor products. CS: Do you strictly sell to businesses? CH: No, we do sell B-to-C. But

Eight years ago, Terri Alpert reacted to a serious “holy crap!” moment. It was a reaction that set her company, then known as Professional Cutlery Direct, on a far steadier course than it might have wound up. Alpert uttered the exclamation when she realized that, over a period of time, the high-end kitchenware catalog business she launched in 1993 with less than $10,000, which prided itself on exacting product detail and attentive customer service, was now being more or less duplicated by practically every large retailer from New Haven to Nevada. “Things were looking good at that point, too,” says Alpert, founder/CEO of

Site penetration — mailing multiple pieces to qualified recipients at one business location — is a proven response-boosting technique. At a minimum, multiple contacts indicate you’ve identified a significant business and not a SOHO (small office/home office) with one part-time employee. At its best, the technique can capture the entire market within your target company so you become its sole supplier. For some B-to-B catalogers, certain job titles, such as human resources director, can identify potential customers. But other catalogers can’t easily narrow their customer bases to a single contact. Their products appeal to employees across an organization with a variety of job

Problem: B-to-B safety products manufacturer Sperian Protection sought a more efficient way for its sales reps and customers to receive product images from the company. Solution: The company implemented a digital asset management (DAM) software system. Results: A sharp decrease in employee man hours spent on product image management. Product images and literature are instantly available to everyone in the company and its distributors. Eighty percent of all product photography is now done in-house. To simplify the processes involved in downloading product images, Sperian Protection uses a digital asset management system (DAM). As a result, the $1.1 billion multichannel B-to-B marketer of personal

PATIENT: The copy in my catalog has always been good. But the young people on my staff say it needs to be way shorter — that no one reads anymore. My older staff says I need to keep copy long so customers get all the information they need to buy. I want to keep up with the times, but I don’t want sales to go down. Who’s right? CATALOG DOCTOR: They’re both right, but you don’t need to choose. Your copy can be short and informative. The key is to organize copy in ways that make life easier for your customers. To see

Catalogers Sound Off On the Environment, E-Mail, Rising Gas Prices and More

In addition to the insights provided in print, here are a few more observations, tips and thoughts from a sampling of catalogers on everything from how environmental concerns have affected mailing practices to e-mail marketing strategies to what effect rising gas prices will have on the direct marketing industry and more. * On B-to-B and the environment, “I don’t think you’re going to find that in the B-to-B market,” says Peg Goelz, marketing communications manager for Shiffler, in response to whether environmental backlash has had any effect on Shiffler’s catalog prospecting. “I don’t think it’s as sensitive there as it is in the

The Literary Calligraphy catalog’s product collection is a blend of poetry and nature’s finest images, captured by calligrapher and designer Susan Loy. After reading its story cover to cover, I was hooked. I found the merchandise charming. Each piece appears specially chosen for its grace and inspiration, pulling messages from the Bible and much-loved authors. Art and copy teams work together beautifully in creating the items. Ironically, they weren’t as successful assembling the catalog, which just isn’t an effective sales tool. As a direct mail vehicle, Literary Calligraphy’s catalog needs to use the best practices of direct mail. The artwork inside the

Dear Editor, RE: The special report “Sustainability & the Environment,” (June 2008 issue, pg. 14). I was very pleased to see your issue devoted to the catalog industry’s response to environmental issues. It’s critical that we educate the public and legislators regarding the green benefits of catalog/direct sales over traditional store retailing. In June, I attended the American Catalog Mailers Association’s (ACMA) National Catalog Advocacy & Strategy Forum in Washington, D.C., which proved to be one of the most valuable events I’ve ever attended. There was a consensus among those attending that we are locked in a battle, fighting “do-not-mail” legislation that could

New York’s new nexus-expanding affiliate marketing law has generated considerable confusion and anxiety in the direct marketing industry. The legislation was signed into law on April 15, and now the second shoe has dropped in the form of a technical services bulletin (TSB) issued by the New York Department of Taxation and Finance on May 8 — TSB-M-08(3)S. The TSB purports to explain the new law and resolve some of the uncertainties arising from its vague statutory language. The good news is the TSB actually narrows the scope of the new law in certain important respects. It may provide comfort to catalog companies

While deterrents to mailing catalogs continue to mount (rising postage and paper costs, threats of do-not-mail legislation, environmental backlash, the Web’s rising popularity, etc.), the benefits of this marketing medium seem to have gotten lost in the shuffle. So it’s fair to ask the question: Are catalogs worth it anymore? We randomly surveyed a cross-section of multichannel merchants and found the following facts illustrating the catalog medium’s continued importance in most marketing budgets. • Shiffler, a B-to-B cataloger of school and facility furniture, supplies and equipment, this year launched its second catalog title, Facility Hardware. More than 90 percent of its revenue comes

My entire career since graduating from Indiana University in 1971 has been devoted to catalogs. There have been good years and off years. I can honestly say, however, that this is the most difficult and challenging year I’ve seen for catalogers. Gas prices, consumer debt and the national election all combine to create the perfect storm. In such tough economic times, it’s logical and necessary to reduce expenses and save where possible. But these cuts aren’t always made in the best places. Some catalogers have reduced page counts without doing a proper square-inch analysis. Many have eliminated mailings to Web-only buyers without proper testing.

When I first started covering this business back in 1986, I didn’t know what a catalog was — seriously. At least, not the kind we talk about from cover to cover in this magazine. My parents never received any catalogs in the mail in the Long Island suburb where I grew up, only store fliers. At least, I never saw any catalogs. And although later in life we’ve all become big catalog shoppers, we were strictly a retail-shopping family back in those days. So I spent the better part of my first year as associate editor at my former catalog biz publication

“Alternative prospecting strategies” almost seems like an oxymoron. The lines between traditional and alternative prospecting approaches have blurred — today all marketing is driven by multichannel consumers. So let’s define “alternative” as media other than mailing print catalogs to rented lists or paid search. Yes, we need to lump in paid search with traditional print mailings because search has become mainstream and is no longer considered an “alternative.” But what’s a cataloger to do if, as Marc Coan, owner of Made in New Mexico, points out, you want to come up with another way to prospect? “We have the infrastructure in place,” he notes.

New York law defines the term “resident” very broadly when it comes to affiliates. A “resident” includes not only companies incorporated in New York, but also any company “maintaining a place of business in the state” or “doing business in the state.” The new legislation also provides that contracting with an affiliate network provider for a link on a New York Web site will be treated the same as a direct agreement with the New York Web site owner. Remember, the burden of proof will be on the direct marketer to rebut the “presumption” created by the new law. The retailer must show there’s