The Amazon Effect: Retailers’ Perceptions of Amazon's Growth Over the Last 2 Years

Amazon.com's Prime Day is today, and retailers are taking different approaches to it. While some are joining in with their own deals and offers, hoping to capitalize on the increased volume of online shoppers today, others aren't quite ready to take on Goliath — at least without a little guidance. Enter Total Retail's latest research report, "The Amazon Effect: How Retailers Are Adapting Their Businesses to Better Compete With the Industry Leader."

The report analyzes the impact Amazon's growing influence is having on the retail industry, and what retailers are doing as a result, from increasing spending on technology to implementing some of Amazon's digital innovations on their own sites.

This week, we're featuring a chart from the report that gives an overall view on how retailers perceive Amazon's growth in the marketplace over the last two years. 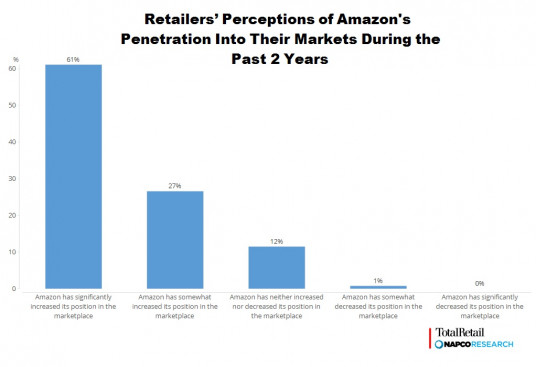 Amazon's exponential growth could be attributed to many things, such as its recent acquisitions, including Whole Foods Markets, new streaming partnerships, and investments it's made in Amazon Fashion. These moves have put Amazon in a strong position to grow and gain market share in various verticals.

It's clear the majority of retailers are noticing Amazon's takeover, and that it's extending beyond its traditional product verticals. New markets such as grocery, gaming and streaming services (let's not forget, an Amazon picture was nominated for an Oscar last awards season) have been targeted as growth opportunities by Amazon.

We'll continue our coverage of the The Amazon Effect report later this week with a look at how retailers’ e-commerce sales have fared in the last two years, and how Amazon might be an influence in more consumers opting to shop online. In the meantime, make sure to download the full report!