Most retail vendors have significant opportunities to improve their use of point-of-sale (POS) data to drive sales and reduce inventory issues. However, squeezing more insight out of POS data isn't easy. As data sets grow in size and complexity, analysis slows down. Most companies lack the resources required to identify problem areas because they're often found at the product, store, and SKU level.

In fact, 50 percent of brands are still using spreadsheets to analyze their POS data.

"Analysts aren't doing much analysis. They're collecting, collating and cleansing data. They're pumping out standard reports that people just look at and then move on. The focus isn't on analysis, and it needs to be,” says Eric Green, CEO and founder of Askuity.

However, what about the brands that are making the most of their POS data. Is there a difference in growth? To find out, Askuity conducted a POS data study that asked 350 brands how they're using POS data. The study found that even though the vast majority of brands review POS data, 89 percent of them reported at least one issue with their reporting method (see the chart below). 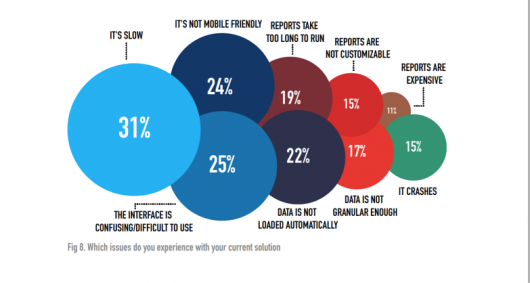 The No. 1 issue with POS reporting was that it takes too long. Remarkably, one in 10 respondents said it takes them 11 hours or more to download and format their data each week. This wasn't a surprise, given that 50 percent of brands indicated they're still using spreadsheets to analyze their data. This result presents a strong case for the need for brands to look into a purpose-built analytics tool. By automating the collection and harmonization of data, teams can spend more time uncovering profitable insights.

In turn, brands with fast, easy access to data insights were more likely to bring these insights to buyer meetings more often. Furthermore, they're getting the attention of retail buyers who trust their data-backed suggestions.

The brands that replied that their buyers "almost always" listen to their suggestions also reported greater than 10 percent sales growth in 2018, which outpaced those brands that didn't have their buyer’s ear by a factor of two.

Finally, the report reveals a true cost of being complacent. Those brands that indicated they didn't use a purpose-built tool also reported lower forecasting abilities, lost shelf space, lower sales growth, and higher out-of-stock rates than those that did.

The most important point this study proves is that simply having access to data is no longer enough. Brands that are using purpose-built analysis tools are growing sales faster than those that are not. As a bonus, the study also unpacks the No. 1 trend respondents reported as having an impact on their profits: Amazon.com, and offers three clever ways brands can capitalize on Amazon’s reach.

Sarah Adams is the marketing and communications Manager at Askuity, an analytics platform provider.

Sarah Adams is the Marketing and Communications Manager at Askuity.

Do You Really Know What Your Customers Think?

Too Much Data, Too Little Time