Loot Crate, a pop culture subscription box service, reaches out to prospects with an email-based quiz. 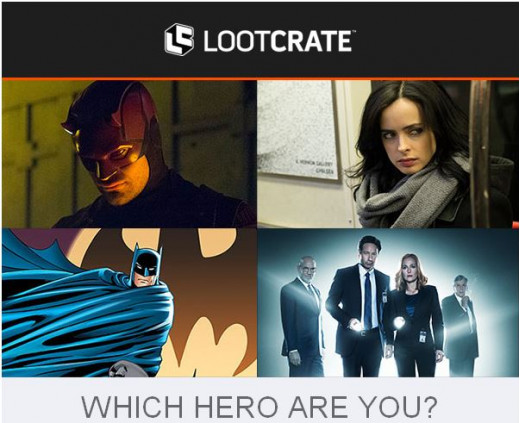 Founded in 2012, Los Angeles-based Loot Crate sells gaming, geek, and pop culture collectibles and accessories. Toys, apparel and other items cover a wide range of comic and sci-fi properties, from Halo to Harry Potter. As of 2016, Loot Crate had over 600,000 subscribers in the United States alone.

Prospects who opt in to receive email from Loot Crate receive a variety of messages to capture their attention and get them to subscribe for one of its boxes.

Loot Crate's latest subject line first flatters, then asks a question. “YOU. ARE. A. HERO. But which one?” The pre-header text explains a bit more, and with enthusiasm: “Take our quiz!”

Below the Loot Crate logo, a grid of four photos appears. Each image is of an iconic hero who likely resonates with the company’s target audience. Clockwise from left are Daredevil, Jessica Jones, the X-Files and Batman.

“WHICH HERO ARE YOU?” the headline below asks. The call-to-action button below clicks through to a five-question quiz on the Loot Crate website.

Personality quizzes are a staple of internet life. They’re hard for consumers to resist and, among other things, start a conversation with the quiz taker. Brands can build rapport as well as gain insight into what content resonates with their audience.

And here, Loot Crate is using a personality quiz to help it drive subscription box memberships. Depending on which “investigator” hero they identify with, shoppers can subscribe to a box associated with one of these hero franchises. 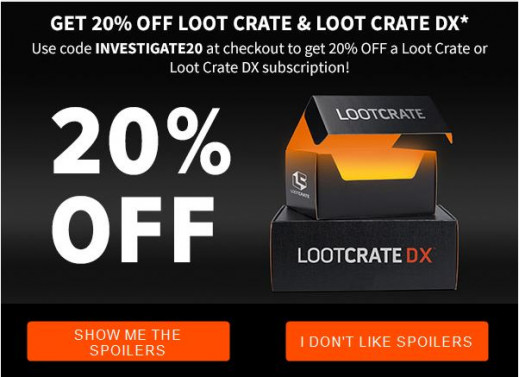 Regardless of whether they take the quiz, shoppers can sign up for Loot Crate using a 20 percent off discount code. It can be applied to either loot package, the basic or the premium option.

The Takeaway
Create a connection with your prospects by showing your brand’s personality.