Favorite book: "Getting Things Done" by David Allen
Favorite musician: Currently it's Regina Spektor
Favorite movie: This changes all the time! Can I pick a series instead? That's simple, it would be "Game of Thrones."
Hobbies: I practice meditation and yoga with the website Yogaglo and the app Headspace
Favorite vacation spot: Anywhere warm, tropical and beautiful. I went to a small island off of Rome last year called Ponza, and it was pretty much paradise.
Mentors in the retail industry: Andrew Jennings and Daniel Bobroff
What would you be doing if not working in the retail industry: I worked in advertising before I decided to take the plunge and start Shoes of Prey. Had I not collectively with my co-founders come to the conclusion that to succeed we needed to fail fast if we were going to fail, I think I would have shifted into the fashion world one way or another!

The last of our game changers is Jodie Fox, co-founder and chief creative officer, Shoes of Prey, an on-demand customized women's shoes retailer. Below is our interview with Jodie, which appeared in the summer issue of Total Retail. (And here are interviews with our other game changers: Meaghan Rose, Rocksbox; Luke Sherwin, Casper; Chris Lindland, Betabrand; Kate Doerksen, DITTO; and Rakesh Tondon, Le Tote.)

Total Retail: Where did you get the inspiration to launch your company?
Jodie Fox: I’ve always liked shoes, but I never could find a pair that I truly loved. There would always be something just a little off — the heel height wasn’t quite right or the color would be just a little different from what I was after. So I started having my shoes custom made. I loved being able to customize all of the beautiful details. When they arrived, they were unlike anything else out there and exactly what I had envisioned. I knew I was onto something when all of my friends started asking about my shoes and if I could commission their designs too.

My two co-founders, Mike Knapp and Michael Fox, were excited about the potential of online retail. They just needed a great idea. That’s how Shoes of Prey was born.

TR: What was the “ah-ha moment” when you realized that you might have a successful business?
JF: We broke even after two months. We had multimillion revenue in less than two years. Today, we’ve had more than 6 million shoes designed with us. We now also have five stores in the U.S. and one in Australia.

TR: How did you develop the resources and guts to start your own company?
JF: Shoes of Prey started because I was solving my own personal problem. I wouldn’t have thought of turning it into a business had it not been for my two co-founders. They were both working at Google at the time and really interested in the idea of online retail. All they needed was a really good idea, and customizable shoes was it. I’m very thankful that my co-founders and I supported each other and made the decision to take the risk and launch our business together. 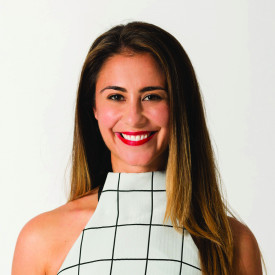 TR: What has been Shoes of Prey’s strategy for getting financing?
JF: We received our first funding injection in 2012, and to date, Shoes of Prey has raised about $25 million, with the majority of our funding coming from venture capitalists. Our work with Nordstrom and its subsequent investment are really exciting opportunities for us to pursue. It validates our mission to empower customers to shop without compromise, as well as our commitment to offering customers an unparalleled shopping experience. Collectively, the co-founders still hold the largest stake.

TR: What was the pivotal marketing campaign or channel that really catapulted the business in its early days?
JF: Our first really big milestone — getting people to learn about what we were doing and getting excited about it — was working with a YouTube blogger.

In March 2010, we found JuicyStar07 [Blair Fowler]. She had, at that time, about half-a-million subscribers and was posting three videos a week, getting more than half-a-million views. She did a 10-minute video about her experience designing the shoes, and at the end we ran a competition. The day the video went live we had half-a-million people visit the website, which was extraordinary. And we had 90,000 people enter the competition, which was amazing. We wrote a case study about what we had done and the immense power of a 16-year-old YouTuber to drive traffic to the website, and pushed that story out via Twitter and email.

I woke up the next morning with an email from someone from The Wall Street Journal, which wrote a feature piece on it, which was amazing. That’s when we got to our target audience. She isn’t watching 16-year-olds on YouTube; she’s reading the paper; she’s into news; she’s professional. And then we started winning awards for the campaign. Ultimately, it ended up tripling the business.

TR: How are you planning to scale the business?
JF: While we’re incredibly proud of our successes so far, I’m excited to keep growing the Shoes of Prey brand. We recently partnered with Nordstrom in the United States to open physical shoe design boutiques, so I’m looking forward to seeing what that will look like as we continue to establish our base here in the United States. It’s a truly an exciting new chapter for us!

We’re also continuing to expand our manufacturing capability. We have a talented team on board, and it’s an important part of the future of customization.

TR: Can you talk about your hiring strategy?
JF: It depends on the role we’re hiring for! But there are some things that always ring true. First, we hire slow. We try to get to know a candidate and for the candidate to know us as much as possible in the lead up to making an offer. Culture is as important as skill. I personally always consider if I could spend 12 hours in an airport with the person as I’m interviewing them.

TR: Can you point to a book, blog, podcast, etc., that you frequently turn to for inspiration?
JF: There are many things that inspire me, from old to new. Old buildings — just the way that things come together so perfectly, yet so unintentionally. When the paint peels, when cities age. If I could capture even one of these, it would be so amazing. But then I see something like Frank Gehry’s Louis Vuitton Foundation, a sci-fi movie or the clean, crisp lines of an ultra modern reflective material and I want to work with that too. There’s so much to take in and work with.

A game-changing book for me was “Getting Things Done” by David Allen. It helped me gain some perspective and set the guidelines that I needed in order to be my most productive self. My favorite magazine is Vanity Fair; I can read it cover to cover every month. I love Harper’s Bazaar’s imagery. I’m more of a visual person, so I love Instagram.

TR: What advice would you give to those thinking about launching their own retail business?
JF: Regardless of whether you’re an entrepreneur in the retail sector or a different industry, my advice is to act sooner rather than later and not to wait until you’re ready. As an entrepreneur, there aren’t courses or training that can provide the lessons you learn from just getting in and getting it done. You need to dive in, have confidence in your business idea and yourself, and do what you love. My business mantra has become “do everything before you are ready.”

In terms of launching a retail business, it all comes down to market research and understanding your customers’ needs — and finding a balance between the two.

The Key to Success for Retail in a Recession

How Wayfair is Prioritizing In-Store Innovation