eTail East: Summertime and the Living Was Easy

A sunny, 85-degree day in August. For most people, that meant heading to the beach for one last summer getaway. For the retail world, it signaled another eTail conference in Boston. This year’s eTail East featured content that should help attending retailers make the most of the upcoming 2017 holiday shopping season. Throughout the conference, attendees heard forward-thinking as well as some controversial themes in both general sessions and panel breakouts. 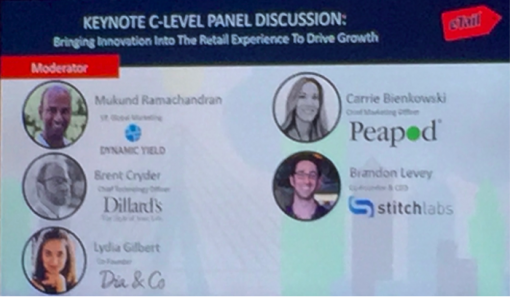 With Amazon.com investing $16 billion (yes, that’s with a "b") in its operations per year, there aren’t many retailers out there that can make enough investments to really compete head to head with the e-commerce giant. So, the next natural response is, “we need to be more innovative.”

In the C-level keynote panel titled “Bringing Innovation Into the Retail Experience to Drive Growth," Carrie Bienkowski, chief marketing officer of Peapod, was refreshingly honest on her perspective on the importance of innovation. Of course, she maintained that innovation is important, but stressed there should be a balance between innovation and focusing on basic e-commerce functionality, such as ratings, reviews, search, navigation and performance marketing. Her opinion is the balance should be about 70 percent basic functionality and 30 percent innovation. As a result, Peapod is always checking to ensure that it has the basics down for good customer experience first before it goes chasing after more innovative, shiny objects.

Likewise, in the “Fireside Chat” keynote, Rafeh Masood, senior vice president and chief digital officer at BJ’s Wholesale Group, highlighted four rules he uses in making site technology decisions. Masood noted that none of the four are really innovation-based. The first rule, “Is it simple?” focuses mainly on the simplicity of shopper experience, but could apply internally as well. Rule No. 2, “Is it fast?” pertains to whether adding new technology will impact page load speeds, which might impact shopper experience. The third rule, “Is it scalable?” addresses whether the technology can handle increased traffic volume and will it help the team become more scalable. The final rule, “Is it sustainable?” addresses whether the technology will have an ongoing, repeatable impact. 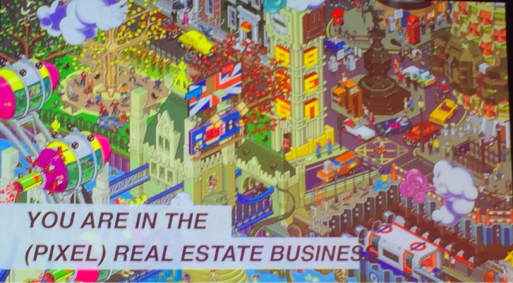 In the chairperson’s opening remarks, Makund Ramachandran, vice president of marketing for Dynamic Yield, noted that the user experience of an e-commerce brand is basically dependent on the hundreds of pixels, images and third-party tags that make up the site. Everything you show visitors is an important decision, so Ramachandran advised that retailers must ensure that relevant content is delivered quickly to online shoppers. This notion is backed up by Amazon and Wal-Mart, which have both documented that retailers only have three seconds or less to engage a shopper online.

Ramachandran also noted that regardless of whether it’s in-store or online, the old real estate adage still applies: it’s all about location, location, location! His call to action for retailers is to optimize their pixel real estate by prioritizing and sequencing all information being shared with shoppers. Additionally, while he advised not cluttering a site, he also recommended not holding back adding third-party technologies that could provide better experiences for shoppers. This falls right in line with the “don’t put your site on a diet” message I heard during several sessions at the conference. 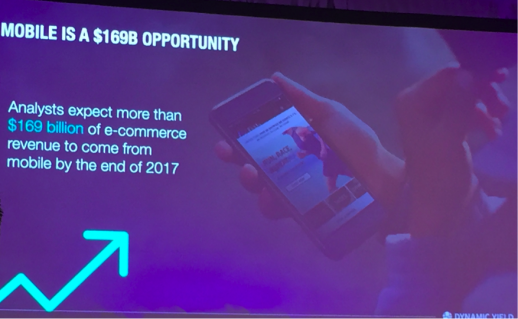 We all know the drill by now: The user experience/performance of your mobile site will influence revenue across all channels, so retailers better get it right. According to Jaysen Gillespie, Criteo’s vice president of analytics, 56 percent of in-store revenue is influenced by shoppers using mobile devices. His advice? “Retailers better make sure their digital experience is great and fast."  Supporting this sentiment, Rob Garf from Salesforce Commerce Cloud had a fireside chat with Emily Culp, chief marketing officer of Keds, about shopper-first retailing. In their discussion, Garf cited a recent consumer-based research project his company conducted with Sapient Razorfish that found that 59 percent of mobile shopper usage happens in-store.

Ramachandran also weighed in on this topic, noting that mobile retail traffic is now at 60 percent, with some retailers hitting 70 percent. However, while more consumers are shopping on their phones, mobile conversion rates still lag those on desktop. Ramachandran expects this to even out over the next few years, but as we learned from the Criteo presentation, mobile is still influencing 50 percent of in-store transactions.

With the rapidly growing mobile influence on both in-store and online revenue, it certainly makes you question if retailers are adequately valuing and investing in mobile. While there has been a great deal of investment in third-party technologies, navigation, amazing content and imagery, one foundational element — mobile site performance — is often missed. Without fast performance on both desktop and mobile devices, all the other investments you make on your site will fall by the wayside as shoppers bounce due to slow page load speeds.

RWD: Victory or Worst Thing Ever?

Speaking of Ramachandran, he made one of the conference's most memorable remarks when he stated that, “responsive web design (RWD) was the worst thing that ever happened to us.” This led to a lively discussion, since most retailers view converting to RWD as a major victory. Ramchandran’s take on RWD is having the same experience for all devices is a mistake as it causes retailers to “force fit” desktop experiences onto mobile devices. Furthermore, he contends that desktop weight in content, images and technology going to all device types ultimately impacts both performance and conversion.

Myles Burke, COO of Nine Line Apparel, talked about the mobile-first approach the brand took from day one to ensure the functionality needed for a great shopper experience on desktop works just as efficiently on mobile. As part of this, Nine Line Apparel decided to use RWD, and it enabled the retailer to quickly scale content across device types and turn on/off features based on device type. Burke did note, however, RWD comes with some downsides, such as the lack of a unique mobile experience and slower performance. And according to eBags, every second of mobile latency past three seconds results in a loss of 20 percent in mobile conversions. 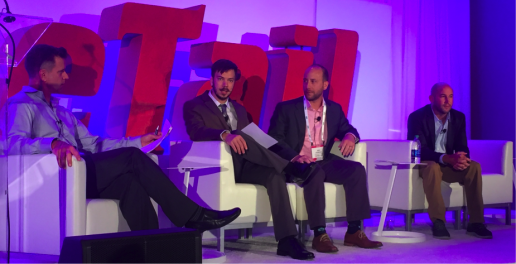 With Mobile, Great Performance is Critical

It was my pleasure to join Burke and Darren Johnson, product manager at BarkBox, on a panel about creating optimal shopper experiences. The conversation covered a lot of ground, and here are a few takeaways:

I believe one of the most important lessons learned at eTail East was the influence of the mobile experience on in-store revenue (influences 56 percent of it in total). This is a truly staggering number, and ties the mobile experience to 70 percent of a retailer's total revenue. While summertime weather is still lingering following eTail East, retailers better have their mobile strategies firmly in place to maximize revenue during the upcoming holiday shopping season.

Rich Stendardo is the CEO of Yottaa, a web and mobile optimization services company.

Retail Sales Dip in May Thanks to Inflation

How EQ and Creativity Fuel Growth at True Classic