Social Commerce: Back and Better Than Ever?

The fifth wave of social commerce

You heard all about social commerce last year. Pinterest’s “Buy” button, Facebook’s new “Shop” tab, and user-generated content (UGC) made headlines. But where and when did this all start? What makes any of these solutions different from their older iterations?

Ratings and Reviews
The story begins in the mid-1990s, when Amazon.com was gaining ground principally as an online bookstore. The company started letting shoppers review books, which became both a trademark and massive success. Ratings and reviews have remained popular since. 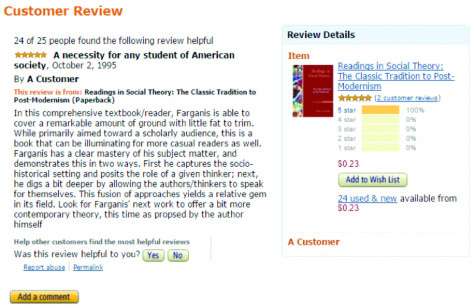 An Amazon book review from 1995

Rather than existing as a marriage of social media and e-commerce, reviews are social in that they feature UGC, written by users for users. Reviews have become more social since Amazon’s early days, with many UGC platforms allowing comments, likes and helpfulness ratings. One analyst calculated that in Amazon’s case, the addition of the question “Was this review helpful to you?” creates about $2.7 billion for the company every year.

Referrals
The second wave of social commerce consisted of sharing and referrals. These features sprung up around 2008, when MySpace was dying, Facebook was becoming huge and Twitter was emerging. As social media kept transforming and growing, it became more and more natural for users to talk about products and share information about them. Consequently, in 2009, the always-pioneering Amazon started compensating shoppers who included links to their site on Twitter and Facebook.

Sharing and referrals have remained strong since then. Dropbox, for example, used referrals to multiply its user base by 40 in one year. Uber and Airbnb have also seen great success with their referral programs. In the past year, Facebook has accounted for 50 percent of all social referrals, while Pinterest has accounted for 16 percent of all social referral revenue. Keep in mind that no matter how successful referrals and word-of-mouth marketing are, sharing is only one component of social commerce.

F-Commerce
The third wave of social commerce happened in 2011, when Facebook stores first appeared. Retailers like J.C. Penney, Gap and Nordstrom initially jumped on board, adding tabs to their profiles that let Facebook users browse and buy without leaving the social media site. However, this endeavor famously failed within a year. 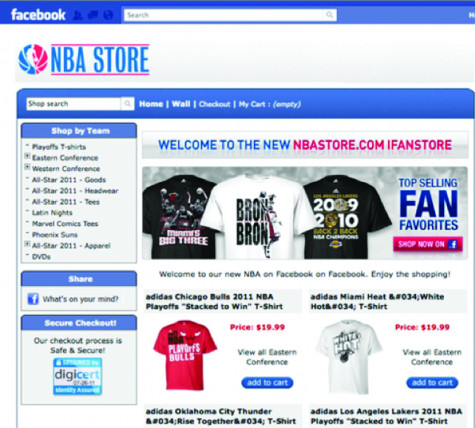 Facebook hasn’t given up on getting its users to shop, however. Consider Lolly Wolly Doodle, a children’s clothing company that blossomed as its founder posted Facebook statuses simply asking customers to comment with their orders. By integrating e-commerce with Facebook’s News Feed rather than making it a separate entity, Lolly Wolly Doodle has seen massive success.

Facebook has continued to try its hand at e-commerce. In 2014, the social network added a “Buy” button in both News Feed posts and ads. This past fall, Facebook started testing a “Shop” section. This separate tab aggregates product listings from various brands, much in the same way the News Feed displays posts from numerous users, groups and pages. Facebook has also recently experimented with Canvas, an ad format that displays products when users click.

Visual Commerce
The fourth wave of social commerce has been very tool-focused — i.e., all of the popular trends have been guided by specific technology rather than a more general marketing tactic. As Pinterest, Tumblr, Instagram and Snapchat have grown in popularity, we’ve heard a lot about the “visual web.”

Marketers have been quick to capitalize on this trend by creating brand accounts on all these platforms, as well as bringing visual web content and formats to their own sites. Visual commerce and/or visual merchandising tools let brands pull hashtagged images from Instagram, Twitter and elsewhere, which then go into shoppable, dynamic galleries on their websites.

Contests centered on visual web platforms (and other social media sites) have gained traction in recent years. You can find endless giveaways on any social site that shoppers use. Many contests capitalize on the aesthetic component of Pinterest or Instagram by asking entrants to create collages or take photos.

A separate fourth-wave trend has been social login — i.e., the capability to create an account on an e-commerce site using an existing social account. Whether using Facebook, Google, Amazon or PayPal, consumers find this option faster and more efficient than a regular account creation process. If users sign in with PayPal or Amazon, they don’t even have to enter their credit card information or address. Social login is extremely popular with brands for its ability to increase conversion rates.

User-Centric Social Commerce
The fifth wave is gaining momentum. It’s a holistic, consumer-focused approach across four or five networks at once, which I call user-centric social commerce. While different channels need different messaging at times, the aim is to create a seamless journey across every touchpoint. I look at the end consumer as one person who uses multiple methods to communicate with brands.

For example, 87 percent of consumers believe retailers need to put more effort into providing “a seamless experience.” Brands with robust omnichannel engagement tactics retain, on average, 89 percent of their customers, while those without strategies only keep 33 percent of them. Beyond matters of retention, shoppers who purchase in multiple channels have a 30 percent higher lifetime value than those who only shop via one channel.

What does this fifth wave technology look like? One popular strategy is looping social and in-store actions into online loyalty programs. Instead of merely getting points for creating an account or purchasing, shoppers are also being rewarded for writing reviews, connecting with brands on social media, uploading photos, checking into stores, etc. When all these actions are integrated into one central platform, consumers are more engaged and excited.

Another idea is to allow stockists of a certain brand to grant and accept that company’s loyalty points. For example, Olympus Camera has an online loyalty program, but its products are also sold in many other retailers’ shops. Thanks to an app, Best Buy can now let shoppers redeem their Olympus rewards.

A top priority of these multidimensional approaches is to turn loyalty customers into brand advocates, who promote and engage with your brand on several levels. They review your products, upload photos and use your hashtag, refer friends, and so on. They’re satisfied customers who like to promote your brand.

User-centric social commerce protects brands from future changes. While social networks will come and go, the viewpoint remains the same — customers are people with connections everywhere.

Al Lalani is the founder and chief strategist of Social Annex, a customer loyalty and social commerce solution provider.

From Soup to Nuts

4 Tips for Holiday Planning Based on BTS Trends

The Future of Retail: Trends for 2022 and Beyond
Comments
Subscribe
Find Resources