While Amazon.com may be a thorn in the sides of many B-to-B and B-to-C retailers, the reality is that a side effect of the growth and popularity of the online behemoth is that other retailers’ e-commerce sales are increasing as well. A rising tide lifts all boats, right?

This a was a key finding from the recent Total Retail and IBM report, The Amazon Effect: How Retailers Are Adapting Their Businesses to Better Compete With the Industry Leader. The report, which features data gleaned from a reader survey taken earlier this year, analyzes the impact Amazon’s growing influence is having on the retail industry, and what retailers are doing about it.

As the chart below shows, the majority of respondents to our survey reported that their e-commerce sales have increased during the past two years. This is particularly true for B-to-C retailers, with 55 percent saying their e-commerce sales have increased since 2015 (38 percent of which said their online sales have grown by 5 percent or more). As tends to be the case, B-to-B retailers are trying to play catch up with their B-to-C counterparts when it comes to e-commerce. More and more consumers are choosing to shop online (desktop and mobile) as a result of the popularity of Amazon, and this chart reflects that trend. 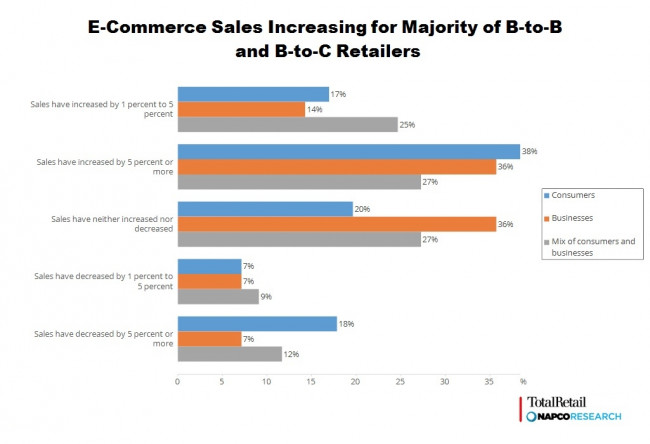 We’ll continue with our coverage of The Amazon Effect report in Thursday's issue of Total Retail Report, looking specifically at how brick-and-mortar store sales for B-to-C retailers have been impacted by the rise of Amazon. In the meantime, make sure to download the full report here.

The E-Commerce CX Bar is Raised Across Industries

How B-to-B E-Commerce is Changing for the Better

How Tech is Changing E-Commerce for B-to-B Brands

How B-to-B Sellers Can Own Their E-Commerce Future