Advance Auto Parts has hit the road for its fourth annual Mobile Tour. This year, there are two parts to the tour — the Restoration Tour and the VIP Tour. The tours stop at dozens of automotive and store events across the country, and kicked off at Daytona Bike Week back in March.

In partnership with Interactions, a retail solutions and experiential marketing firm, Advance Auto Parts is using elements of gamification, live events and a mascot to bring awareness to and increase membership for it Speed Perks loyalty program. Mancinelli says there are two main goals to the Mobile Tour: an increase in sales and frequency of store visits.

The Restoration and VIP Tours offer consumers the chance to interact with Advance Auto Parts at events they're interested in, therefore giving the brand the chance to connect with people in a “non-salesy” way where consumers live and play, according to Jen Rose, account executive at Interactions. Daytona Bike Week and NASCAR races, for example, bring out huge crowds, and many of those in attendance wouldn't regularly walk into an Advance Auto Parts store, says Mancinelli.

“We really want to do more to differentiate our stores, make our stores more approachable and make it the first stop for people when they need something,” explains Mancinelli, “whether it’s a part for their engine, or it’s just Armor All wipes and a battery.”

To promote sales during the Mobile Tour, Advance Auto Parts has a spinning wheel game where consumers can win prizes such as coupons, backpacks and drink koozies, but they only get a spin of the wheel if they sign up for Speed Perks (or prove they're already members).

“We want people to feel more welcomed to come to our stores and, hopefully, that will lead to higher comparative sales year-over-year, as well as more benefits for Speed Perk members to engage with us beyond just coupons and savings so they're more likely to come to us to redeem those coupons or earn coupons, or just become more loyal shoppers,” says Mancinelli.

During the tour, a puppy mascot named Tuxlee helps introduce Advance Auto Parts to a wider customer base, as well as promote its social channels. 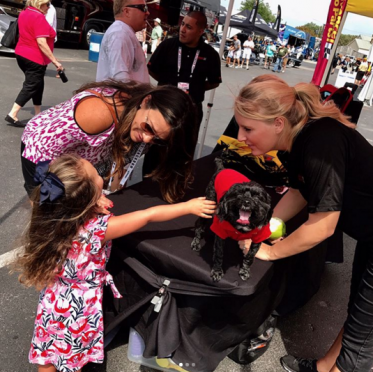 “It’s really exciting because we're trying to broaden our reach beyond just the traditional DIY-er that does a lot of his or her own work on the car, and make our brand and stores more approachable and inviting,” says Mancinelli. “By having him [Tuxlee] there with his Advance Auto polo shirt on, it makes our brand a little bit warmer.”

Mancinelli explains that families can stop by the Advance Auto Parts-branded truck and trailer hauling a 1967 Camaro RS and meet Tuxlee, take pictures with him and follow him on Instagram.

The branded truck also has screens that play video, like ads and scenes from other stops of the Mobile Tour, for people to enjoy. Attendees can also play the Master Mechanic video game to receive store coupons, and they're encouraged to share scores on social media using the hashtag #AAPRevItUp.

During last year’s Mobile Tour, Advance Auto Parts was able to interact with over 100,000 event attendees and register more than 25,000 new Speed Perks members. This year, with added experiences, Mancinelli hopes to connect with event more consumers. Additional experiences on the Mobile Tour include the following:

Courting the Influence of Gen Z in Real Time