3 Ways COVID-19 Has Crystallized the Future of Retail

Over the course of just a few weeks, the COVID-19 pandemic has permanently redefined large swaths of the American retail landscape. The global virus has forced brands to face a crisis of survival and relevancy that will have long-term repercussions for the shape of the retail industry. In response to the crisis, Amperity has launched an interactive microsite tracking consumer behavior across categories and channels from 100 North American retail brands.

The data paints a dire picture. According to data in the benchmark, overall retail demand is down roughly 57 percent. These losses are unevenly distributed across vertical sectors — some like food and health are performing well, while others, such as apparel and jewelry, are struggling.

While the past few weeks have led to great disruption and uncertainty, they’ve also crystallized lessons about how the retail space is likely to evolve. In some cases, these insights represent a nuance to existing trends For example, brands must continue to evolve digitally. However, physical stores still play a vital role in generating both retail demand and spending power. In some cases, these upend conventional wisdom.

Here’s what the data is telling us:

1. Retail stores remain critical as a driver of both consumer spending and spending power.

News of the coronavirus led some to speculate that e-commerce would soon absorb demand. In reality, the e-commerce spike in early March was little more than a short-lived blip. E-commerce, too, began quickly showing signs of decline. 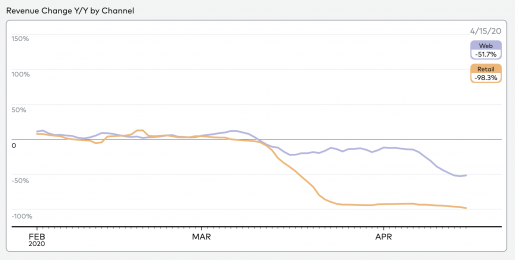 Over the past month in aggregate, e-commerce is down nearly 29 percent. The key here is to remember that retail stores aren’t just a distribution channel — they represent an entire miniature economy. The U.S. retail industry directly employs 29 million people and supports 42 million jobs. As large-scale furlough and unemployment have set in, consumers also have fewer dollars to fuel the rest of the retail industry.

2. Social and mobile — once thought of as fringe “growth” tactics — should be at the center of most brands' strategies.

Brands that have debated whether paid social and mobile should play a core role in their strategy now have a resounding answer. Consumers were already spending the majority of their time online within social platforms, and that trend has only accelerated since COVID-19 began. Individuals, reading the news and connecting with their communities, refresh their feeds more often, and businesses are turning to social media to shift their sales online. Social has proven to be the most durable marketing channel for retailers as they adapt to shifts in consumer behavior during the crisis.

Retailers, particularly the trend-conscious fashion and apparel sector, have long chased after younger consumers. However, the greatest demand resilience has actually been observed among older consumers — specifically, those ages 50 and up.

This indicates that older consumers (particularly those who aren't in the workforce navigating furlough and unemployment) are more financially stable and have already adapted their spending habits and, in general, may have more free time to shop. Counterintuitively, store closures, especially in the apparel sector, may have disproportionately impacted younger consumers, since stores generally don't cater to the merchandise assortment preferences, sizes or mobility constraints of older shoppers.

COVID-19 has provided the retail industry with a swift and shocking stress test, and its response under pressure provides us with a telling indicator of the future. It reminds us of the enduring power of the in-store experience, and the reliability of social channels for staying present with the customer in a changing environment. But it also reminds us that, even amid a drastic decline in overall demand, there are pockets of opportunity for retailers with customer data foundations in place to identify and leverage them.

Jordan Elkind is the vice president of product marketing at Amperity, the leading customer data and identity platform.

Related story: Why Digital Transformation in the Retail Sector is More Important Now Than Ever

Jordan Elkind is the vice president of product marketing at Amperity, the leading Customer Data and Identity Platform.

How to Recession-Proof Your BFCM E-Commerce Plan