Even though the potential strike at UPS hasn’t yet been averted (the current labor agreement is set to expire July 31, and the two parties haven't ratified a tentative agreement), the company has decided that now is a good time to impose intra-year rate hikes. UPS already changed its fuel surcharge tables for air export in April. On June 4, it added a fee for shipping charge corrections (SCC) and increased over maximum limits and oversized pallet handling charges. Finally, UPS is increasing the additional handling service (AHS) charge as well as large package surcharges (LPS), effective July 8.

Collectively, these changes represent yet another major intra-year rate hike for many shippers, and require additional explanation.

In April, UPS split the fuel surcharges for Domestic Air and International Air Export. Export used to have the same fuel surcharge as domestic air. Import has been different for over a year. With this new logic, the export fuel surcharges are significantly higher as illustrated below. This new fuel logic is an extra 1 percent to 2 percent on the cost of your export shipment. 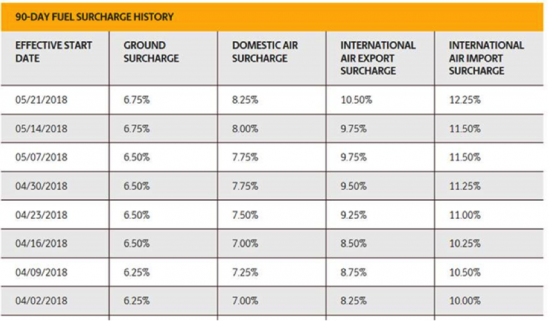 To add to the complexity, the tables used to determine the air fuel surcharges are also different. They're both based on the DOE commodity index for U.S. Gulf Coast Jet Fuel, but the bands are narrower for the international table. In other words, shippers will experience greater fluctuation in fuel costs for international packages. (See table below for details.)

Effective June 4, UPS introduced an audit fee for SCC. This fee, the greater of $1.00 per adjusted package or 6 percent of adjusted revenue for the invoice week, will apply whenever the average SCC in an invoice week is more than $5.00.

Some of the triggers for SCC are as follows:

One important fact about this charge is that it applies only if the average correction is greater than $5.00. Essentially, UPS is allowing mistakes, but consistent and/or egregious errors will result in the penalty. See the below table for examples on when this fee would and would not apply.

But wait, there’s more! UPS also increased the over maximum limits and the oversize pallet handling surcharge by $150 on June 4. This charge was increased by 233 percent to $500 in December 2017, and six months later, it jumped to $650. It's a penalty for shipping packages that are beyond the limits specified in the UPS tariff. By contrast, FedEx’s version of the fee (“Unauthorized Package” fee) is “only” $300.

Finally, stay tuned for details about UPS’s yet-to-be-announced “peak” surcharges for Q4. Like it did in 2017, UPS will announce additional surcharges for residential deliveries and larger packages just in time for the 2018 holiday season.

Shippers, of course, recognize these intra-year increases come on the heels of general rate increases imposed in late December 2017.

Why is UPS imposing these additional rate hikes on their customers at this time?

Well, because it can. There are only two private national carriers (UPS and FedEx). Historically, whenever one carrier announces a rate increase, the other follows suit. And with few alternatives in the shipping market, the shipping public simply pays it.

To be fair to UPS, the charges for SCC and increases for oversized packages are the company's way of modifying the behaviors of shippers that result in higher operating costs at UPS — or get their customers to cover more of the expense. The latest SCC surcharge will similarly force shippers to more accurately weigh and enter package dimensions. When they don’t, UPS incurs additional costs to calculate and invoice corrections.

We've seen UPS affect shippers’ behavior in recent years through pricing action. Dimensional pricing was designed not just as a way to enhance revenue, but more importantly, as the primary way to get shippers to more densely package freight. Smaller, more densely packed boxes equate to UPS being able to handle more packages on existing truck and aircraft assets.

Similarly, egregious rate hikes on certain package profiles have resulted in shippers tendering those packages to alternative carriers. Don’t like the $650 over maximum limits charge? That’s fine, says UPS. Find another way to ship it.

What Does This All Mean to Shippers?

It's getting more complex to figure out UPS shipping costs. There are now four fuel surcharge tables to monitor and additional penalties for sending inaccurate shipment information. If you're frequently charged for AHS, LPS, over maximum limits, and/or pallet oversize fees — or you’re one of those shippers whose invoices frequently show a wide margin between actual and billed weight — you'll want to take steps to ensure your team is transmitting accurate billing information and take measures to mitigate these intra-year rate hikes from UPS.

It also means shippers may want to consider a multiple carrier strategy, using UPS for those packages that are most cost effective, and other carriers like FedEx, USPS, regional parcel carriers, etc. Smart, multicarrier shipping solutions can remove the guesswork and route packages based on least cost.

As always, we stand ready to help as needed. Good luck!

Rob Martinez, DLP is president and CEO of Shipware LLC, an innovative parcel audit and consulting firm that helps volume parcel shippers reduce shipping costs 10 percent to 30 percent. Keith Myers is senior consultant, professional services at Shipware, where he works on analyzing and optimizing parcel agreements for high-volume shippers. They welcome your feedback and comments, and can be reached at rob@shipware.com and kmyers@shipware.com.