Oops … They Did it Again! FedEx Increases Fuel Surcharges On All Products 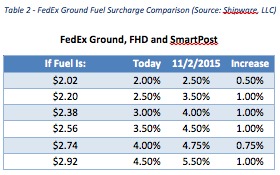 The changes reflect yet another increase in the same calendar year. On Feb. 2, 2015, FedEx Express and International services increased their fuel surcharges by as much as 4 percent (see Table 3 below).

Of course, UPS followed FedEx’s lead and also changed its fuel surcharge tables in February 2015 (see Tables 5 and 6 below). 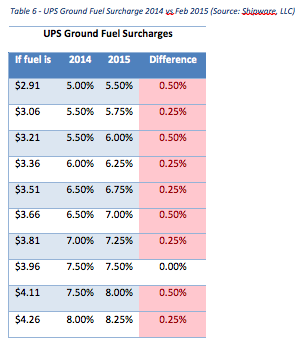 Whose fuel surcharge table will be a better choice for shippers once FedEx adjusts its fuel index on Nov. 2?

Assuming UPS doesn't again adjust its fuel surcharge index, when fuel prices are lower FedEx will continue to maintain a slight advantage over UPS. However, when jet fuel is $1.50 or higher and diesel $2.84 or more, FedEx and UPS fuel surcharges will essentially match (see Tables 9 and 10 below). 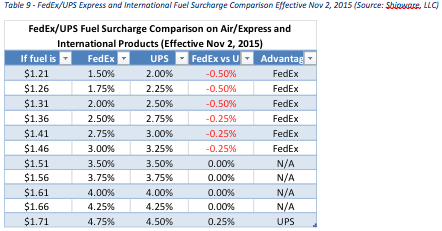 Of course, FedEx understands fuel prices won’t be as low as they are today forever. However, introducing the increase to its customers at the current cost of fuel, FedEx can tell its customers that it's still lower than UPS, perhaps softening the blow of yet another increase.

It’s also interesting to observe a reversal in pricing strategies at FedEx. From 2007 to 2013, FedEx general rate increases (GRIs) were always announced in conjunction with a reduction in fuel surcharges to partially offset the increase.

However, in 2015 there was no offset for fuel. The GRI was the same 4.9 percent net, but in February 2015, shippers were hit with as much as a 4 percent increase on fuel. The net impact, of course, is a lot higher than 4.9 percent. And in 2016, the GRI is 4.9 percent with no offset, with fuel surcharges increasing as much as 1.75 percent. A higher net result is achieved again.

One final zinger to FedEx customers: FedEx SmartPost DAS surcharges are more than doubling in 2016 and non-machinable surcharges are going up 16.8 percent (see Table 11 below).

While last year’s dimension-based pricing and other FedEx and UPS revenue management actions led many pundits to call it the “mother of all rate increases,” the aggregate impact of the announced 2016 GRI, fuel surcharges and special handling rate hikes is proving to be no less potent. Forewarned is forearmed. As always, good luck!

What’s in Store for Last-Mile Delivery in 2022

How to Avoid ‘Shipageddon’ This Holiday Season