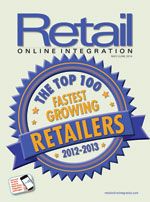 Big data has been a buzz phrase within the retail industry for the past year or more. That said, get 10 retailers in a room together and you might get 10 different definitions for what the term means. For Rue La La, an online flash-sales retailer of women's fashion apparel and accessories, big data meant connecting information across vendors to help it create targeted marketing campaigns to reactivate dormant customers.

Publishing content is a unique breed of marketing and promotion. Unlike traditional means such as banner ads, live events, offers, etc., content marketing isn't directly promotional. Rather, it's about coming up with content that informs, entertains or inspires your audience. So how exactly can you use content marketing to your advantage? Below are a few best practices and examples of what you can do to take your e-commerce content marketing to the next level:

Force Factor, a sports nutrition brand founded in 2009 by two Harvard University rowers, launched a display advertising campaign in April for its Test X180 Ignite supplement. The campaign has delivered a clickthrough rate (CTR) of 0.86 percent, which is more than eight times above the industry standard. The ad, a 300x250 above-the-fold placement, runs across SportingNews.com, a top 10 U.S. sports site that reaches millions of unique sports fans daily.

Online marketplaces are a considerable accelerator of e-commerce adoption around the world. Marketplaces make it easy to buy online by offering a variety of products and deals, storing payment and shipping information, providing easy mobile access via apps, and allowing buyers to read and compare product reviews for multiple retailers.

When informed shortly before the all-important holiday season that its web optimization service was no longer being offered, Clarks founds itself in a position where it needed to quickly find a replacement to continue to maintain service levels and get it through its busiest time of the year. Already having an existing relationship with Yottaa, a mobile and web performance optimization company, Clarks opted to implement its Engagement Cloud solution.

Approximately 60 percent of consumer catalog sales and 55 percent of total orders generated annually are received during the holiday season (October through December), according to data we compiled at Lett Direct, Inc. This three-month period represents all or most of the profit for catalogers during the year. Therefore, it's critical to make certain your business is hitting on all cylinders during the busy holiday season.

We're excited to bring you our list of the 100 fastest-growing omnichannel retailers for the 2013 fiscal year. To compile this year's list, we researched 2013 fiscal year net sales figures for all the public retail companies in the U.S. and Canada. We then compared those numbers to the previous fiscal year's net sales. After we calculated the percentage change year-over-year, we ranked each company in descending order to arrive at our top 100. We've also included select profiles that highlight specific companies on the list. Enjoy!

Are you ever at a loss for what to include in an upcoming email campaign? Calendars can be a very useful tool to keep your emails fresh, lively and timely. Let's examine what should be in your calendar and how detailed it should be for the short and long term.

The Value of Social Currency

I have to be honest, every time someone mentions "social currency," I immediately wonder what the catch is. Yes, social media is a powerful marketing channel for brands and a great way to engage with consumers, but retailers know all too well that a slew of Facebook Likes or #mentions on Twitter doesn't always yield a strong return on investment. So, what's a mere 140 characters really worth to a brand? Apparently, around $20 bucks.