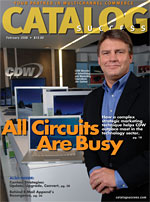 Struggling to convert the sleek, fashionable look of its catalog into its e-mails, Chiasso decided a creative redesign was needed. “We have this great catalog that we put together and mail out, but in the e-mails, images were being cut out,” says E-Commerce Manager Brian Mehler. “There were six images that were cut out and put onto a colorful background with a message, but it was hard for customers to actualize that. They’d see an item in the e-mail with a green background and couldn’t imagine that vase sitting on a shelf in their home.” Along with synchronizing its e-mail campaigns with the

Adding new buyers is critical to any catalog business. At a minimum, catalogers need to replace lost buyers due to attrition. A lack of prospecting to outside lists will cause a reduction in the size of the housefile and start a downward spiral that’s difficult to reverse. Prospecting has certainly become more difficult and more costly, but you can’t afford not to. This month, I’d like to share ways to increase the performance of outside lists. This will lower the cost of acquiring a new buyer. Most prospecting is done at an incremental loss. Accept that you can’t make money prospecting based solely on

Editor’s Note: This is the first article of a three-part series on becoming more proficient and adapting to the multichannel world. Parts two and three will appear in our June and September issues. Can you imagine a catalog/multichannel company not striving to become more efficient and effective in each selling channel in which it operates? Certainly not. This article focuses on the key issues and trends impacting multichannel selling today. It examines how you can improve your bottom line in each channel, cuts to the chase and identifies seven issues that smart direct sellers need to focus on this year. (You can also

Catalog Success: How did you break into the catalog business? Mike Stopka: It’s kind of a romantic story. Now we’re going back almost 20 years. Professionally I was a consultant and I traveled all over the United States in the 80’s, when I was in my 20’s and early 30’s — working in financial institutions, doing feasibility studies. Very strong on the spread-sheet skills. With that said, with all that travel I had free tickets, so we used to go to Europe every year. This is when the dollar was strong. It was like cheaper than going to vacation in Wisconsin for an Illinois

All Circuits are Busy

Approaching $8 billion in total sales and $559 million in profit for its most recent fiscal year, CDW’s roots are in cataloging in case you forgot. The Vernon Hills, Ill.-based provider of technology products and services for business, government and education was, and still is, a B-to-B cataloger, but a far cry from a mom-and-pop startup. For the past decade, CDW (which stands for the company’s original moniker, Computer Discount Warehouse) recognized growth opportunities within the tech industry and sought a multichannel approach to reaching its customers. Using vehicles such as television, radio, Internet, in-house magazine publications, webinars, seminars, sponsorship events and catalogs,

Increasingly, catalogers are moving into the multichannel model, and the numbers tell you why. A 2006 Direct Marketing Association survey showed that buyers who use two channels to purchase from a marketer spend 32 percent more on goods and buy 12 percent more frequently than those who purchase from a single channel. Furthermore, customers who purchase from three channels are 73 percent more likely to buy similar products from that merchant, strengthening brand loyalty across all channels while increasing the volume and frequency of sales. The key to expanding into a multichannel marketplace is how you handle the channels. The tendency is to

Many catalogers are missing important data that would allow them to make better use of both direct mail and e-mail to market effectively. Specifically, they don’t have the following: 1. E-mail addresses from many of their customers; consequently, they can’t use multichannel marketing to reach their best targets. They can certainly mail their catalogs, but they’re missing the one-two punch of using direct mail with e-mail. 2. Their e-mail lists often don’t contain name and address information. Therefore they don’t know the portions of their lists that are current or past customers. As a result, they can’t launch special campaigns to their best

In announcing its formal backing of the recently created American Catalog Mailers Association (ACMA) on Dec. 18, NEMOA board members are making a bold statement that the half-year-old organization can best represent their 110-plus catalog members’ interests, particularly in postal matters, going forward. Positioning itself as a catalogers-only group, ACMA is also focused on do-not-mail legislation and privacy. “ACMA will represent our specific needs relative to postal affairs, do-not-mail, privacy, environmental [policies] and whatever else comes our way over the coming year,” says Jon Fleischmann, president/CEO of the Potpourri Group and a NEMOA board member. Fleischmann believes potential benefits offered by the ACMA include

Looking to solidify its online channel to complement its 23-year-old catalog and new storefront, modern home furnishings marketer Chiasso targeted e-mail as the answer. “We’re [primarily] a catalog company, so we need to provide a great book to look through,” says Chiasso E-Commerce Manager Brian Mehler. “But you can’t just send a catalog and hope it does everything. You have to provide customers with different portals. So our e-mail and Web site are our portals.” The Chicago-based company wasn’t seeing the results it had hoped for, however. Open rates stood at 15 percent and the clickthrough rate was 5 percent. Conversion rates were

As with any endeavor, certain merchandisers seem to excel in the multichannel market. While they may operate in different spaces, those who are most successful share certain characteristics: 1. They recognize the uniqueness of each channel. Take these differences into consideration at every stage of planning and marketing. 2. They plan, plan and plan some more. Planning is critical, from the overall company business plan to individual plans for each channel to integrating channel plans so they make sense. 3. They review plans regularly. Conditions can change. A periodic review of plans against actual performance will ensure you’re aware of the implications of

How CDW Owns its Market

Jim Garlow, director of advertising and marketing operations for technology products and services provider CDW, shares his feelings on matters ranging from why it’s important to be a knowledge source in the tech market to growth tactics for startup catalogers and much more. Catalog Success: Why is it important for CDW to be viewed as a reference source in the tech marketplace? Jim Garlow: We send our account managers through rigorous training because our target audience consists of IT purchasers and chief information officers, both of which are very tech savvy. They know they want somebody on the phone who knows what they’re

CONSUMER Highlights for Children Magazine Subscribers Highlights for Children magazine provides kids between the ages of 2 and 12 “fun with a purpose.” The 871,000 12-month subscribers on this file have paid an average of $26 for a subscription. Ninety-eight percent of these subscribers come generated via direct-to-publisher. Self-reported child’s age and gender selects available. The base list price for the file is $95/M. ALC, (609) 580-2800, www.alcdata.com. Fashion & Accessories The more than 17 million individuals on this file are fashion-conscious men and women who strive to look good every day. They regularly purchase name-brand clothing and subscribe to

✂ Cut this out and tape it somewhere for easy reference. 1. Fear 2. Guilt 3. Flattery 4. Exclusivity 5. Greed 6. Anger 7. Salvation Reread the headline and deck of this article. They combine to use five of the Seven Copy Drivers (see the list above), which are a simple set of motivators. Ignore them at your own peril. If you write, edit or review copy for your catalog, tape this list to the wall next to your desk for easy reference. Refer to this list every time you work on your catalog’s copy. Now let’s take another look at the headline. What

Some Rebranding Ideas of a Different Sort

Ordinarily, I try not to get terribly personal in this space. What we do here — put out a B-to-B magazine, a weekly e-newsletter and an informational Web site, rather than a catalog, sales-oriented e-mail or e-commerce Web site — isn’t a whole lot like what you do. We do share a common bond, of course: the catalog/multichannel business is our daily focus. This month, however, I did find a common bond in our daily regimen and thought I’d share a recent rebranding experience we had. As always, I hope you’ll gain some ideas you can apply to your own business. Late

HOW DID YOU BREAK INTO THE CATALOG BUSINESS: Two words: world travel. Working as a business consultant and traveling all over the U.S. in the 1980s, Stopka earned plenty of frequent flyer miles to take annual vacations in Europe, where he fell in love with European culture. “I told my wife [Design Toscano co-owner Marilyn Stopka] I could market European exotic products to the American public,” Stopka says. By sourcing through a friend in the statuary business, Stopka began selling his products through a new catalog. “We took its catalog, replaced the cover, put a price sheet in and advertised in the back of

The infoUSA-Direct Media Deal: The Experts are Buzzing, What’s Your Take?

The news of infoUSA’s acquisition of Direct Media sent the combined reaction of total expectation and shock waves throughout the catalog/multichannel list industry. My own opinion is that this deal was to be expected considering the path that infoUSA has been going in recent years. Direct Media joins the infoUSA stable that contains Millard Group (including its most recent pick-up, Mokrynskidirect), Edith Roman, Rubin Response, Walter Karl, JAMI Marketing Services and American Church Lists. Then again, it’s a little surprising considering that Direct Media was sold to Acxiom nearly 12 years ago, only for Direct Media’s management team to buy the company back four

If you want to become a true multichannel marketing master, you should be on top of these three, in addition to the seven we outline in the main article. 8. Customer service and fulfillment are to the multichannel business model. At one point in direct marketing history, it was thought that fulfillment was important, but wouldn’t set one apart from competitors. During the pure-play Internet heyday of the ’90s, it was actually amusing to watch Web sellers struggle with fulfillment. Today, top business and consumer catalogers such as Quill, Lands’ End, Drs. Foster & Smith and Internet-only companies like Zappos.com, have raised

The U.S. Box Corp. catalog does a great job of showing potential customers that the company carries an impressive array of paper products to cover the packaging needs of everyone from boutique shops to catering companies to jewelry stores. However, the book has a number of flaws too, most notably a number of confusing product references that can leave customers scratching their heads. Front Cover Solid, Back Lacks The front cover shows both people and products; it’s engaging and fun. I’d recommend adding the Web address and toll-free phone number to the cover and spine of this perfect-bound, 176-page annual catalog, as well as

Having a hard time finalizing your 2008 contact strategy? You’re not alone. The mission hasn’t changed: You want to develop the most efficient way to convert prospects into first-time buyers and first-time buyers into repeat customers. But piece together the rapid pace of technological change, the volatile economy, the ongoing migration and evolution from phone to Web ordering, then add the likely distraction of the presidential election throughout the year, and it can make any marketer feel like throwing in the towel in bewilderment. Realistically, there are only three ways to proactively convert known prospects to buyers and one-time buyers to repeat buyers: