What Every Retailer Should Know About Influencer Marketing

For retailers that need to increase brand awareness on social media, the use of influencers is no longer just another option. It’s essential. Influencer marketing is projected to become a $5 billion to $10 billion market by 2020. That’s because when retailers and influencers team up, they create a more authentic connection with their target audience, and that generates more engagement and a higher return on investment for marketing campaigns.

Retailers are already on top of their game when it comes to social media, ranking among the top five industries with the most user engagement, according to our data. As you might expect, larger retailers dominate on social media, just as they do in sales. Walmart currently ranks No. 1 among retailers in terms of #ad hashtags (which denotes a sponsored ad), followed closely by Target and Sephora. 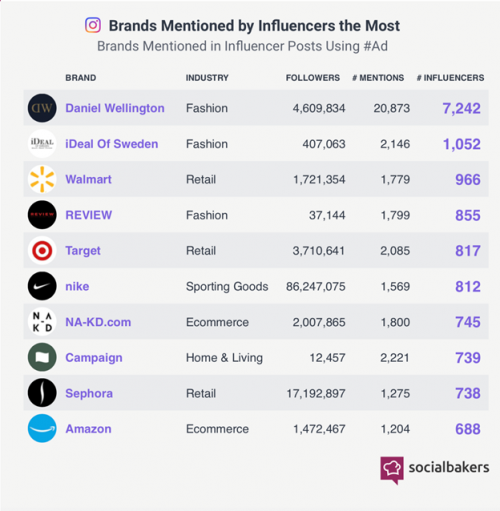 As this data shows, retailers are increasingly turning to influencer marketing to create customer loyalty, spark buzz and drive online sales. However, in order to reap the rewards of this collaboration, each retailer must seek out its own sweet spot among the universe of influencers.

Where Are Influencers Most Active?

Today, Instagram is the prime channel for influencer marketing. Despite having a smaller audience size than other channels such as Facebook, it has a far greater engagement rate.

As you might imagine, influencers vary greatly in terms of age, geography, interests and number of followers. From a brand perspective, it helps to break down influencers into three categories:

By far, the majority of influencers on Instagram today are micro influencers. They account for over 80 percent of influencers in Asia, Europe and Latin America, and over 75 percent in North America.

Why is Influencer Marketing So Effective?

One of the amazing aspects of influencer marketing is the trust and authenticity that influencers have developed with their audiences. New data shows this bond is so strong that influencers don't lose interactions with their followers when working with brands. In fact, sponsored and nonsponsored influencer content receive nearly the same engagement rate.

How Do You Recognize Fraud While Working With Influencers?

In this golden age of influencer marketing, there's also a good deal of fraud. Research we compiled earlier this year showed that brands can minimize the risk of working with fraudulent influencers by looking at two key data points: the influencer’s performance over an extended time period, and their engagement level per 1,000 fans. In addition, benchmarking the performance of a few influencers over time can help to identify anomalies that typically result from fraud.

Therefore, whether you're a retailer that needs a massive spike in brand awareness by working with a celebrity or macro influencer, or you're looking to connect with a highly specialized audience through a micro influencer, it’s likely there's a good match for you in the influencer space. And with the right data points you can better determine whether the influencer is authentic and a good fit for your brand.

Yuval Ben-Itzhak is the CEO of Socialbakers, an AI-powered social media and digital marketing solution.

Yuval Ben-Itzhak is the CEO of Socialbakers, an AI-powered social media and digital marketing solution.

Ben-Itzhak brings over 20 years of business and technology experience. He is a frequent commentator in the media, speaking on topics such as the future of mobile, security, privacy, consumer dynamics, and disruptive innovation. Prior to joining Socialbakers in 2017, he served as CTO at Outbrain, before Outbrain he was CTO at AVG Technologies for 5 years where he was instrumental in taking the company public in 2012. He was the CTO of Finjan, and in 2000 founded the web application security pioneer, Kavado.

How Retailers Can Build Brand Loyalty Via TikTok

How Retailers Can Win Over Gen Z