What Are the Technologies Retailers Will Be Increasing Spending on in 2018?

Did you know 51 percent of retailers will be increasing their spend on marketing automation technology in the next 12 months? Mobile, point-of-sale systems, live chat, online shopping carts — nearly every aspect of a retail business involves technology in some form or fashion. At times it can be overwhelming.

Over the next few weeks, Total Retail will be reporting on the findings of its most recent survey and report, The 2017 Retail Technology Report: An Analysis of Trends, Buying Behaviors and Future Opportunities, where respondents shared how their companies are handling the research, buying process and implementation of new technologies. This report serves as a valuable resource for retailers looking to learn more about the technology landscape within their industry, offering them the chance to benchmark themselves against their competition.

It makes sense that email, the channel often credited with providing the best return on investment of any of its digital marketing counterparts, is far and away the most popular technology used by retailers. Ninety-two percent of respondents currently using email in some form to communicate with their customers, nearly twice as much as the No. 2 technology on the list, mobile website, which 50 percent of respondents said they’re using. Some of the much-hyped newer technologies, including virtual reality (4.52 percent), chatbots (7.34 percent), and 3-D printing (10.73 percent) have clearly yet to see widespread adoption among retailers.

The following chart provides insight into retailers’ technology budget plans for 2018. There's no better indication of the technologies that retailers believe in than the ones they're willing to invest money into. This chart provides that data: 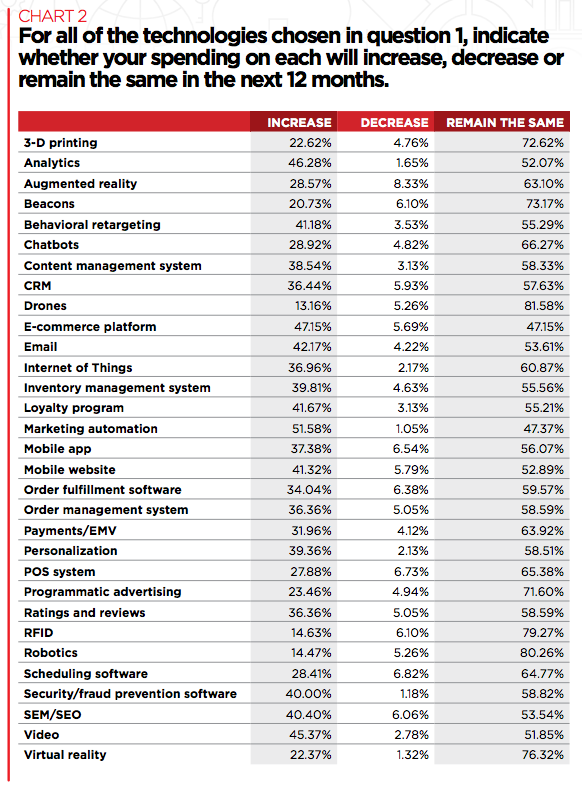 Conversely, the technologies that are most likely to have their budgets cut in the next 12 months include augmented reality (8.33 percent will be decreasing spending on the technology); scheduling software (6.82 percent); point-of-sale system (6.73 percent); mobile apps (6.54 percent); and order fulfillment software (6.38 percent).

We'll be continuing our reporting on this proprietary data in the coming weeks. You can access the full 2017 Retail Technology Report: An Analysis of Trends, Buying Behaviors and Future Opportunities, by downloading it here.

How Retailers Can Monetize Data