An Analysis of Retail Print Circulars for Back to School

As August approaches, the back-to-school (BTS) shopping season is on the minds of retailers everywhere. Recently, we covered Target’s college supply registry, which rolled out this year to capture some of the early BTS shopping dollars. However, according to our Shopper Insight Survey, 63 percent of BTS shoppers plan to do the majority of their shopping in August.

According to our survey, 75 percent of shoppers use circulars in planning their BTS shopping trip, but they're also heavily leveraging digital. About 40 percent checked out retailers’ websites and TV ads, and a third relied on email promotions. Clearly, they're using multiple inputs in their decision making. The graphic below illustrates the print circular strategies of Target and Wal-Mart from 2014 to 2015. We can see that Target maintained the same circular presence in 2015 as it did in 2014, while Wal-Mart scaled back from six BTS-themed circulars in 2014 to two in 2015. 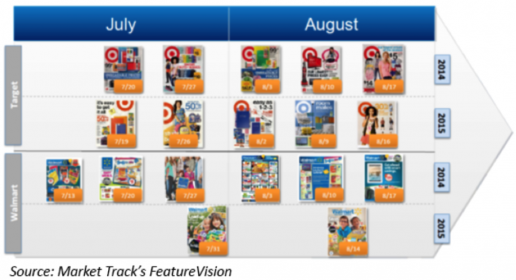 By reducing its total BTS circulars from six to two year-over-year, Wal-Mart also reduced the total number of promoted products. Target featured over six times as many apparel promotions, and about four times as many stationery promotions as Wal-Mart during July and August of 2015 in print.

Wal-Mart isn’t the only retailer scaling back on the number of print circulars during this BTS season. Macy’s also decreased its print circular count from seven to three during the last year’s BTS shopping season (July-August 2015). So how does this strategy align with consumer behaviors? According to survey data from Market Track’s 2015 Shopper Insight Series, 50 percent of shoppers reported using print circulars the most when deciding where to go for BTS shopping, which is more than any other promotional media type.

However, scaling back on print circulars does allow more room for digitally focused advertising, like email. The survey also shows us that over a third of shoppers use email promotions to find deals. Last year we saw a significant spike in email promotions in early August. Macy’s, in particular, led its top competitors with 19 email promotions in the first week of August 2015, and Wal-Mart sent at least one email every day during the same timeframe.

Regardless of the mechanisms that retailers are employing to reach their audiences, success in the critical BTS season is dependent on being able to capture the attention of not just parents, but also kids who have input on what's ultimately purchased. That means a multifaceted and well-orchestrated strategy across all media types is critical in winning in a crowded marketplace.

What Brands Must Keep in Mind This Holiday Season