This Mother’s Day, U.S. shoppers are expected to spend almost $23.6 billion, an increase of more than 10 percent over last year, making Mother’s Day the third largest retail event of the year (after the winter holidays and back to school).

Google stated that in 2015, more searches happened on mobile devices than on desktop, highlighting consumers’ preference to use their mobile devices to research products and services. Mother’s Day shopping is no exception, as one out of three U.S. consumers will do their shopping online, and many will rely on their phones at some point during the process. One out of three online shoppers say they'll use their phones to research gift ideas, and one out of five will use their devices to complete the purchase. Google also noted that there has been a 34-time increase in "near me" searches, with over 80 percent of these coming from mobile. Therefore, mobile is not only a key part of driving traffic to your digital properties, but also crucial to driving foot traffic in-store.

If you focus on these stats, it’s tempting to assume that, at least partly thanks to mobile, this will be a banner year for online retailers. However, there’s a catch: the bar for consumer expectations continues to rise. For example, a 100-millisecond delay in load time can decrease mobile conversion rates by up to 7 percent, and a two-second delay can increase bounce rates by 103 percent.

This data comes from Akamai’s new "State of Online Retail Performance" report, which analyzes the performance of retail sites from 10 billion online transactions.

The median conversion rate for mobile was 1.2 percent, but median numbers don’t tell the complete story. Sessions with median page load times of 2.7 seconds correlated with a 3.3 percent conversion rate. In other words, visits with faster page load times had conversion rates almost three-times greater than the median. It’s no surprise that consumers are impatient, as they've gotten used to use their mobile devices for so many daily tasks. Whether it’s asking a question to their virtual assistant, or ordering a coffee or a ride, it all needs to be fast and seamless.

These impacts were felt even more with pages that were one second and two seconds slower. Mobile pages that experienced a two-second delay — loading in 4.7 seconds instead of the optimal 2.7 seconds — had conversion rates that were 26 percent lower.

Mobile shoppers were most sensitive to page load delays, and this effect was strongly felt when it came to bounce rate. The median bounce rate for shoppers using mobile devices was almost 58 percent. Pages that loaded in 700 milliseconds experienced the lowest bounce rate (14.1 percent). Pages that loaded in 1.7 seconds experienced a median bounce rate of 21 percent — representing an increase of almost 50 percent. At 2.7 seconds, the bounce rate was almost 29 percent, representing a 103 percent increase. High bounce rates hurt your bottom line, and you lose that consumer and the opportunity to convert them. It’s good to keep in mind that consumers are only one back button click from your competitors in search results, and they're not willing to wait for the spinning wheel to show on your site. 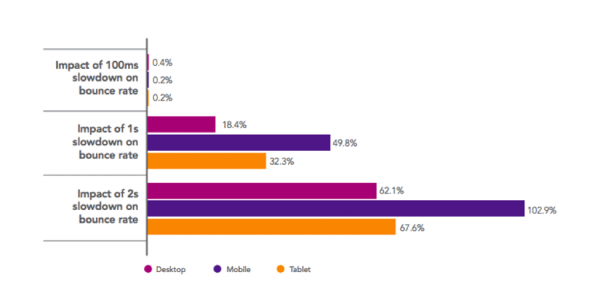 Session length (i.e., the number of pages visited in a single visit) is a strong indicator of user engagement and satisfaction. This makes sense: faster pages compel shoppers to spend more time on retail sites, visit more pages and add more items to their carts.

A Critical Time to Invest in Mobile Web Performance

Currently, almost half (47 percent) of all consumers browse retailers’ sites via their phones, yet only one in five complete transactions via mobile. This number will only to continue to grow, and if past behavior is an indicator, this growth will happen more quickly than retailers expect.

Some retailers have already experienced the mobile tipping point, with the majority of their sales coming from smartphones and tablets. For example, an online retailer of licensed team sports apparel found that 56 percent of its Thanksgiving Day sales happened on handheld devices — 42 percent via phones and 14 percent via tablets.

It’s no longer enough to just have a mobile site; retailers need to have a mobile-first mind-set and take advantage of technologies such as responsive web design, adaptive web design, image management and mobile payments solutions to provide a fast and seamless experience. Retailers that invest in mobile, email and social see 30 percent more sales, on average, and 25 percent higher average order values. If you’re not already investing in mobile, now is the time to start.

Jason Miller is chief strategist of commerce at Akamai. Reach him at jamiller@akamai.com.

4 Ways Retailers Can Get Ready for Back to School

What to Consider When Implementing Chat Commerce