How Retail Salaries Differ by Department

As part of our continuing coverage of Total Retail’s Salary Benchmark Report, we are taking a look at how retail professionals’ salaries change depending on what department they work in. As a reminder, the Salary Benchmark Report was produced after an online survey was sent to Total Retail’s audience over a two-week period in late June. The survey resulted in 660 responses, which the analysis contained in the report is based upon. 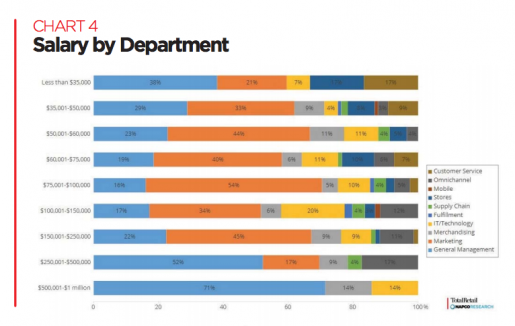 Respondents that consider their primary department to be “omnichannel” make more money than other retailers — 66 percent of retailers with an omnichannel title or role make more than $100,001 per year. The respondents that make the least are those whose primary department is stores. Seventy-nine percent of those in that group earn less than $75,000 annually. For more of these valuable insights into retail executives’ salaries, download Total Retail’s Salary Benchmark Report today! This comprehensive research report can help you maximize your earning potential, as well as enable employers to benchmark their compensation packages against the rest of the marketplace.

Total Retail’s Salary Benchmark Report. How do retail salaries differ between departments? Results from Total Retail’s Salary Benchmark Report show that omnichannel and general management positions make the most, while store positions make the least. Get insight into this, plus much more to help you maximize your earning potential, by downloading the full survey here.

Retailers Should Use Tech to Drive Impact in CSR

CVS Reshapes Itself as a Community Health Hub

Insights From Executives on Back-to-Office Plans