How Retail Salaries Are Affected by Location

As part of our continuing coverage of Total Retail’s Salary Benchmark Report, this week we're taking a look at how retail professionals’ salaries differ depending on what geographic location they work in. As a reminder, the Salary Benchmark Report was produced after an online survey was sent to Total Retail’s audience over a two-week period in late June. The survey resulted in 660 responses, which the analysis contained in the report is based upon. (Click on the chart to see an expanded view.) 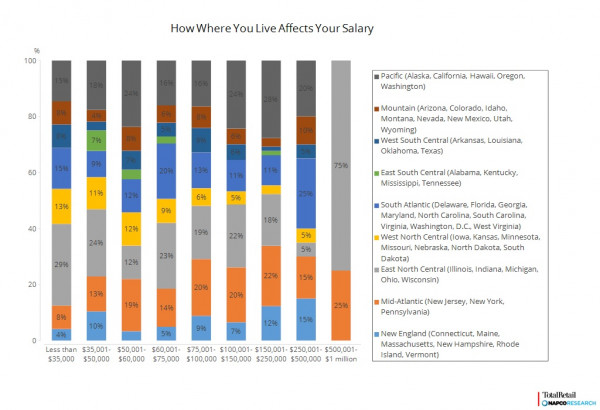 As expected, where you live affects the salary you receive. Typically, respondents working for a company headquartered in the East North Central region (Illinois, Indiana, Michigan, Ohio, Wisconsin) or the Mid-Atlantic Region (New Jersey, New York, Pennsylvania) earn more than those in other parts of the country. The lowest salaries in the industry are more commonly found at companies headquartered in the West North Central region of the country (Iowa, Kansas, Minnesota, Missouri, Nebraska, North Dakota, South Dakota).

Take a look at the most common salary bracket for employees in each region: