In this interview with Total Retail, Russ Kahn, senior vice president of PUMA North America retail, talked about the integration of technology into the flagship store, the company's future plans, and the decision-making process for opening the brand's first-ever North American flagship location. 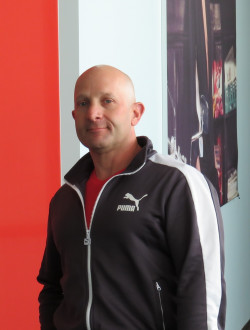 Total Retail: Can you tell me about the decision for PUMA to open its first-ever North American flagship store in New York City?
Russ Kahn: PUMA continues to see growth within the North American market, and we believe investing in the New York City flagship store will help us in our pursuit to be the fastest sports brand in the world. PUMA is committed to pushing the boundaries of sports, fashion and technology, and this store is the latest manifestation of that commitment. PUMA has shown a commitment to New York culture in varied ways throughout the brand’s history. PUMA made sports and pop culture history for creating the first shoe named after a basketball player — named in honor of New York Knicks player, Walt "Clyde" Frazier — when it launched in 1973. This store opening is a new chapter in PUMA’s ongoing relationship with the city. It only makes sense that our first-ever North American flagship would be here in New York City, and we’re incredibly excited to open our doors and connect with the community — locals and visitors alike.

TR: What type of technology did PUMA incorporate into the store?
RK: The store features numerous technology integrations, including a first of its kind F1 racing experience, where consumers can hop into an authentic Mercedes or Red Bull F1 race car to compete in a race through the streets of Manhattan. There's also an interactive virtual engagement room, The Skill Cube, where consumers can interact with PUMA brand ambassadors in a simulated soccer stadium or training gym to test our soccer cleats or training footwear. After scanning a QR code on select products or at the basketball entry zone, consumers will be met with an exclusive augmented reality experience featuring the PUMA mascot. Consumers can kick back and enjoy the stadium seating and large screen NBA2K gaming experience in the basketball zone, with a future exclusive game under development.

A state-of-the-art RFID inventory management system is used in-store, which is inclusive of product tracking and security tagging for the store. The store can conduct a full physical inventory in less than an hour, know exactly what's on the floor vs. the stockroom, automatically receive product into inventory, and know if a display is missing. iMirror by NOBAL are installed in the fitting room seating areas on both floors as well as each sales floor. These cutting-edge mirrors allow RFID product to bring up alternative selections or colors based on the item the consumer is trying on. In addition, consumers can press a button to notify all associates they need help at the magic mirror.

TR: Can you tell me a little bit more about the customization studio?
RK: PUMA has partnered with renowned New York-based artists and designers to bring its exclusive PUMA x YOU customization studio to the store. Consumers can customize and personalize PUMA footwear, apparel and accessories using paints, dips, dyes, patchwork, embroidery, 3D knitting, laser printing, pinning, material upcycling, and many other creative mediums. Earlier this month, with the kings of customization, Chinatown Market, store patrons were able to customize their PUMA apparel, footwear and accessories using Chinatown Market’s state-of-the-art printing technology. Coined “Chinatown Market University by PUMA,” the customization offering will kick off at the New York Flagship Store and pop up in various forms through the 2020 Tokyo Olympics. New PUMA x YOU artist residencies begin every two weeks, including collaboration partners like Sue Tsai, BWOOD, Maria Jahnkoy, Même, and Pintrill, with additional artists announced later this year.

TR: How will the flagship store be integrated with PUMA's digital properties (e.g., direct-to-consumer website, mobile app)?
RK: All products in the flagship store are embedded with QR codes that link all products directly to puma.com. The store also has shopping kiosks on each level that allow consumers to shop PUMA’s full assortment online, should the item be unavailable in-store, and receive free expedited shipping on the purchase.

TR: The flagship store has exclusive New York City-inspired products only available at this location. Why was that important for PUMA to include?
RK: There are 66 million domestic and international tourists visiting New York City every year. We want to give consumers an opportunity to bring a little piece of New York and PUMA home with them, and create an emotional connection between the consumer and the brand.

TR: Does PUMA have plans to open any other flagship stores?
RK: At this point, we're going to continue perfecting this New York experience and ensure we're delivering on our promise to the 5th Ave. consumer to be the “Fastest Sports Brand in the World.” Once we feel this store is achieving our end goal, we will look toward other key cities in the U.S. and Canada to possibly expand our flagship presence in the future.

Staying on Top With the Always-On Store

How to Scale Innovation Needs Through Software

How Retailers Are Carving Out a Contactless Path