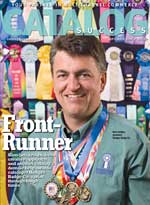 Catalog Success: Where’s the company headquartered? Scott Drayer: Fleetwood, Pennsylvania, which is about midway between Allentown and Reading. And about an hour-and-a-half north of Philadelphia. CS: What’s your customer demographics? SD: It’s male professionals. It’s going to be a little bit older; we look at probably about 35 to 60 [years of age], focusing on dress shirts and ties. Like I said, it’s more of a professional male, higher income and family-oriented, although there’s a good possibility that he’s an empty nester at this point. CS: What’s the primary merchandise offered in the catalog? SD: Men’s business dress. Our roots have

The old Banana Republic catalogs from the 1980s used to feature several vignettes about the adventures of co-founders Mel and Patricia Ziegler, where they talked about how they found this neat, safari-esque stuff on recent journeys. These were classics. They’re bound for some yet-to-be-founded catalog Hall of Fame. Personally, I looked forward to getting those catalogs and always spent at least an hour with each. Around that same time, PaperDirect also was mailing catalogs. They had vignettes in them, too, but they were from PaperDirect product users — people who were employing the products you were looking at in the catalog. If your vignette

Catalog Doctor: The Doctor Is In to Help You ...

PATIENT: Doc, I’m a longtime catalog marketing pro running a multichannel business. But between the down economy and the expanding Web, I’m depressed and confused about how to get my business back on track. With all of today’s changes, are there any prescriptions you can give me? CATALOG DOCTOR: You’re suffering from a recent affliction called Lost-Boom Syndrome, or LBS. It’s been sweeping multichannel businesses since this economic malaise set in, creating anxiety and despair. LBS exhibits multiple symptoms, requiring a multiple therapy approach. Let’s look at each symptom and its therapy. Symptom 1: Sloppy Marketing The most recent economic boom allowed

Copywriting is often treated like “copy on the go.” That is, it’s treated more like picking up fast food than relaxing over a well-balanced meal. But when you drag copy to a Web site from the original catalog, or use it almost verbatim in an e-mail, there’s bound to be something missing — including lost sales. Consider writing to “fit” the media. The very aspects that make each different selling channel so vital provide clues for writing more powerful copy. The Similarities Regardless of the media, the name of the game is selling. Keep your voice consistent for all media, and remember the

In 88 years in business, Hodges Badge Co. has never had an unprofitable year. But in this rocky year, a potentially negative bottom line was too real a possibility for it to rest on its laurels. Like so many catalog/multichannel merchants, Hodges sought to defray costs to ensure that its 89th year would also be profitable. So Rick Hodges, president of this family-owned, Portsmouth, R.I.-based B-to-B cataloger of ribbons, rosettes, medals, presentation silver, sashes and buttons, targeted his biggest cost center — postage rates — as the focal point for potential savings. His goal was to cut costs without reducing the circulation of

Keep Up With Dramatic Changes

Editor’s Note: This is the third of a three-part series on becoming more adept and adapting to the multichannel world. Parts one and two appeared in our February and June issues. Smart multichannel merchants let customers decide how to order. You can visit a J.Crew store and order a pair of jeans via its in-store Web kiosk while talking to a service rep on the phone. What generated the order? In this case, it was a mailed catalog. Which channel gets the credit? That gets a bit complicated. Our first installment of this multichannel mastery article series detailed the key issues you should focus

Profile of Success: Tailor-Made for Growth

What Got Him Here: Direct marketing education in college. Noting that it’s an uncommon trait in the direct marketing business, Scott Drayer prepped for his future career as a student at Penn State University. “I took some direct marketing classes in college,” he says, “which I guess is kind of a rarity.” Upon his graduation, Drayer saw his first opportunity at Paul Fredrick. “I applied for, and was hired as, a circulation assistant,” he says. In his eight-plus years at Paul Fredrick, Drayer has been promoted several times, including to his current position as director of marketing in February 2006. What’s Made Him

Attention catalogers who have changed the shape of your books or are considering doing so within the next year: Beware! Changing your catalog shape to qualify for automation letter postage rates may save money in the short term, but it can cost more in the long term. That’s because the U.S. Postal Service is in the process of conducting tests on a variety of design characteristics. Within the next year, its rules will change significantly and may wipe out the slim-jim savings. And it’s not just about the shape. The USPS also is looking into changing rules concerning mailing materials, thickness, tabbing requirements and

Matchbacks are a way of life for catalogers today. This process of having your order file “matched back” against your recent mail tapes to give credit to the proper source or key code on a list-by-list, segment-by-segment basis has become fairly routine. They’re the only way to tell where customers are coming from and which source key codes should be given credit for the sale. Without matchbacks, it’s not uncommon to trace only 30 percent to 40 percent of your orders to a specific key code. But the matchback process is hardly a perfect science. There are issues with date ranges, the logic

As the editor-in-chief of a publication that follows a rather small business niche, I often get an inferiority complex when reading mainstream publications such as The New York Times, The Wall Street Journal or BusinessWeek. By in large, if your company isn’t public and/or doesn’t take in more than a billion dollars a year, you rarely show up on their radar screens. Take the article I read in the July 23 issue of The New York Times that talked about a new direct mail green movement. The headline was “Direct Mail Tries to Go Green. No, Really.” I figured, surely there’d be references to

Valuations & Acquisitions: Sharks Are Circling, Blood’s in the Water

On the face of it, there’s never been a better opportunity for buyers of multichannel merchants. The blood’s in the water. While this past summer’s multiples have held steady for most marketers with sales of less than $75 million, the multiples have come down for the best-run companies, according to Stuart Rose, managing director of Wellesley, Mass.-based investment banking firm Tully & Holland. The fact that multiples have shrunk to eight times earnings, down from 10 times earnings, only bolsters the case for buyers. But the sharks aren’t biting — at least not yet. As with the real estate market, prices for dream houses