It's Not About the Title: Report Finds VPs Get Best Compensation Packages in Retail, Not CEOs

Last month, Total Retail released its 2018 Salary Benchmark Report, offering retailers and employees insight into the compensation packages of today's retail executives. The report was based on a survey sent to Total Retail's audience, which yielded some interesting insights about the salaries of retail executives, including that a higher title doesn't always equate a higher salary. Consider the chart below, which breaks down survey respondents’ salaries based on their title. 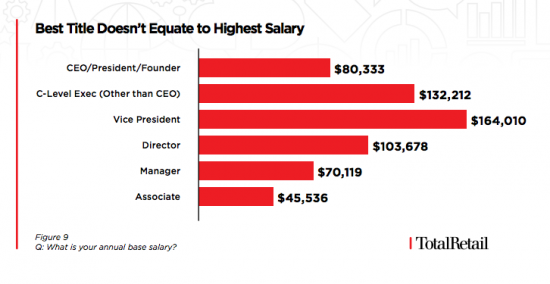 According to the chart above, respondents to our survey with the highest annual salaries were vice presidents, bringing home an average of $164,010. C-level executives (other than CEOs) were next, making an average yearly salary of $132,212. CEOs/presidents/founders receive, on average, an annual salary of $80,333 each year. Perhaps the lower position for those at the top of organizations (i.e., CEOs/Presidents/Founders) can be attributed to the number of small business owners that took our survey, and thus their salary is commensurate with the size of their companies.

C-suite execs other than CEOs fared best when evaluating respondents’ bonus money. According to this chart, C-level executives (other than CEOs) received the highest annual non-base salary compensation last year, with an average of $132,547. One would expect that as retail industry sales rise — the National Retail Federation forecast 2018 sales will increase 3.8 percent to 4.4 percent year-over-year — the bonuses of retail leaders will also see an uptick based on their company’s performance. 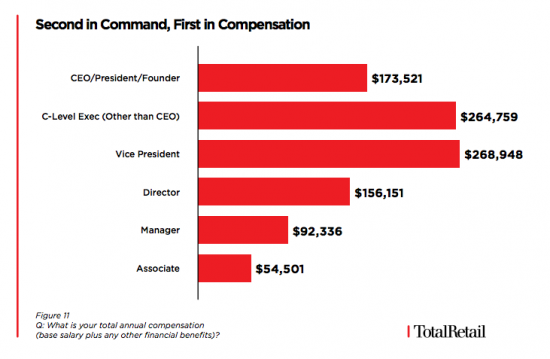 While vice presidents may be second in command at their respective companies, when evaluated on an aggregate basis, they ranked first in compensation in our 2018 Salary Benchmark Report. Survey respondents with a vice president title received the highest annual compensation (base salary plus financial benefits), with an average take-home pay of $268,948. C-level executives (other than CEOs) were a close second, making just $4,189 less than vice presidents. Surprisingly, CEOs were a distant third ($173,521).

It's never just about the title. Salary is still the driving factor for most executives in the retail industry, however, more and more executives want flexibility when it comes to their compensation packages. Creating an incentive-laden contract that rewards executives for better company performance (based upon on pre-determined metrics) can be financially beneficial to both the company and the employee. In addition to offering flexibility within salary structure, The Harvard Business Review reports that offering an agile work environment helps as well.