Starbucks is making news … again. Yesterday, the coffee Goliath announced it will join the growing wave of companies using artificial intelligence (AI) and chatbots to supplement employees, planning to unveil what it calls an “innovative conversational ordering system.” GeekWire reports that the ordering system will be available via the Starbucks app and titled “My Starbucks Barista.” The news was announced by soon-to-be former CEO Howard Shultz and his successor Kevin Johnson at the company's annual investor conference. In a demo video, a customer is shown placing a difficult order and the chatbot understands and delivers with ease. Below is a photo of how customers will be able to order through the mobile app chatbot.

Total Retail's Take: This is yet another example of how Starbucks is moving in a mobile-first direction. Since launching in September 2015, Starbucks’ app has helped grow sales tremendously and only increased customer loyalty with holiday-themed "Starbucks for Life" loyalty programs, an order ahead feature and more. Starbucks reports that it has over 8 million customers using the mobile pay feature, and is now just one of many companies using chatbots to enhance the customer experience. Facebook, Target and Disney have all announced and tested the use of chatbots for customer service and mobile experiences. 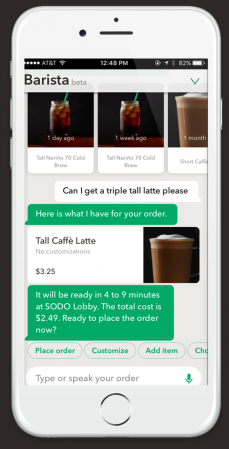 Why Experience is Key to Brand Loyalty

3 Ways to Gain a Competitive Edge With AI

The Top Customer Service Frustrations in 2022