Email teams can feel like they’re engaged in a constant trial-and-error process. It makes them reaction-based units rather than predictive.

They send an email to customers, analyze its performance, rinse, and repeat, using the results to help them get better at sending the right content in the future. There are a few problems with this approach, which contributes to futility in the process.

First, it’s often hard to gauge the actual value of a piece of content. For example, how can marketing teams tell why customers spent more after seeing an email? Does it have some quality independent of the customer? Does it increase customer spending because it was sent to your best customers?

Conversely, how do you isolate the performance of a creative asset that decreases customer spending? It could be that it was sent to the wrong audience, but it’s hard to separate your creative asset’s effect from the subscriber’s response.

The natural conclusion is that content that doesn’t perform well when sent to the entire audience isn't necessarily “bad” content. It could be that you aren’t putting it in front of the right person.

Another issue is that since many brands send the same content to everyone, they neglect the dynamic changes in subscribers’ tastes. It's more likely that subscribers will have different reactions depending on the creative asset received.

A good example is children’s clothing. If the marketing team sent an email campaign to everyone on their list highlighting the children’s section of their catalog, it would likely have below-average performance. For most customers, it would either negatively or not significantly affect their spending.

But if the same content was sent exclusively to customers predicted to spend more when they see this content, this “below-average content” would become a high-value asset because it meets their needs and interests.

This is because some “poorly performing” content has the potential to be high-performing niche content. Still, this distinction is blurred because it's not exclusively sent to the audience for which it’s intended.

Here’s a great way to fix the problems that come from not understanding a creative’s value.

The graph below illustrates the predicted effectiveness of a single creative to increase the amount that different customer segments will spend after seeing it (the average performance is 1.0). 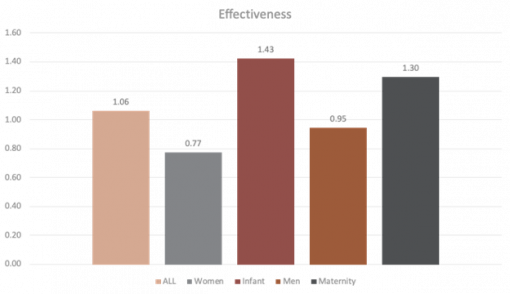 We look at effectiveness as an indicator of how this creative performs relative to an average creative from increasing customer spend.

In this example, the creative asset is predicted to significantly increase average spending among shoppers who have historically bought in the infant and maternity segments.

The same creative can perform differently across different groups. In this case, one email is predicted to have almost double the value when sent to one customer group over another.

By knowing how each creative asset will perform, email marketing teams can make educated decisions on the ideal content to send to a given audience at a specific time. This knowledge helps email teams stay ahead of the customer and predict the ideal content for each customer, rather than just react to customer behavior after the customer’s tastes have already changed.

James Glover is the co-founder and CEO of Coherent Path, an email marketing optimization and email personalization solutions provider.

Related story: Experiential or Promotional: How Most Brands Use Email Marketing Incorrectly

James Glover is the co-founder and CEO of Coherent Path, an email marketing optimization and email personalization solutions provider.

Reviewing the Impact of iOS 15 on Email Marketing

Amazon's New Tailored Audiences: Is it Worth it?

The E-Commerce Slowdown and How Brands Can Adapt