Outrunning the Performance Bear: What Retailers Need to Know

When it comes to website speed, the average IR 500 mobile Google Lighthouse scores show that there's a clear opportunity to get ahead of the pack of leading multibillion-dollar retailers

Fast e-commerce websites benefit the bottom line in three ways. First, faster websites tend to have higher conversion rates and lower bounce rates, which increases revenue. As a classic example, Amazon.com calculated that it would lose $1.6 billion in sales each year if it added just one second to page loads. Second, Google Ads gives fast landing pages a higher quality score, which means you’ll pay less per click (leading to more efficient marketing spend). Third, Google has made website speed a ranking factor in its 2019 “Speed Update,” and will soon reinforce this in its upcoming “Page Experience” algorithm update. The latter update is scheduled to go live in early 2021, and will lower the search ranking of pages that are slow to load and become interactive. Given the zero-sum world of search engine optimization, this means a faster website isn’t just growing your traffic; it’s stealing it from your competitors on the search results page.

This is the grizzly bear proverb in action.

How Did You Measure Speed?

At Moovweb, we analyzed the mobile Google Lighthouse 6.0 scores for the homepages of the leading 500 U.S. internet retailers by revenue, aka the IR 500. In the recently released version, a page’s performance score is calculated on the basis of a weighted sum of percentiles that takes into account the following speed measurements: First Contentful Paint, Speed Index, Last Contentful Paint, Total Blocking Time, Time to Interactive, and Cumulative Layout Shifts.

We ran Lighthouse using PageSpeed Insights to reduce the device-specific variability because it runs the speed test on Google’s servers directly. When comparing your website against the data here, you should run Lighthouse using PageSpeed Insights, as we did, rather than from within Chrome. The chart below shows the median, average, and 95th percentile mark for Lighthouse 6.0 scores. These should serve as useful benchmarks when comparing your own website's performance against your peers'. 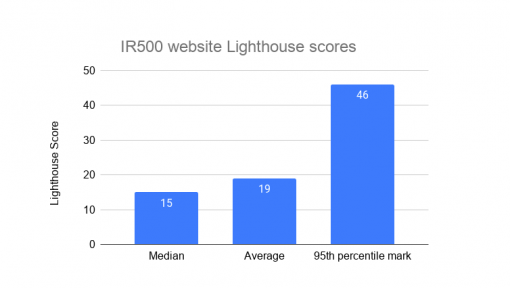 The big punchline is that the average overall mobile performance score is a surprisingly low 19, with a standard deviation of about 13 points. More than half of the websites for the top 500 U.S. retailers by revenue scored a 15 or worse on Lighthouse. And these poor scores aren’t new: The average score for the IR 500 websites was 26, with a median of 22 on the previous version of Lighthouse. In other words, performance scores were low on Lighthouse 5.7 too, and they just got worse when version 6.0 went live at the end of May.

To better visualize the distribution of IR 500 Lighthouse 6.0 scores, we’ve plotted the distribution of scores as a histogram below. The horizontal axis divides the performance score into “buckets” five points wide (i.e., scores from zero to five is one bucket, scores from five to 10 is another bucket, and so on). Then, the vertical axis shows how many websites scored in the range of each bucket. Most websites sit in the left half of the chart clustered near the average of 19. 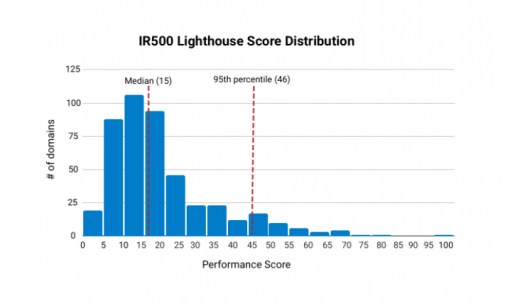 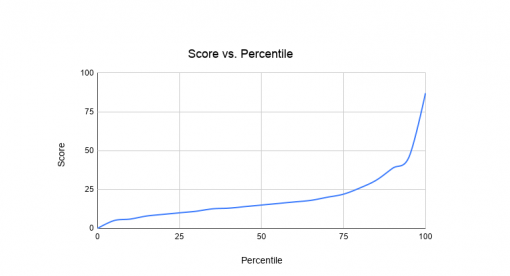 The vertical axis is the performance score, and the horizontal axis is the percent of websites that scored at or below that particular performance score. To use this chart, take your performance score from PSI, mark it on the vertical axis, and then find the value on the horizontal axis that corresponds to your score. This process will tell you the percentage of IR 500 websites that score at or below the same value. For example, suppose you analyzed your website performance using PSI and scored 26. As shown in the diagram below, this score would correspond to about the 80th percentile. Your page scores better than roughly 80 percent of the homepages in the IR 500. 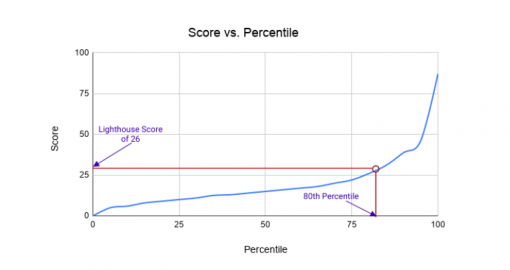 Keep in mind, however, that you should also compare your website on the underlying perceptual metrics like FCP, LCP, etc., listed above. This is because the Lighthouse performance score is somewhat arbitrary (subject to the criteria that the Google team decides) and hard to correlate to a real-world experience. For example, it’s hard to translate what a performance score of 50 would mean for your user experience compared with a performance score of 60. On the other hand, we know directly that a FCP of two seconds means users will be shown some (albeit not necessarily useful) content one second slower than a page with a FCP of one second.

Where Are Your Peers?

For our next step, we examined retail category performance. We broke up the IR 500 into 10 main retail categories, including automotive, consumer electronics, and health and beauty. Eight of the 10 categories outperformed the average IR 500 website, and two categories showed lower average Lighthouse scores.

You can see the best- and worst-performing websites by category in the table below: 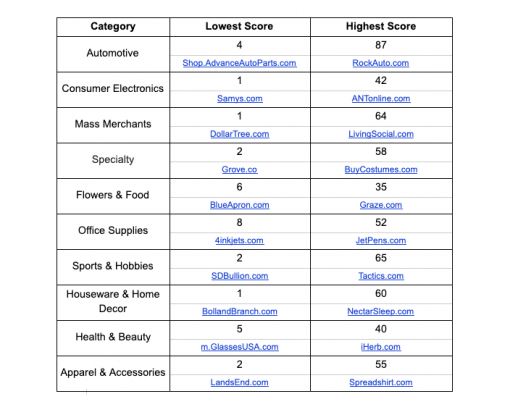 Automotive retailers like U.S. Auto Parts and O'Reilly Auto Parts had the highest performance scores out of all categories, with an average Lighthouse score that was a whopping 50.01 percent higher than the IR 500 average. RockAuto led the pack with a score of 87, while Advanced Auto Parts scored the lowest in the category.

Consumer electronics retailers came in second with an average score that was 17.17 percent higher than the average IR 500 website. Mass merchants and specialty retailers were a close third and fourth. Mass merchants outperformed the IR 500 average by 13.47 percent, and specialty retailers, including Purchasing Power and JM Bullion, were 12.91 percent faster than the IR 500 average.

Floral and food retailers saw an average performance score that was 10.37 percent higher than the average IR 500 performance score. Some surprising examples of the high distribution of scores within this category were Blue Apron (with a low score of six) and 1-800-Flowers.com (in the 97th percentile with a score of 53).

Office supplies retailers, including Staples and Office Depot, ranked sixth with an average performance score 7.85 percent higher than the average IR 500 retailer. Sports and hobbies retailers ranked seventh with an average performance score that was 6.09 percent higher than the average IR 500 website. Noteworthy retailers in this category are Tactics, which led the pack with a score of 65; GameStop, which scored a surprisingly low 12; and Fender, which scored a very low eight.

Houseware and home decor retailers are the last category to outperform the IR 500 average. These retailers scored 3.6 percent higher than the average IR 500 website. Grainger topped the category with a high mobile Lighthouse performance score of 60, while Dyson scored a low two.

Health and beauty websites ranked ninth with a performance score that was 10.62 percent lower than average. It’s worth noting that Walgreens scored a 13 and GlassesUSA.com scored a two.

Apparel and accessories came in last with an average performance score that was 21 percent lower than the IR 500 average. Lands’ End and Chico’s had a surprisingly low score of three, Gap and Nike came in at 14, REVOLVE scored 34, and Shoe Carnival scored 39, which was more than double the average IR 500 performance score. It makes sense that these retailers will come in last on Lighthouse 6.0 because they tend to be image-rich websites (and FCP and LCP alone determine 40 percent of a website's score).

What’s Slowing Down the Pack?

Improvements to website speed have historically centered on optimizing first-page load times, but that's not enough to convince Google or your customers that you provide a fast experience.

The IR 500 data illustrates that improvements to your website speed can unlock an incredible amount of potential. You could easily leapfrog your way to the lead. If giant market incumbents like Gap and Nike are setting the bar so low, what will happen to the brands that start to raise it?

Whether you already have an established online retail presence or you’re looking to break into a new market, you’ll never move fast enough to outrun a grizzly — but you can definitely outrun the other guy.

Ishan Anand is the co-founder and chief technology officer of Moovweb, a website infrastructure platform that enables sub-second websites.

Related story: How Online Retailers Get Moving With Lazy-Loading Images

Ishan Anand is the co-founder and CTO of Moovweb, a website infrastructure platform that enables sub-second websites. Ishan has been launching mobile products since the iPhone was released.

7 Sins for Retailers to Avoid This Holiday Season