Most retailers consider Black Friday weekend to be one of the largest events of the holiday season. In the mix of all the deals for early-bird sales and cyber week extravaganzas, sometimes Giving Tuesday (along with the holiday spirit) gets lost in the shopping frenzy. However, 2017 proved to be the year Giving Tuesday went from a global day of giving to a global movement. The San Diego Foundation reports the sixth annual #GivingTuesday broke online charitable donation records, totaling $274 million in donations from more than 150 countries worldwide. That’s a 54 percent increase from 2016 and a 134 percent increase from 2015. One retailer in particular gave back in a unique way. 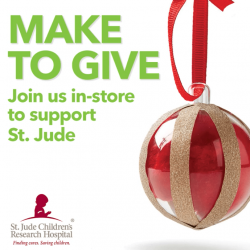 Craft supplies chain JOANN partnered with Saint Jude Children's Hospital this past Giving Tuesday to help bring some holiday cheer with its Make to Give campaign. At every JOANN store across the nation, shoppers made holiday ornaments with free supplies, which they kept or gifted to loved ones. For every ornament made, JOANN donated $1 to its newest charitable partner, St. Jude. The Make to Give campaign also had a digital component to it, as people shared photos of their handmade ornaments along with special messages to the children of St. Jude on social channels using the hashtag #maketogive.

"JOANN has always been committed to giving back to causes that fit our core values, not only on Giving Tuesday but year-round," says Amanda Hayes, corporate communications manager at JOANN. "St. Jude has had an incredible impact on children and families across the nation, and the mission of fighting childhood cancer and other life-threatening diseases is one we're proud to stand alongside."

In addition to promoting its #maketogive hashtag on Twitter, JOANN partnered with Pinterest to bring trending craft designs to the retailer's store locations to encourage customers to participate in the campaign. 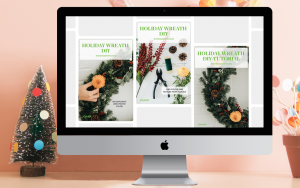 “We know JOANN customers love making things with their hands that bring joy to other people, so we wanted to tap into that this holiday season to help the children of St. Jude," notes Steve Miller, vice president marketing and business development for JOANN. "We’re thrilled to launch the ‘Make to Give’ program and invite our customers to create handmade gifts that are not only Pinterest-trending, but also a charitable act."

JOANN is planning on measuring sales online and in-store to determine the Make to Give campaign’s impact on its bottom line. But the real impact won’t be seen (or felt) until after the conclusion of the campaign when JOANN donates up to $50,000 from the ornament event to support St. Jude's mission.

What Retailers Can Learn From Taco Bell's DEI Plan