Rakesh Tondon is the co-founder and CEO of Le Tote, a women's apparel and accessories subscription service. He's also a retail industry game changer. Here's our interview with Rakesh, which appeared in the summer issue of Total Retail. (Here are interviews with our other game changers: Meaghan Rose, Rocksbox; Luke Sherwin, Casper; Chris Lindland, Betabrand; and Kate Doerksen, DITTO.)

Total Retail: Where did you get the inspiration to launch your company?
Rakesh Tondon: My wife, when she was going through her second pregnancy. She was struggling with variety, and the only variety of clothing she had was when she was swapping items with her other friends who were also pregnant.

Women are doing this in a very hyperlocal way to get variety. My co-founder, Brett, his girlfriend at that point was in a swap group. They would get together once a month, drink wine, swap clothes and track it all in Google Docs. That’s really when we looked at the universe of companies trying to solve that problem, which essentially led us to this path of how we could do that.

Sharing clothing isn’t a new behavior for women; it’s something they’re already doing. We wanted to launch as a maternity company in order to do this, but the bigger opportunity — or the bigger problem — is for women in the mainstream world with a closet full of clothes and nothing to wear every day. That’s why we launched with a product, what we call a classic product, and then launched maternity five months ago. 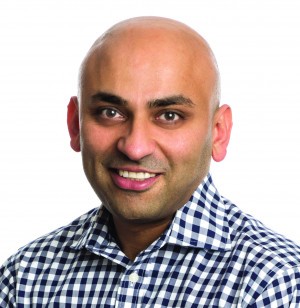 TR: How did you develop the resources and guts to start your own company?
RT: Every entrepreneur has to have some level of conviction and a bit of naivety to do what they do.

We were smart enough to figure some things out early on, but we were naïve enough to get started. We knew we would need help along the way to scale this business out.

TR: What was the pivotal marketing campaign or channel that really catapulted the business in its early days?
RT: When we launched it was a gated experience for people. The only way to get into the service was through an invitation. Invitees could invite their friends, and the more invites you sent out, the higher up the totem pole you got into the service. That was huge. We had a waiting list of about 20,000 women — women who wanted access to the service. That’s what really led us to getting access to customers in the early days. Referral marketing is really what led us to getting customers for the first year and a half.

TR: How about now?
RT: Referrals still continue to be a big driver of traffic. A little over 20 percent of our customers come from referrals. We’re also focusing on working with influencers; that’s been pretty successful for us in the past. And Facebook, for companies like us in the consumer space, works out really well.

We haven’t spent as much time in the offline world as we would like, but we try to connect with our customers when we can. We hold parties for members and ask them for feedback and what they would like us to do in the future. We’ve also done mailers, which work fairly well. But for subscription, it’s harder to acquire new people.

In the online world we continue to work with influencers — anyone that may be influential in a particular market. We want to empower them to help create awareness for Le Tote and then potentially sign on in a more formal way to work with us.

TR: Can you talk about your hiring strategy?
RT: That’s something that’s extremely important to us — and in every single startup. We start out typically knowing that the people that walk through the door will be smart. So the biggest check we have on our end is knowing not only can they do this job, but also making sure they fit with the company culture. That’s extremely important to us — knowing that they’re excited about our business, that they’ll fit really well and can collaborate with other teams.

A lot of companies want to optimize for the smartest people. That’s obviously something we do, but we take it a step further and ask, “Can we go out to drinks with them or have sushi with them? Will these people help take us to the next level, not only because they’re smart, but also because they have the right attitude to get things done?”

Two of our core values are “get shit done” and “do more with less.” We ask ourselves, “Are these the people that will get shit done and will they be resourceful enough in the best possible way using the least amount of resources? And are these people going to be able to get along with other employees?”

We also rely a lot on the really smart managers we have on our team. The right way to scale is to bring on subject matter experts. Early on we thought about where we were experts and then where we could fill in the gaps.

TR: What advice would you give to those thinking about launching their own retail business?
RT: Do something you really believe in. Things get really hard, and if you’re not passionate about what you’re working on, you’re going to lose motivation. Also, build something that people really want and are willing to pay for.

TR: What can traditional brick-and-mortar retailers learn from your company?
RT: Having technology as part of the growth strategy is something that they should be focused on. Just having a .com doesn’t make it a technology company. They really have to rethink the way they’re doing certain things and how technology is impacting their businesses. The world has changed, and there a lot more tools to learn customer preferences better by using more relevant data points. Saying who that customer is, do I know her, can we be a bigger part of her life and can we meet her needs when she expects us to.