Amazon.com sellers owing an estimated $2 billion in uncollected sales taxes are being offered a chance to waive those charges. CNBC reports 13 states have come together to announce a new sales tax amnesty program for online merchants who sell on Amazon and other online sites. Starting August 17, sellers with potential tax liability can sign up with the Multistate Tax Commission (MTC), enabling them to become compliant and pay taxes on only future sales. The 13 states include Alabama, Arkansas, Colorado, Connecticut, Kansas, Kentucky, Louisiana, Nebraska, New Jersey, Oklahoma, Texas, Utah and Vermont. It's rumored eight more states are considering participation.

Total Retail's Take: Currently, online merchants aren't required to collect sales taxes if they don't have a physical presence in the state. However, it gets complicated when Amazon marketplace sellers participate in the retailer's Fulfillment by Amazon (FBA) program. Sellers pay a fee to use Amazon warehouses and its massive logistics operation. So when inventory is shipped to particular states in which Amazon has a physical presence (warehouse, brick-and-mortar store), the sales tax requirement is triggered.

“This is just one part of an emerging trend," says Scott Peterson, vice president of U.S. tax policy and government relations for Avalara, an automated tax software provider. "You can expect to see states across the country roll out their enforcement mechanisms to promote compliance and get the money they're owed. They've done it before, and they'll do it again. Businesses need to know all their options when they're figuring out their compliance obligations.” 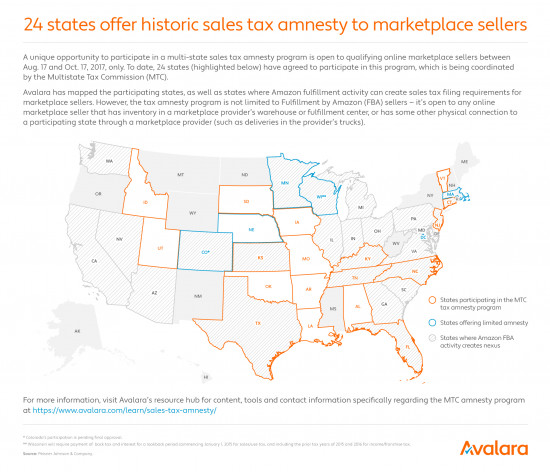