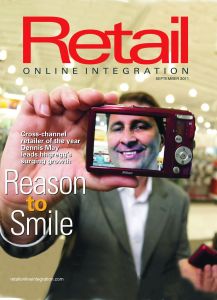 In the July/August issue of Retail Online Integration, I discussed how important merchandising, strong navigation, instigated chat and customer reviews will be to achieving online selling success this holiday season. Here are five more things you should consider doing with your e-commerce site before it's too late.

Abe's Market, an online retailer of natural, organic and green products — from gourmet foods to apparel to home décor and more — had entered into a partnership with Endemol USA, a producer of television and digital programming that's responsible for shows such as "Extreme Makeover: Home Edition," "Deal or No Deal" and "Big Brother."

Chico's was a company in transition at the end of 2009. It was coming off a turnaround year that had seen its net sales grow 8.3 percent, comparable store sales increase 6.1 percent and direct sales jump 39.3 percent. But the women's apparel retailer believed there was more market share for it to grab, particularly online. The challenge was to drive awareness for its three brands, each of which was evolving in its own right.

With today's consumers more likely than ever to be involved with some aspect of environmental, health and humanitarian issues, cause marketing has become a win-win for retailers. Getting behind a worthy cause (e.g., donating to relief efforts after Japan's tsunami, supporting cancer awareness or raising money for animal shelters) can help retailers raise a substantial amount of money for charity while at the same time improve their own brand reputation and, ultimately, grow sales

In June, BIGresearch reported that 89.9 percent of Americans with jobs don't expect to see a pay increase in 2012. As a result, people plan to continue their belt-tightening habits: 58.9 percent plan to spend less on clothing, 53.1 percent plan to comparison shop and 50 percent plan to stay on a strict budget. So, how can you grow your holiday sales while consumers are reducing their spending habits?

How to Approach Online Contests

Contests are a great way to expand a company's marketing reach if the message gets out to the right people. Online promotions of all types, including contests, require a combination of paid advertising and a top-quality network to be successful. The network has to be large enough to generate traffic and interest to make the contest successful. Adding pay per click and advertising on social media platforms is needed to expand your reach. Before your next contest, create and execute a staged strategy to build community and interest.

Paul Fredrick, a cross-channel retailer of men's tailored clothing and accessories, is returning to its roots as an old-school direct marketer to acquire new customers — albeit in a slightly different medium.

PureFormulas.com, an online retailer of health supplements, has realized a 30 percent increase in sales and a $30,000 reduction in ad spend since implementing a search program that focuses on in-stock inventory.

For the last 25 years, Dennis May has been involved in the retail industry — and he's loved every second of it. From his modest beginning selling audio equipment to help support himself while in college (that was the cool job at the time, May recalls) to his tenure today as president and CEO of one of the fastest-growing cross-channel retail brands out there, the one constant has been retail. But that's just part of the reason we've chosen May as our 2011 cross-channel retailer of the year.

Retailers in Search of Another Type of Green

Lately the staff and I here at Retail Online Integration have been hearing a lot about retailers' environmental initiatives. Consider the following, all of which have been announced in the last few months.

The Lost Art of Effective Cataloging

Producing catalogs using what used to be catalog best practices — is now almost a lost art. Can I cover the lost art of cataloging for you in 1,000 words? No way. But I can lay out some best practices to help lead the way.

The U.S. Postal Service has just wrapped up a postage sale for various mail pieces that included a QR code. When the USPS made the announcement, several respected and knowledgeable B-to-B cross-channel retailers asked me what a QR code was and why is the USPS so interested in them.

This summer the U.S. Postal Service provided cross-channel retailers with its January 2012 software release overview for customer-facing postage systems such as PostalOne after hearing from mailers and service providers that software changes need to be made in a more stable, scheduled manner so they could better plan for said changes.