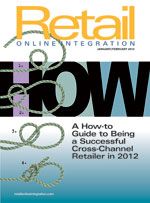 Happy New Year! It’s hard to believe, but 2012 is here and in full swing. Hopefully you had a busy and productive holiday season and are now ready to jump into 2012 no-holds-barred. Before you get started, however, make sure to check out this guide. We’ve assembled a top-notch group of cross-channel retail experts to offer you their best advice for the year ahead. W

Best Practices for Shipping to Canada

Q: “What are some best practices around shipping orders to Canada? What practices ensure optimal customer service, and what shipping services, methods or providers do you use or recommend? Thanks!”
— Nicholas Cole, vice president of e-commerce, Trinity Road

Caught in the Postal Downstream

In my role as second-in-command with American Catalog Mailers Association (ACMA), I’m often asked by members what they should do about their catalog marketing programs in light of the current state of calamity facing the nearly bankrupt U.S. Postal Service (USPS).

Deluxe went in search of a tool that could help it better measure customer satisfaction by obtaining voice-of-the-customer feedback. After testing a host of solutions, it settled on iPerceptions’ 4Q Suite.

I don’t know about you, but I’m looking forward to a busy and exciting 2012. After all, the past holiday season gave me (as well as plenty of you, I’m sure) a lot of confidence and reasons to be excited about the year ahead.

Get Ready for Green Tuesday 2012

By the time you’re reading this, the 2011 holiday season will be over. As such, you’re probably analyzing what worked and what didn’t during the critical fourth quarter and, believe it or not, beginning to plan for this year’s holidays. When making those plans, don’t forget to add the latest holiday shopping tradition to your marketing calendar: Green Tuesday.

Casual clothing retailer Lands’ End took a social and multichannel approach to acquiring new customers this past holiday season with St. Nick’s Picks, a campaign that offered consumers daily deals and discounts on merchandise. St. Nick’s Picks was complemented with a “12 Hours of Twitter” campaign and Facebook fan contest.

We’re in the midst of the holiday peak — four more weeks of industrywide frenetic selling activity. But while the sales peak ends at Christmas for most direct retailers, the inventory returns peak is just starting.

Rite Aid Promotes Loyalty With Improvements to its wellness+ Program

Rite Aid has incorporated changes to its wellness+ loyalty program aimed to deliver even more value to its most loyal customers. This January Rite Aid debuted Load2Card, a coupon management program that enables wellness+ members to save, manage and redeem Rite Aid and manufacturer coupons available online via their wellness+ card.

Think about it: A century ago, shopkeepers and customers actually knew each other by name since their visits were frequent. Loyalty wasn’t a function of points, deals or discounts, but of service. Relationships were built on trust. Merchants knew their customers’ likes and dislikes and strived to deliver on those preferences. Putting purchases “on account” was done in part because some payments were done via barter and some were handled by the “man of the house,” who settled the account at a later time.