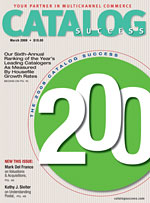 A Chat With March’s Profile, Martin Smith, CEO of MindWare

Catalog Success: Where is the company headquartered? Martin Smith: Minneapolis/St. Paul. Roseville to be more specific — just north of those two cities. CS: What year was the catalog established? MS: I believe Jeanne [Voigt, the founder of MindWare] started it in 1990. It’s certainly not earlier than that; it might have been 1991. CS: What is the primary merchandise offered in your catalog? MS: Toys and games, all of which have some educational or developmental attributes. This could be physical attributes, physical developmental skills, or it could be mental skills … it could be math, it could be more

Click here to listen to our full interview with March’s Profile of Success, Martin Smith, CEO of MindWare.

Patient: Doc, our catalog works great for our core audience. We know this because we get tons of love letters from customers. So why can’t we improve response rates and grow faster? Catalog Doctor: Just like building your body, building a strong core audience for your catalog is important. But if you only work on your core, you may be leaving the rest of yourself weak. Patient: You mean, like strong abs aren’t enough? I also have to build up my arms and legs? Catalog Doctor: Exactly. You must focus harder on selling to your marginal audience, not just your core. Make it

This article assumes that insights gained from Web testing lead to effective print catalog presentations. That is our “Big Assumption.” If you disagree, skip to the next article. No hard feelings; see you next month. Still reading? Good. There are two decent reasons to accept this Big Assumption. First, the Web is so prevalent that the demographics of Web shoppers are pretty much the same as the demographics of all direct shoppers, making the Big Assumption reasonable. Second, the Web offers catalogers their first chance to do real testing. While many catalogers think they’ve been testing for years, they really haven’t been

Editor’s Take: A Take on Acquisitions of All Kinds

“Bring it on!” I thought. Last year, when I presided over our Catalog Success 200 for a first go-round, I was warned that this chart had something of a controversial history during its prior four years. I prepared myself for a torrent of e-mails and phone calls after we published that issue, but to my surprise, we got next to none; only several compliments. Years ago, an editorial director at a company I once worked for said something I’ll never forget: “I love getting hate mail, and hate getting complimentary mail.” I’d have welcomed “hate” mail about our chart, but that’s never our intent

Get a Little Bounce From Bouncebacks

Bounceback programs are often limited to inserting a copy of your most recent catalog — preferably with a different cover — into the fulfillment box. But as shipping rates, fuel surcharges and paper costs all increase, more catalogers are opting against this approach. They’ve run the numbers, and their incremental sales from those catalogs no longer justify the expense. If you’re in this position, or are wondering how to leverage shipping expenses, try a strategically planned and formally managed bounceback program. A bounceback program can help build your brand, improve customer retention and develop a new revenue stream, regardless of whether you’re in B-to-C

Dear Editor, RE: “DMA Drops MPS Fee” that ran in February's IndustryEye, the Direct Marketing Association took the right step by eliminating the $1 sign-up fee, but its Mail Preference Service (MPS) still requires a credit card number to ensure authenticity. There are more than 4 million names on the MPS suppression file, but DMA hasn’t done much to promote MPS to consumers and its membership base. More importantly, the DMA hasn’t made it easy for consumers to have their names added to the do-not-mail list. Catalog Choice’s goal — to stop unwanted mail to help clean our environment — is a worthy one.

Profile of Success: Not All Fun and Games, (But it Comes Close)

WHAT GOT YOU HERE: A background in strategy and contacts. As a direct marketing veteran, Smith got his start in the catalog/multichannel business in 1984 with Avon Products (now Newport News) where he spent nearly 20 years before joining MindWare as CEO in October 2003. Before joining Avon Products, Smith worked at General Electric in an internal strategy consulting role. While there, Smith recalls, “a former senior GE executive, who was the CEO at Avon Products, wanted to recruit people with a GE strategic-planning background. I was interested, and a job came up. That job happened to be in the direct response division. I

No one can deny that 2007 was an eventful year, testing the business savvy and agility of some of the industry’s most seasoned players. Last May’s postal rate jump (with another increase slated for May this year) coupled with a weak U.S. dollar presented significant challenges for catalogers trying to maintain control of production costs. Next to postal rates, paper poses the greatest challenge to most catalogers. The dip in the value of U.S. currency and the strength of the Canadian dollar have led to considerable downsizing among paper mills. Last year, Domtar, Fraser Papers, Tembec Coated Paper Group, UPM-Kymmene Group and Wausau Paper

Strategy: The Art and Science of the Test

When it comes to catalog marketing, I don’t like to leave anything to chance. Just about everything can and should be tested, including promotional offers, cover designs, minimum-order requirements, etc. Knowing what and how to test and retest is important to the success of any catalog. This month, I’ll review a few basic rules of testing, analyze the impact that a test of purchase minimums has on special offers and show how you might set up a test of your own. Bucking the Minimum I often see the minimum purchase to qualify for promotional offers set too high. Instead of encouraging people to order,

Companies of all sorts can quantify their value in numerous tangible ways, from sales volume to store counts to merchandise value and so forth. For catalogers and multichannel marketers who rely primarly on the catalog/online/direct element of their businesses, it's all about growing the housefile. If a multichannel marketer is adding new customers at a rapid clip, that's a winning team you want to be a part of. Launched in 2003, the Catalog Success 200 has always made housefile growth its raison d'etre. So here follows our sixth annual exclusive ranking of U.S.-based catalogers (or U.S.-based catalog units of foreign companies) with the fastest

If you mail at automation-discounted postal rates, your catalog will have to meet a host of new requirements next January, including the USPS’s Intelligent Mail Barcode (IMB). The USPS last month issued its proposed rules on the requirements that go along with automation rates starting in January 2009. It goes beyond the IMB, although that in and of itself is a significant change. The Postal Service’s proposed rules would no longer allow the POSTNET barcode, which has been in use for nearly two decades, to qualify for automation discounts beginning in January 2009. It’s not clear what will happen to pieces

I would have preferred my first column for Catalog Success to focus on good news. But I just can’t describe a rash of businesses that are about to close or sell in 2008 as good news. The 2008 valuations and acquisitions forecast for multichannel marketers looks cloudy, especially for those in the $20 million to $50 million range whose businesses remain print-centric. Paper and postal price hikes imposed last year will likely lead entrepreneurs to sell this year. The Storm’s Here A perfect storm of increased paper and postal costs has conspired to put a chokehold on mailers everywhere, particularly small and midsize