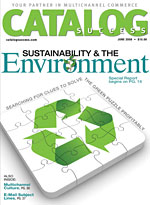 Editor’s Note: This is the second of a three-part series on becoming more adept and adapting to the multichannel world. Part one appeared in our February issue, and part three will appear in our September issue. The world of direct marketing is changing quickly. Whole new analytical tools, benchmarks and ratios have become commonplace in measuring success. You must think cross-channel if you’re to be customer-centered. And above all else, if you’re a stand-alone cataloger or retail store operator, the corporate atmosphere is forcing you to rethink your internal culture. The opposite of a multichannel approach is a channel-centric one, where one channel dominates

PATIENT: Why aren’t catalogs prettier than they are? Isn’t a beautiful design the best thing for my catalog? CATALOG DOCTOR: It’s true that many catalogs aren’t as pretty as they could be. Most important, of course, is what lifts sales. Will beauty improve sales for you? Let’s try to answer that, then look at how to achieve beauty. Look at Leonardo Da Vinci’s famous “Mona Lisa,” acknowledged as beautiful art the world over. Whether from the colors, the proportions or the mysterious smile, it has the underlying elements that make people want to look at it and hang it on their walls.

I chose to devote this month’s column to AJAX, the scorching-hot technology that catalogers should become fully familiar with, if they’re not already. So let’s cut right to the chase and answer six key questions about AJAX. 1. Just what is AJAX? Beyond the Greek hero in the Trojan War, AJAX is a Web programming acronym coined by Web expert Jesse James Garrett in 2005. It stands for “Asynchronous JavaScript and XML.” What, you didn’t understand that little string of technobabble? Let’s take each concept in turn: Asynchronous means the browser can exchange data with your server without reloading the entire page.

Subject lines carry a lot of weight. They drive open rates and results. After e-mail recipients look at your “from” line and recognize your company or service, the next thing they do is look at the subject line to see what might interest them. Let’s examine some of the latest techniques for getting customers past the e-mail client and into your site. Free to Use ‘Free’ In the past, marketers were warned not to use the word “free” in a subject line. The concern was that it triggered spam filters and reduced chances of delivery. Since “free” is the most powerful four-letter

Catalogers’ Updates • Gander Mountain: Twelve years since it last mailed a catalog, this hunting, fishing, outdoor apparel, and lifestyle products and services marketer has returned to the catalog industry. In late April, Gander mailed a 324-page catalog from its Overton’s subsidiary containing products from Overton’s, Gander Mountain and others to more than 2 million customers. Plans call for catalogs carrying exclusively Gander Mountain products to be mailed later this year. The company also expects to convert its informational Web site into a transactional one later this year. • Dell: The personal computer marketer continued its recent cost-cutting initiative by laying off 250 workers

Profile of Success: All Eyes on the Road

WHAT GOT HIM HERE: A failed retail venture. After a toy store in San Francisco in the late 1980s went under, Bauschinger was left unemployed and virtually broke. “I was bankrupt, and the only idea I had at the time was, well, ‘there are these little Schuco [international toy manufacturer] cars and a lot of residents,’” Bauschinger recalls. So he took the little money he had left and placed a two-column, 6-inch coupon ad in the western edition of The New York Times to market the remaining inventory of toy cars. Response to the ad was much better than he ever could’ve imagined,

The ever-so-common phrase “going green” means taking the three basic principles of sustainability and applying them everywhere you can in your organization. These principles, of course, are: Reduce — lower your waste and consumption; Reuse — using items multiple times for the same thing; and Recycle — giving something a second life. Environmental stewardship is especially important because our industry is too often viewed as a culprit. The single biggest thing you can do is to better educate yourself. Ask questions about your production process and the materials that are being used. How much do you know about your paper? Where it came

The title of former Vice President Al Gore’s Academy Award-winning film, “An Inconvenient Truth,” sums up the uneasy relationship between catalogers and environmental issues. Catalogers have embraced environmental reforms reluctantly over the years, because they often come with a prohibitive cost. But the issue of environmentalism and sustainability has reached a boiling point this year, what with environmental groups and a number of U.S. states pressing for do-not-mail legislation. You can’t turn your back on these matters any longer. So we felt it was time to give this key issue the attention it warrants. In the stories below, you won’t just find info

Environmental groups Catalog Choice and ForestEthics are hot on catalogers’ tails. So are state governments, with 18 do-not-mail bills under review in 15 states as of the beginning of this year. As if catalogers didn’t have enough adversity — with postage on the rise again and the economy on the fall — they can’t afford to take the issue of environmentalism and sustainability lightly much longer. That’s why we’ve devoted the cover section to this hot topic. Consider the most recent events: • On Oct. 9, 2007, relative newcomer Catalog Choice unveiled its free, Web-based service to encourage consumers to opt out of

Environmental activists are encouraging the demise of catalogs by promoting the notion that consumers should opt out of receiving them and encouraging lawmakers to put do-not-mail legislation on the books at the state and federal levels. Their justification and, therefore, talking points center on the allegation that catalogs are killing trees, overwhelming landfills and wasting paper. It’s time to aggressively counter their charges. We’re calling on all catalogers to step up and publicly declare that they’re responsible environmental stewards. The catalog/multichannel community can’t sit by and let the success of one of the most beloved methods of direct marketing be tarnished by emotional

If you’ve yet to confront the challenge of measuring, reporting and improving the environmental sustainability of your printed catalog, here are six things you can do on your own to minimize the negative impact of your business. 1. Design efficiently. Combine bind-ins and ride-alongs with your catalog in a polywrap to reduce the number of separate mailings and the paper needed for those mailings. 2. Move with customers who move. According to the U.S. Census Bureau, about 14 percent of the population changed addresses last year. Nearly 33 percent of these people didn’t report their new addresses to the U.S. Postal Service, which

Start with the premise that catalogs and the Internet are interdependent and not adversarial. Remember the brick-and-mortar days when retail channels thought they should receive credit for catalog sales within their trading area? The Web vs. catalog debate is just as silly. Catalog/multichannel companies today recognize the importance of having an e-commerce presence, and many successful dot-coms now have a catalog or are starting one. The best run companies maximize both selling channels. This month, let’s explore how to manage those channels together, including mailing strategies for catalog/Web customers, internal allocations to both channels, the importance of matchbacks and profit contribution by

Your Company: The Next Generation

An exit strategy isn’t just for those thinking about retirement. What happens if the business owner — due to an unforeseen life event — is suddenly unable to carry out his or her responsibilities? Less tragically, some business owners may begin to feel their talents are better applied to a new venture, requiring successors to take over their existing posts. The good news is that succession planning is closely linked with growth management. “The things that you need in place for a transition to a successor are the things that you need to operate a good business: a solid technology base with