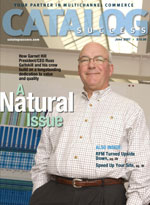 © Profile of Success, Catalog Success magazine, April 2007 Interview by Gail Kalinoski Catalog Success: When was the catalog established? David Lorsch: The company and the catalog were formed concurrently in 1989 with my fiancé and now wife, Cindy. Our first catalog order was Sept. 29, 1989. The order came from a dealer in Clovis, New Mexico. CS: How did the company get started? David: I was out of work. I had been working in national sales for a video accessory manufacturer. When I started thinking about what I could do, I realized there was a gap in the electronics accessory

Some of the most exciting layouts and page designs in the catalog industry are happening in B-to-B. And you’ll find them in some unlikely places. It used to be that B-to-B catalogs essentially were commodity lists of products. Today, however, the best B-to-B catalogs take all of the tricks used by their B-to-C counterparts and make them work harder. Here are two quick tips to help you freshen your design and improve sales. The order of products in your catalog acts as either a welcome mat or a do-not-disturb sign to customers. For customers, the order process begins in two places — your

Boost Sales and Shopability via Photography and Merchandising

Two more tips to help you freshen your design and improve sales. Photography The best B-to-B photography tells a story. You can tell a story by showing the product in use, by showing comparisons and contrasts, and by showing the drawbacks of not using your product. Just like great copy, B-to-B photography should be benefit-driven. Metalcraft, based in Mason City, Iowa, sells a line of commodity items that it manufactures: I.D. plates and barcode labels for fixed assets. Yes, creating drama with I.D. tags poses special challenges, but the catalog pulls it off nicely. On its back cover, a hand wearing a heavy-duty rubber glove uses a

E-commerce Insights: Speed Up Your Site to Sell More

Speed is an often-overlooked component of Web site usability. Users perceive faster sites as more functional. Usable Web sites sell more. If a site responds quickly, users are less likely to abandon ship if they get confused. Case closed. Read on! Best-of-class organizations, such as Google, Craigslist and Amazon.com, deliberately strive for site speed. Regardless of your size, your Web team can and should do the same. There’s no “magic bullet” to speed up your site, however. Speed comes from implementing many simple changes. Here are four broad strategies and 24 tactics to speed up your site. Strategy 1: Manage for Speed

Throughout my years covering this business, I’ve often had to elaborate to friends or family members on just what market I cover — or for that matter, what I do for a living. I’d try to explain and it would take them a little while to understand both what the catalog market is and what I do. “Catalog what? What’s yer catalog?” “No, no. I’m with a magazine that follows the catalog business. Y’know, L.L. Bean or Lands’ End. Or, surely you’ve heard of the old Sears Wish Book?” “Ohhhh! You work for Sears. Nice! Are you in the appliance department?” “Ughhh …” In the past, it wasn’t always

Your Web server runs quickest when serving static pages. Dynamic pages generated from database queries typically are slower by an order of magnitude. Wherever possible, use static pages. Use smart caching to minimize page builds. For example, consider regenerating your homepage once each hour, serving the pregenerated copy the rest of the time. If you do this, then determine how much it would increase the speed of your homepage, and how much load it would take off your database servers. Could you use this technique for other pages? → Consider serving static pages for visitors who accept JavaScript. Then use asynchronous JavaScript and XML, a Web

How Pottery Barn Sites Got Noticed

“For a company like ours that has very strict ROI goals and standards, it was really important for us to be in there with natural search,” says PotteryBarn.com Marketing Manager Karen Shea, explaining how the company’s PotteryBarn.com, PBTeen.com and PotteryBarnKids.com sites reevaluated their natural search optimization performance last year. When its sister brand Williams-Sonoma drew positive results from a natural search solution, Pottery Barn’s marketing team began considering its own program. Pottery Barn came up with four goals: 1. Dramatically increase indexation levels on Google and other major search engines. 2. Increase total search traffic to each of the three e-commerce sites. 3. Increase total natural search

Catalogers’ Updates PetSmart: The multichannel pet supplies retailer in late April sold its State Line Tack equine assets to PetsUnited, a holding company for a Web-based marketer of pet and equine products, including Dog.com, Fish.com and Horse.com. PetsUnited plans to move the State Line Tack online and catalog business from Brockport, N.Y., to its Hazelton, Pa., facility by July. Cutter & Buck: This apparel cataloger/designer in April agreed to be acquired by the Sweden-based New Wave Group AB, a designer/marketer of assorted apparel lines for the corporate promotional and consumer retail markets in Europe. Under New Wave Group’s ownership, Cutter & Buck

An impromptu trip from Denmark to England started it all. It was the summer of 1973, and while traveling in Denmark, Grant Dowse and Pegge Kirschner decided to take a road trip to England. To make the car comfortable enough to camp in, they bought, among other things, a cotton flannel sheet. They eventually brought the sheet home with them, and later ordered a similar item from an American mail order company. But it wound up being a synthetic version of the English flannel sheet they’d purchased in Europe. That transaction inspired them to launch their own mail order business. Married three years

Pointers From the Pros: Printers Offer Their Tips for Mailing Smarter

Printers are full of useful (and free) advice for their catalog clients. Their suggestions range from doing more customizing and co-mailing to learning more about how the postal rate increases are affecting catalogers. Here are some of their top tips for catalogers: 1. Consider a trim cut to get into co-mailing. “Even a minor trim size modification may allow them to mail with other catalogers and save postal dollars,” advises Dave Blais, senior vice president of sales and administration at Quad/Graphics. 2. Make it personal. Customizing and personalizing catalogs is a growing trend, Blais notes. But more catalogers should consider it to increase response. “Some

With the latest postal rate increase weighing heavily on catalogers’ bottom lines, you’ll be needing advice on how to mail more efficiently. While list brokers can offer considerable guidance on which lists to rent, printers are another key source for money-saving tips. Naturally, the issue du jour is the May postal rate hike. Printing company officials say that the postal situation has given them a chance to collaborate more with their catalog clients. Now more than ever, printers are giving catalogers input on co-mailing, customization, paper selection, trim size, and even list hygiene and database management. “I’ve never seen so much conversation and reaction,” Rick Dethloff,

BACKGROUND: “In the late ’80s, I realized there was a gap in the electronics accessory distribution market,” says David Lorsch, founder, president and CEO of DBL Distributing. “There were a few people in the Eastern U.S. that were growing the market via catalog and flier. But there was nobody in the West. Around the point I started my company in 1989, there was no distributor specializing in accessories to independent retailers west of St. Louis. I identified what I perceived to be a hole in the market. And luckily, I was right.” BIGGEST INITIAL CHALLENGE: Finding a customer. “I really started with

Replogle Globes, a cataloger of globes and other classroom tools, encountered several problems when it came to its 24-page catalog. The book wasn’t updated frequently — the last issue was dated 2004-2005 — and the layout made it difficult for buyers to find what they were seeking. “The products went from most expensive to least expensive in the catalog,” says Maureen Kehoe, Replogle’s direct market manager. “By the time educational purchasers got to the back of the book where there were products on an entry level, they’d probably lost interest.” Replogle, a B-to-B cataloger that only sells to dealers, hired Madison, Wisc.-based Planet Propaganda, which had

For many years, the recency/frequency/monetary value (RFM) formula has been the cornerstone of catalog circulation plan segmentation. But what if this is no longer true? What if recent customers actually respond to your catalog mailings at a lower rate than older customers, frequent customers at an even lower rate, and higher spending customers even lower? No, I’m not kidding. This is happening right now and you may not be aware of it. A brief review of the age-old formula is in order. First, recency. It’s been the most powerful predictor of the likelihood of a customer placing another order. For example, for one typical

Strategy: Anatomy of a Marketing Test

Testing is the way to the promised land. Without testing, you’re up a creek without a paddle. Although some elements are easier to test than others, just about everything can be tested. Properly structuring a test is a whole other matter. It means testing only one variable at a time. It requires focusing on keeping all elements the same, except for the one variable being tested. If you’re testing two offers against one another and against a control group, for example, be sure all variables and conditions are the same for each test group. As far as the difference between a control