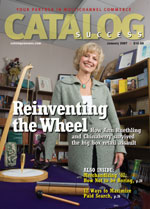 © Profile of Success, Catalog Success magazine, 2007 Catalog Success: When was the catalog established? Frank Glaser: James’ and Fralingers are two of the oldest candy companies in the United States. Both of them were started in the 1880s on the Atlantic City boardwalk. Both claim to be the originators of salt water taffy. But the only similar is me. We still market them differently. We keep the look of the two companies separate, and we still use different formulas for the candies. They are different products, we just put them together in our catalog. I own both companies. CS: When did

While it’s widely known that hard-sell e-mails with product offers can be effective, at least one cataloger successfully focuses 80 percent of its e-mails on providing benefit-driven content, such as style guides and recipes, which isn’t directly sales-related. The e-mail campaigns that Monroe, Wis.-based multititle cataloger The Swiss Colony develops for 10 of its catalogs take more of a soft-sell approach that works. Aside from its namesake food gifts catalog, Swiss Colony's catalogs include Seventh Avenue (home furnishings, clothing, jewelry), Midnight Velvet (budget jewelry and gifts), The Tender Filet (gourmet foods) and Ashro (Afro-centric women’s apparel), among others. Designed to develop good relationships between Swiss

The past decade hasn’t been good to small booksellers — catalog or retail. Soundly beaten in price, selection and convenience by volume-driven big box retailers like Barnes & Noble and Borders, as well as online retailers such as Amazon.com, many of today’s smaller booksellers are barely hanging on. But at least one small cataloger has found a way to reinvent itself and thrive. Chinaberry, a two-title cataloger of children’s books, educational toys, and spiritual and inspirational gifts, has found its own path to modest growth over the past couple of years. The company mails a namesake catalog that offers children’s books and toys, and

For smaller catalogers like Chinaberry, the Web can certainly be the great equalizer. Here are some tactics used by Chinaberry’s namesake children’s books and toys catalog and its spiritual gifts catalog Isabella. Search engine marketing: Both catalogs use Google AdWords for prospecting. “Google is the most compatible for us in sending us our types of prospects,” he explains. “MSN is starting to do well, and everyone is waiting for the Yahoo! paid search relaunch. We’ve had Yahoo! on hold for a few months until its ‘Project Panama’ has its full rollout.” Affiliate marketing program: Using Performics’ tracking system, Chinaberry can monitor the online relationships

They say “don’t judge a book by its cover,” but with a catalog, you must. A catalog has about three seconds to inspire someone to open it — or toss it. My first impression of the Botanic Choice catalog is chaos. This catalog, which sells nutraceuticals, vitamins and supplements, features no fewer than nine fonts and 12 point sizes, a free shipping offer call-out, a free shipping coupon, and seven products — and that’s just on the cover! Perhaps people who shop this category respond to this type of visual onslaught. But my initial impression is that shopping from this catalog would be like

For many catalogers, paid search will be the single most important channel for new customer acquisition this year. Here are what I believe to be the 12 best ways to do it. 1. Focus on Google. The reality is, Google controls more than two-thirds of the search market and is growing rapidly. Yahoo! continues to lose market share each quarter. MSN is a far distant third. Ask.com is even further back. Allocate your attention proportional to your ad spend. Don’t completely ignore Yahoo! or MSN, but invest the most love and attention in your Google campaigns. You’ll be rewarded with the largest return for your time.

u Specialty retailer Genesco in October launched a catalog for its children’s shoe division, Journeys Kidz. The 20-page catalog initially mailed to more than 200,000 homes. u Online pet gifts merchant Chimpfeet.com launched its first catalog in November. Online since July, the new, 32-page print catalog was mailed to 50,000 customers who had requested it. u Jergens, a manufacturer of standard precision tooling components, in November launched its first Chinese language product catalog. The 500-page book was prepared and translated with the help of Chinese fixturing and design engineers, and coincides with the establishment of Jergens distribution and trading division in Shanghai, China. u Maryland Correctional Enterprises,

Industry Eye: Letters to the Editor

On Dell’s Service Woes Dear Editor, We read your editorial in the November issue and acknowledge that some of our customers, like you, haven’t received a positive experience when dealing with our customer service group. We’re making a sincere effort to address these concerns, as well as making a significant investment in our customer service organization to ensure that we consistently provide an excellent experience. In fact, this year alone, we have invested $150 million toward retraining our customer care and technical support teams, establishing additional vehicles for our customers to interact with us, and many more initiatives that are significantly

Customers want to be stimulated, surprised, intrigued, involved, entertained and loved. “Just don’t bore them,” says Kevin Roberts, author of “The Lovemarks Effect: Winning in the Consumer Revolution” (powerHouse Books, 2006). As you draw up merchandising plans for the new year, use these words as a lens to view all brand-enhancing merchandising strategies. You’ll be surprised to discover you usually have more work to do to be truly customer-centric. Below are six timely merchandising strategies to focus you on delivering an inspired merchandising experience. 1. Break through your customers’ continuous partial attention (CPA). Customers not only are multitasking more these days,

Profile of Success: A Cataloger Who Sticks Taffy Pulls a Profit

Background: The fourth generation in his family to run the business, Frank Glaser has led James’ Candy for more than 35 years. He grew up by the beach in Atlantic City, N.J., and gradually took over the business from his father and three uncles. In 1991, Glaser acquired Fralinger’s Salt Water Taffy, the James family’s longtime rival in the taffy business — both businesses were established along the boardwalk in the 1880s. Then in 1999, Glaser decided to cash in on traditional holiday season mail order sales by launching a full-fledged catalog. Biggest initial challenge: Initially convinced he could figure out everything

Strategy: Should You Purchase Your Own Paper?

Purchasing your paper direct through a paper merchant might be a way to save money, but it’s not for all mailers. This month, I’ll help you determine if you’re a candidate to purchase your own paper and what it can mean in terms of savings, as well as the risks and common misconceptions associated with it. While printers traditionally have been more qualified to purchase and manage paper than most small- and medium-sized catalogers, the management and economics of purchasing paper have changed in the past few years, often making it wiser to buy your own paper. Paper merchants have made it easier to

The Editor’s Take: Redefine Your Catalog, Don’t Replace It

During the holiday ’06 season, more than one assessment in the consumer press about the healthy state of the print catalog made reference to Mark Twain’s legendary reaction to seeing his own obituary in 1897, “The reports of my demise were greatly exaggerated.” As a metaphor for the print catalog, it’s a pretty accurate quote. Nearly a decade since e-commerce Web sites were first tooled to process orders, it’s safe to say that the role of the print catalog has largely been recast. And unlike what so many free-speaking soothsayers were forecasting in the late ’90s, Web sites didn’t replace catalogs after all. (A somewhat

Despite the passage last month of the Postal Accountability and Enhancement Act, mailers soon will be faced with significant changes to the U.S. Postal Service’s Domestic Mail Classification Schedule, the document that serves as the regulatory framework for all postal rates and classifications. In my last column (“Beyond Rising Postal Rates,” October 2006 issue, pgs. 66-67), I shared some of what the USPS proposed in its current postal rate case. Postmaster General John Potter has said that mailers should be ready for new rules and rates to be implemented by May 7. Prudent mailers will get ready to adapt to many changes by early May. Part

As B-to-B sales often aren’t as discount price driven as consumer sales, e-mails to a business audience can’t necessarily tout the latest promotional offer. Myriad other sales channels complicate the situation, making the decision of what and how often to e-mail even more perplexing. Following are successful e-mail communication strategies from three B-to-B catalogers and how they decide what kind of e-mails to send. VWR International The two-year-old e-mail marketing program at this scientific equipment catalog generally is coordinated around specific events, such as catalog mailings or buying cycles, says Lynn Homann, VWR’s director of marketing communications. “If we’re selling into the food and beverage market