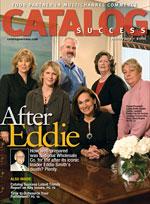 7 Signs You Should Consider Outsourcing Your Fulfillment

Hard times often require difficult decisions. Given the weak business environment and challenges facing multichannel marketers in particular, many have had to make tough choices to cut costs, with outsourcing being one of the options for doing so. Whether in good times or bad, however, outsourcing your order management, call center and/or fulfillment operations is one decision that requires careful consideration. Here are seven signs that you should think about outsourcing fulfillment:

Our entire interview with industry veteran Brendan Edgerton, including what he believes the catalog industry must do to remain relevant in these uncertain times

Professionally, Lynda Swann will never be another Eddie Smith. Then again, she won’t have to be. The support system her father fostered and nurtured during his 50-plus years running the women’s hosiery and apparel catalog National Wholesale Co. runs so seamlessly that Swann handles her role as president with relative ease.

Focus on the Fundamentals

Instead of anticipating the doom and gloom of market conditions no one can predict, stay focused on the fundamentals to get through these tough times, and position yourself for greater profitability when up markets return. Simply put, it’s a matter of what you know, when you know it and what you do about it.

It’s as if Eddie’s Still There

Like many entrepreneurs who launched catalog businesses in bygone eras, the late Eddie Smith, whom I had the pleasure of knowing during the ’90s and early 2000s, stuck firmly to a number of ironclad principles during his 50-plus years at the helm of the National Wholesale catalog.

As in our October 2008 issue, this month’s Catalog Success Latest Trends Report on Key Issues gives you a good apples-to-apples comparison to the results we received from this same report a year ago. Simply look for the percentages in parenthesis that follow each new result.

The Best Print Circ Strategy for 2009

I’m optimistic that 2009 will be a better year for multichannel merchants, even though the experts say our recovery will be gradual. There are bright spots within given merchandise categories, such as religious goods, pet supplies and hobbies — all of which are doing well — just to name a few.

Have you ever walked into a store and felt like you’d stepped into that company’s catalog? Or visited a familiar company’s Web site and intuitively known where to find what you need because the site’s organized just like its store across town? Regardless of channel, your experience is the same: You experience that brand.

A client recently called me in a panic. The company often personalizes its e-mails, but this time the send button got pushed too fast. Instead of the recipients’ first names being nicely displayed, the e-mail showed “[FIRST_NAME].” This company prides itself on its e-mail program and customer relationships, and felt this would tarnish its image. That client decided to immediately send a second e-mail with an apology, which went out about three hours after the error occurred.