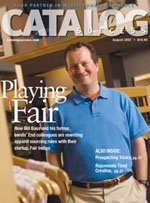 A Chat with August’s Profile, Kassie Rempel, founder and owner of SimplySoles

© Profile of Success, Catalog Success magazine, August 2007 Interview by Gail Kalinoski Catalog Success: When was the catalog established? Kassie Rempel: The first catalog was mailed in September 2004. It took about a year to educate myself enough to feel comfortable putting something in the mail. The first catalog was 36 pages and now they are always 36 pages. I started with two catalogs a year, one for fall and one for spring. It has since grown. In fact, this upcoming fall, we will have four drops this season. We are working our way to eight drops a year.

Want to increase sales? Increase the frequency of contact with your customers, and coordinate catalog marketing and outbound sales efforts. In B-to-B especially, it can be a powerful, one-two punch. But without a well-planned strategy, one effort can unintentionally undermine the other. Here are four key ways to ensure your sales and marketing efforts are in sync. 1. Brand. Controlling brand in print and online can be relatively easy compared to controlling it in outbound sales efforts. Use gatekeepers to assure that you maintain a consistent look and voice in your catalog and on your Web site. If a wrong font or color slips into

Catalog Doctor: A Pep Up Prescription

Patient: Doctor, our creative has always been snappy — our photos vibrant, copy right on, headlines catchy — and our customers always responded. But lately, sales have been sluggish and customers aren’t responding to our creative like they used to. What’s wrong? Catalog Doctor: Sounds like you folks have a touch of creative lethargy. It can happen to any cataloger. Your creative just needs some pepping up. Let’s run some tests to see which prescription is right for you. It may require a mix of treatments. Let me start by asking (and responding to) a few questions: 1. When’s the last time

One of the most powerful connectors between a seller and a prospect is language, or voice. Of course, it’s the writer’s job to get that communication across in words and ensure that it’s culturally accurate. To speak (write) to your customers and prospects the way they wish to be spoken to can be daunting when you’re not exactly like them — but it’s far from impossible. It just takes a little research. Most of us can tell if someone’s not “speaking our language.” We hate to be spoken down to. This is true both face-to-face and in your catalog. Yet, I constantly see curt and

Certainly over the years, the retail shopping experience has endured many peaks and valleys — plenty more valleys than peaks. But the changes I’ve noticed more recently have gone in the other direction, and catalogers need to adapt quickly. Retail shopping ain’t so bad these days. More stores look better. Even the Lands’ End department in a Kmart I visited in July didn’t look so bad. Service has improved, too. So the gap may be tightening on the edge catalogers/multichannel marketers have long enjoyed with regard to service and shopping ease. Certainly, there always have been exceptions to the notion that retail shopping is a

How Fair Indigo Created a Customer Base

Fair Indigo, whose primary reason for being is that it sources exclusively from fair trade factories, sells nice-looking, comfortable, casual clothing primarily for upper-middle-class women. But so do a lot of other catalogers. So how is the Middleton, Wis.-based cataloger able to find prospects who’ll buy their next pair of jeans from Fair Indigo rather than more established merchants, such as J. Jill or Coldwater Creek? The mission’s the thing, of course. “Part of the process of finding who our customers were was to determine where she’d likely shop,” says Fair Indigo Director of Marketing Terry Nelson. So the cataloger developed a list of prospecting

People On the Move MCM Electronics: Phil Minix has been named president of Centerville, Ohio-based B-to-B catalog distributor MCM Electronics. A member of the Catalog Success editorial board, Minix is a 12-year veteran of the catalog/direct business. He most recently served as president of Astral Direct. Prior to that, he worked at Reiman Publications and J. Schmid & Assoc. Sharper Image: Andrew P. Reich has been named EVP of merchandising. James Sander has been named SVP, general counsel and corporate secretary. Eddie Bauer: Neil S. Fiske, the head of Limited Brands’ Bath and Body Works, has been appointed president and CEO. Fiske, 45,

Letters to the Editor

Dear Editor, Your editorial in the July issue of Catalog Success regarding the American Catalog Mailers Association hit the heart of the issue, why do catalogers need another association? As one of the founding officers of the American Catalog Mailers Association (ACMA), I can only reiterate the questions now that we asked in March when we agreed to create the ACMA: 1. Are we satisfied that the organizations that already exist can fully represent the unique interests of the catalog mailing community? 2. Do we believe that the past rate case could have been more favorable to catalog mailers if we had a voice

Next Stop: The World

With the Internet transforming even the smallest catalogers into worldwide marketing companies, virtually every business at some time or another will be forced to handle international orders. While the process certainly is more elaborate than it is for domestic shipments, it’s not rocket science: Do your homework, avoid unexpected costs. “Today, it’s relatively easy to market and ship overseas,” says Richard Miller, managing partner at North Chatham, Mass.-based Market Response International, an international direct marketing consulting and research firm, and also executive director of the International Mailers’ Advisory Group. Mailers’ ability to communicate quickly with customers, acknowledge receipt of orders and address problems “has become

We may be quite far removed from the, “We all wanna change the world” 1960s, but a group of former Lands’ End executives and employees last year did set out to change the world — the world of multichannel apparel sourcing. A year since its formal launch, Fair Indigo, a marketer of casual apparel, has stuck to its passion of complying with the rules of fair trade in apparel manufacturing. Headed by former Lands’ End senior vice president of international and e-commerce, Bill Bass, the Middleton, Wis.-based cataloger/multichannel merchant’s raison d’être is to only use apparel manufacturers that pay more than the

Profile: Building a Catalog From the Ground Up

BACKGROUND: In 2000, Kassie Rempel started her own financial planning business, working with five affluent families. In 2002, “One family asked me to work with it full time and help the spouse set up and run an exercise studio and day spa in the D.C. area,” she recalls. The next year, she transitioned out of financial planning and into cataloging. “The topic was always shoes,” says Rempel, who in ’04 founded the SimplySoles shoe catalog. “I found that I was doing more shopping personally through catalogs and via the Internet,” she says. “I decided that if that’s where I saw myself doing most of

Prospecting: Teach an Old Trade New (and Not so New) Tricks

Imagine copying the names of doctors and lawyers from the phone book and mailing them a crude, black-and-white catalog. John Figi, founder of gift food cataloger Figi’s, did just this —and was rewarded with a response in excess of 10 percent! That was in the 1940s, when Americans were starved for retail options. Fast-forward to 2007. Companies have more than 20 square feet of retail space per capita. Customers and prospects have thousands of Web sites from which to order, as well as about 10 to 20 catalogs delivered weekly. Naturally, it’s small wonder that prospecting response rates are declining. So, just what techniques

A headline of the July 5, 2006, edition of USA Today reported that we are now a nation of 300 million people. By 2025 the U.S. population is projected to reach 350 million; 400 million by 2040. With the population growing, why is it more difficult to prospect cost-effectively, and why aren’t universe counts increasing? This month, I’ll discuss ways to expand your prospecting universe, even when the print catalog market size doesn’t seem to be growing. According to Abacus, catalog households are declining as overall households are increasing. With more buyers ordering via the Internet (not necessarily the driving media), the count

Will Fair Trade Catch On?

Bill Bass, president/CEO of fair trade apparel cataloger Fair Indigo, offers catalogers and other multichannel merchants looking to source through fair trade factories, several tips and insights into how and when the fair trade apparel market might develop in the United States. Catalog Success: How do you do it? Bill Bass: Find the factories. There’s not an installed base of factories out there that treats its employees well. You have to go out and spend a lot of time finding them. It takes a lot of work. You have to want to do it and do it enough that you’re willing to figure out other