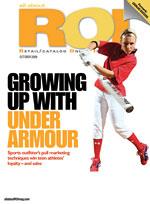 10 Steps to a Better Holiday Season

It's no secret that up to 40 percent of most merchants' annual sales occur in the critical fourth quarter holiday period, according to industry estimates — most in the six weeks prior to Christmas. With this, seasonal customer demand is an opportunity to increase sales, reduce back orders and cut down end-of-year overstocks with well-managed forecasting and inventory planning.

6 Ways to Force the Issue

There are two things that almost every marketer doing business online is obsessed with these days: social media and conversion. And that's not in reference to social media's conversion/return on investment, because really, why be obsessed with something that's typically negative or flat in terms of contribution? So in reality, the obsession should be all about website conversion, compensation and measuring what matters. Here are six surefire tips to help you measure site conversion:

All Hands on Deck

There's growing pressure on list performance. It's more about contribution to profit and overhead, as it should be, but this has caused mailers to reduce circulation and prospect less. As a result, 12-month buyer counts are down, and there are fewer housefile names to leverage — a real dilemma. Here's how to improve list performance for email and print.

Are You Paying Enough Attention to SEO?

Pure-play websites crush classic direct marketers when it comes to search engine optimization (SEO). Most produce 50 percent or more of their total sales this way, garnering millions in revenue. Many direct marketers view their sites as cash registers where shoppers go to check out. They've either ignored or only paid lip service to SEO.

Problem: Woodland Hills Wine Co., a multichannel seller of vintage wines and spirits, lacked a sophisticated e-commerce site to complement its retail store. Solution: Redesigned and relaunched its "antique" website. Results: In the first six months of business following the site's relaunch, online transactions increased 11.4 percent. In the first half of 2009, online visits were up 39.8 percent, with conversion rates 1.5 percent greater than the same time last year.

Growing Up With Under Armour

Today's teens have been inundated from their earliest recollections with advertising, be it on TV, online, in their favorite video games and movies, and the list goes on. To effectively sell to this generation of consumers, Under Armour studies what makes it tick. What are teens thinking about? How do they behave? What motivates them to purchase?

How Little Is Too Little?

With a most challenging holiday shopping season looming, one of the trickiest tightropes this year will be inventory planning and management. That's an ongoing catch-22 in good times or bad. But this year will be more challenging than most in recent memory. How much inventory will be enough? How much will be too much, leading to potential overstocks? How tight can you get without frustrating online or catalog shoppers  with back orders, or store shoppers due to slim pickings on the racks?

When I first started working in Manhattan in the — ahem — late '80s, I received a certain thrill when friends "in the know" would call me about a private sample sale taking place in a warehouse downtown. Who knew what bargains awaited? Who would be there? What kind of cool, one-of-a-kind items would we find? (Who needed Loemann's?)

There's nothing today's customer dislikes more than falling into the gap between a company's online and offline operations. Feeling stranded, abandoned and disrespected, even previously loyal customers start looking elsewhere when channel conflict gets in the way of their needs. Customers want a coherent, seamless and positive experience — not your conflict.

For merchandise sellers not rooted online, alternative payment programs such as PayPal and Bill Me Later once carried the stigma of being designed primarily for consumers with bad debt. But as representatives from two major integrated retailers, American Eagle Outfitters and Orvis, noted during a session at August's eTail Conference in Baltimore, that's no longer the case.

A recent federal appellate court decision concluded that the  removal of a product's universal product code (UPC) may constitute a trademark infringement. In Zino Davidoff SA v. CVS Corp., decided this past June, the court supported claims of a high-end distributor of luxury fragrances because "the UPC acts as a quality control mechanism which enables [the trademark owner] to protect the reputation of its trademarks by identifying counterfeits and by protecting  against defects."