What Voice Shopping Skeptics Are Failing to See

The future of commerce is sitting on your counter. That’s right, Amazon Alexa, the familiar voice assistant who tells you the weather forecast, will also help you purchase a new umbrella.

That was the consensus, anyway, until a recent viral statistic caused some backpedaling. According to a recent report by The Information, “just 2 percent of consumers with Alexa devices made purchases by voice.” And of that 2 percent, “only 10 percent purchased again.”

So is voice shopping really all hype? Not even close.

It makes sense that a miniscule fraction of Amazon.com's total commerce would be happening via the Alexa platform. It’s been reported previously that the voice assistant is used far more for streaming music and searching the weather than it is for shopping. And the reason is rather obvious to anyone who has actually tried to purchase something on a traditional Echo device. The back-and-forth of a voice-only interface makes for a frustrating shopping experience and prevents the consumer from conducting product research before making a purchase decision. It’s only when repurchasing or adding very simple items to a list that voice shopping seems remotely practical (if you haven’t tried it, you ought to).

That’s why many retail experts have jumped on voice shopping as unworthy of all the hype. One Forbes contributor called Alexa “a cool technology still in search of addressing a real customer need at scale.”

Here’s the problem: aside from the obvious appeal of breaking with the mainstream opinion, critics are again falling victim to the assumption that Amazon is playing in the short game. And you know what happens when you assume.

The Future of Voice Shopping is in Sight

Amazon is in no rush to make voice a ubiquitous platform for shopping. Instead, it has made market penetration and engagement its No. 1 priority during Alexa’s infancy (remember, the first Amazon Echo launched less than five years ago). So far, Amazon has been extremely successful at meeting its goal. As of 2018, over 25 percent of U.S. shoppers own a smart speaker device, representing a 77 percent year-over-year increase. Amazon is also dominating the market over competitors like Google, with 63 percent of smart speakers in the U.S. being Amazon Alexa devices.

Amazon sees voice and gesture technology as an inevitable shift in society’s relationship with technology, but one that's unlikely to happen overnight. Integrating its platform as the default is an obvious long-term play. It’s only with established engagement and a scaled platform that Amazon will begin creating a larger lane to monetize voice.

Nothing demonstrates that upcoming shift better than the recent introduction of screens on Alexa devices. Amazon’s launch of the Echo Show 5 features a 5.5” screen and costs just $89.99 compared to $229.99 for the Echo Show (the initial screened Alexa device). Priced just $10 more than the standard screenless Echo, the new Echo Show 5 is a massive step toward a better experience for voice shoppers. 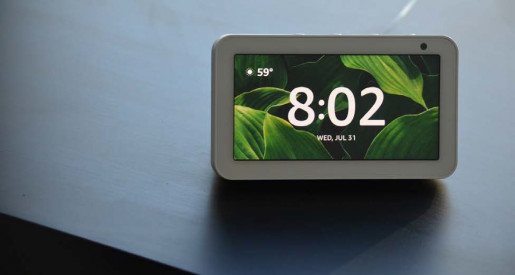 With a screen to view, the most challenging dynamic of voice-based shopping has a resolution (no pun intended). Shoppers can ask Alexa to browse through products and get a similar visual experience to that which they're accustomed to on desktop and mobile devices.

Right now, the visual interface for Alexa is a simplified version of what you see on a desktop. There are primary and secondary photos of products and basic bullet points, but little else.

The primary input remains the user’s voice, while the output is voice accompanied by a basic visual aid.

Though users can control the interface with the touchscreen, the navigation is limited as the platform is still meant to be operated with voice. In other words, rather than hearing about the product you hope to purchase, the new screens allow consumers to see the product before they say, “Alexa, add that to my cart.” Based on my own experience with the new device, that’s a phrase you’re about to hear more often.

Screens are just the beginning. As Amazon continues harnessing its growing Alexa platform for commerce, its ability to integrate voice assistants into the lives of consumers will become more of a priority.

Most people experience Alexa through Echo devices. However, those devices are just the initial vehicles for the platform. Alexa’s future isn’t device based. Instead, Alexa will be integrated across everything that you interact with. From your tablet to your TV, Alexa will be there to perform tasks. In your phone, your car, your workplace … Alexa will operate best when it transcends constantly shifting locations and contexts. At that point, commerce is inevitable. With products and services available at any time, virtually on-demand, via a seamless interface, commerce through Alexa will surge from 2 percent to the majority of all transactions.

For now, Amazon will continue optimizing the shopping experience with Alexa devices. With an increasing number of actively used devices on the counters of shoppers, Amazon has a wealth of opportunity to test and refine its platform. That’s the benefit of scaling Alexa first.

The difficult part is done. Amazon Alexa has quickly made its way into kitchens, living rooms, bedrooms, hotel rooms, and boardrooms. The lack of commerce currently happening through the device is no indication of the viability of voice shopping. Rather, it's the result of a long-term strategy to place Alexa at the center of a movement of voice commerce. And if that’s not loud and clear, I don’t know what is.

John Ghiorso is widely regarded as an authority on all things Amazon. He's the founder and CEO of Orca Pacific, a full-service Amazon agency that brings cutting-edge strategies to over 100 industry-leading brands like Mars and Reebok.

Related story: Why the ‘Voice Revolution’ Will Lead to a Boom in Voice Commerce

John Ghiorso is widely regarded as an authority on all things Amazon. He is the original founder and CEO of Orca Pacific, a full-service Amazon agency that brings cutting-edge strategies to over 100 industry-leading brands like Mars and Reebok.

After a decade of studying Amazon, Mr. Ghiorso has earned a reputation for approximating industry reaction and forecasting shifts within the Amazon marketplace. His insights have been featured in prestigious publications such as The Wall Street Journal, Forbes, Vox, Digiday, and Modern Retail.

Retailers Shift From Linear to Digital for TV Ads

Customer Experience and Marketing During COVID-19